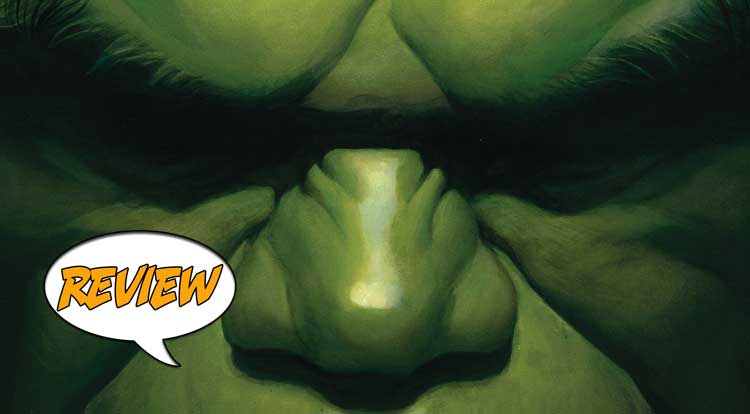 There’s a new Hulk in town.  Or an old one.  Even Banner isn’t sure…  Your Major Spoilers review of Immortal Hulk #18 awaits! Previously in Immortal Hulk: Bruce Banner is trapped inside Shadow Base Site A, powerless and hunted by their top assassin.  He can’t run forever.  He can’t change form.  He can’t survive… without The Hulk.

But not the one you think.

“HE WANTS TO END THE HUMAN WORLD.”

We open in the wreckage of the Shadow Base, as Doc Samson crawls out of the wreckage just in time to be greeted by Walter “Sasquatch” Langkowski and Gamma Flight.  Eight days later, Bruce Banner opens his eyes to find himself in a cab, wearing a tailored suit and a really creepy mustache, all signs that he’s been under the influence of his Joe Fixit persona.  Returning to his hotel, Bruce starts making the list of his personalities, including the current Hulk (who isn’t thrilled at the structure of it all), Green Scar, the savage Hulk, the Professor Hulk and Fixit, needing a full roll call of the voices in his head for their next steps: The end of the world.  Bruce’s ruminations are interrupted by a horrifying new Abomination, perhaps the first to earn the name, one without a head, but with a series of radial fingers like a lamprey.  Oh, and a familiar face underneath.  While Samson comes to terms with Gamma Flight’s new members (The Absorbing Man and Titania, both of whom have tried to kill his friends a number of times), we also rejoin Jackie McGee, who finally finds out what happened to Betty Ross.

It’s almost as bad as The Abomination.

AN ABOMINATION WORTHY OF THE NAME

Al Ewing’s Hulk is just plain scary, you guys, but perhaps the most terrifying part of this issue is Bruce’s suggestion that his new personality go by The Maestro.  That said, nothing here is any less than disturbing, from Bruce and Hulk scheming together to the horrifying Betty reveal to whatever is going on with Langkowski’s facial hair…  It’s all calibrated to freak readers out and it works perfectly.  The art works in perfect concert with the story, though, especially when it comes to the new Abomination, but even the quiet rage burning in Devil Hulk’s eyes is unnerving.  I’ve been reading Hulk comics off and on since the early 80s, but I can’t remember ever being this excited by what might happen next, as these creators have put a stamp on the character that we haven’t seen since his personalities were united in the 90s.  Perhaps the best part of it all is the fact that Bennett and Ewing aren’t jettisoning anything that has come before, instead taking all aspects of the Hulk and making them into a truly engaging ongoing horror/action narrative.  I can’t wait to see them resurrect Glenn Talbot as a Frankenstein or something and making it all work.

BOTTOM LINE: GET ON BOARD

In short, this issue is darn near perfect, making the hero who used to demand Doctor Strange serve him beans into the kind of monster that it’s hard to root for but impossible to not want to read more about.  Immortal Hulk #18 ups the ante one more time, with incredible art and a well-crafted story combining into something entirely new and fascinating, earning 5 out of 5 stars overall.  The fact that this story features a 60-year-old character that we’ve seen in multiple big screen outings, his own TV show and several ongoing series and makes him into something entirely new is really quite amazing.

Hulk fan or no Hulk fan, this is a book everyone should be reading, making the Hulk a true monster in the best sense of the word and defying expectations across the board.