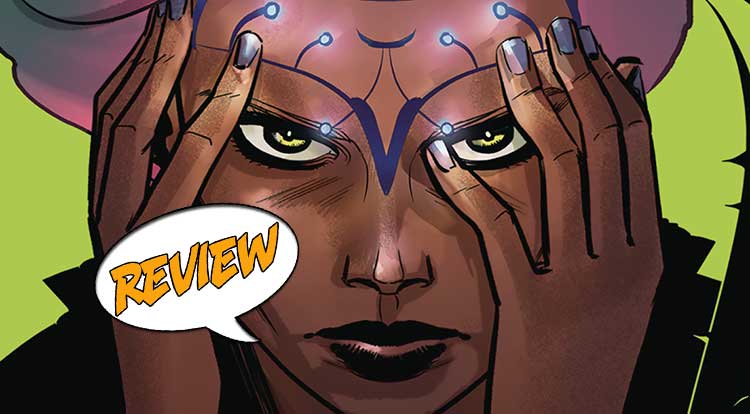 8.0 A Solid and Intriguing Thriller

Queen of Bad Dreams is futuristic in a Bladerunner kind of way, where the nuts and bolts of the world are still recognizable to us, and the beats of a detective story still fit.

Inspector Judge Daher makes a choice to let Ava, a dream figment, go for now. Why is she so important and what is going on? Find out in Queen of Bad Dreams #2! Previously in Queen of Bad Dreams: Inspector Judge Daher Wei is one of the best at the Morphean Annex for chasing down figments – escaped dreams who have reached the real world. Her job is to make the call as to whether they get reinserted into the dream, or they are allowed to stay. Her new job is tracking down a figment named Ava, who came from the dreams of one Emerson Chase, the son of a very important politician. Their first meeting is not so good. Ava runs. Daher does catch up with her, but decides to let her go…for now.

A NEW TAKE ON AN OLD FAVORITE

Queen of Bad Dreams #2 opens in the fashion of a classic “rebellious detective” story – with Daher in trouble with her boss for letting Ava get away. Daher stands up for the independence she has with her job. After all, she’s an Inspector Judge, not a cop. The trouble isn’t so much the job as it is the clients. Daher comes face to face with Councilwoman Chase (Emerson’s mother). Not much is said, but they both seem implacable.

Daher talks things over with her friend West. I like this. For her to bounce thoughts off West is a way for us to see into her head. And what she’s thinking is that the Ava she saw did not match Emerson’s description of a violent rogue. She has questions; she wants answers, and the only way she’s going to get them is by being a detective.

She starts asking around, but Ava has made friends. No one gives Ava away, but we can see that she overhears Daher. So it isn’t a complete surprise when Ava surprises Daher in her apartment. But this gives them the chance to talk. Ava is new to the waking world, and the only person she feels will give her a straight answer is Daher. And Daher does want to hear her story. By understanding both the client and the figment, she may be able to untangle when Ava really started to become an individual, and by extension, what is going on.

Ava’s entire memory is of protecting Emerson Chase. She was strong and powerful, but that’s all she was at first. But then something clicked for her. As Emerson bragged more and more about his money and his power, she realized that his fantasy was telling her about all these accomplishments that weren’t his; they were his mother’s. And things just didn’t seem right after that. One day there was a tear in her reality. She clawed through; she slept; and she dreamed of getting out. And that’s when she reached the real world. She grabbed the files she remembered seeing from Emerson’s dream and ran.

There is a knock on the door, and a number of masked people break in and attack. Ava and Daher fight them off, and Daher realizes something about them that makes her certain they were following her, not Ava, and she wants Ava to get out now, before she calls this in to the Annex.

I do like the way learning about how a figment drops into reality is woven into the story in a way that makes sense with the plot. I also like that the trope of two unlikely partners, if partners they remain though this, is used to bring two very different but very strong women together.

The art of Queen of Bad Dreams #2 is stylish, often using bold but simple linework. Many of the backgrounds are sparse, yet distinctive. And actually, this really makes sense for Ava’s dream world. We don’t lose track of where we are, but full details are saved for a few panels, such as establishing shots. There is some nice use of interesting camera angles to set scenes and to frame action sequences in a way that makes them dynamic.

But something I really, really love from this issue is the fight scene in Daher’s apartment. There are two full pages where the action is drawn with heavy inks, highly stylized, with a bold but limited color palette that really pops. It is quite brilliantly done.

Queen of Bad Dreams is futuristic in a Bladerunner kind of way, where the nuts and bolts of the world are still recognizable to us, and the beats of a detective story still fit. The premise of dreams connecting more directly to the real world, even to the point of becoming tangible is fascinating and adds a new element to such a story.