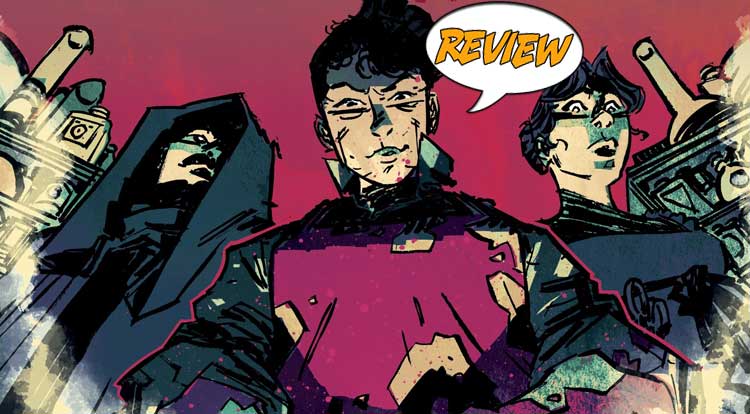 Creator and creation team up, but will their collaboration end in murder? Your Major Spoilers review of Mary Shelley Monster Hunter #2 awaits! Previously in Mary Shelley Monster Hunter: Mary discovers not only that their mysterious host is a surgeon intent on reanimating the dead, but also that she’s a woman. Banished from a career in medicine because of her sex, Dr. Victoria Frankenstein has decided to create a manservant devoted to her success in a misogynistic world. The only thing she needs is a partner. Mary quickly sees the potential to carry on her late mother’s feminist work, but agreeing would mean betraying her closest companions, and becoming an accomplice to murder…
<

Our story opens with a body, graphically displayed to show the massive gunshot wound to the chest and abdomen, transitioning immediately to introductions. Doctor Victoria Frankenstein greets her new guest, Mary Shelley (or, at this point, Mary Wollstonecraft Godwin, as she hasn’t yet married), explaining to her why she has the body of a well-known writer in her laboratory. Victoria weaves a tale of growing up adoring her father as he perfected the techniques of surgery, even wishing to follow in his footsteps. Sadly, in the 1800s, women were prohibited from attending medical school, so Victoria disguised herself as a male cousin and attended college in his name. When he was accused of murder, her charade was revealed, and she was expelled. Worse still, her disgrace caused her father to suffer a fatal heart attack, driving Victoria underground. With her hopes of finding a man who would support her skills and ambitions dashed, Doctor Frankenstein set about to BUILD one, and now she offers Mary a deal: Join her and help to finally create what she hopes will be a fleet of men who can be trusted to help a woman become more than just “a domestic hand and pleasant company.”

I REALLY ENJOY THE VISUALS

This is a really eerie-looking comic, which is appropriate for a reimagining of the Frankenstein mythos. Much of the sequence in Dr. Frankenstein’s lab is lit indirectly, with everyone’s skin glowing an eerie green that reminds me of the Jacob’s Ladder from the 1931 movie version, and when Mary climbs back up the stairs to greet her friends and fiancé, the return to pink skin is startling. There’s an attractively gothic quality to Hayden Sherman’s art and even gorier parts like a realistic Victorian surgery (y’know, before anesthesia?) or the doctor’s latest body and it’s displayed innards aren’t off-putting or gross, but actually fascinating and weirdly beautiful. The story is equally ingenious, making Dr. Victoria Frankenstein’s quest to build a perfect man both understandable and sympathetic, giving a modern feminist twist to the story. It’s also quite clever that this entire meeting takes place during the summer where, in our world, Mary Shelley created the story of Frankenstein, offering an alternate-reality version (with Mary’s explanation for her newfound partnership with Dr. Frankenstein as her helping with the creation of the story for Lord Byron’s spooky story competition.)

THE BOTTOM LINE: IT’S OKAY TO CALL THE MONSTER FRANKENSTEIN

All in all, I was quite impressed with this issue, even with the proliferation of time-traveling Teddy Roosevelts and vampire-hunting Abraham Lincolns in modern mash-up culture. Mary Shelley Monster Hunter #2 is a better-than average affair, with haunting art, really effective coloring and a clever reimagining of the story making for a 4.5 out of 5 stars overall. I’m going to be picking up the coming issues of this series, especially with the last-page reveal of The Monster himself.

A new twist on an old monster, with real-world and in-universe elements intertwining... I like it!