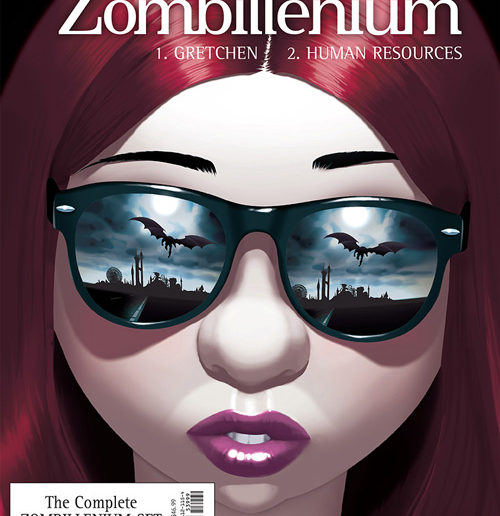 NBM Graphic Novels sent Major Spoilers the cover images and solicitation information for titles arriving over the next couple of months. In the summer of 1807, The Explorer, a ship from Her Majesty’s Navy, recovers a young shipwreck off the coast of Siam. Discovering Abel, who can only remember his name, soon becomes friends with the first officer, acting as a captain because the commander of the ship has apparently absconded with the ship’s treasure. Abel returns to England with The Explorer and finds accommodation at the inn run by the three fugitive captain’s daughters. Well before he can recover his memory, however, he will discover something deeply disturbing about himself, and he will understand the true nature of some of the people who helped him.

A haunting and intense book that digs into the soul of the protagonists as well as the reader, with a generous helping of good ‘ole fashioned salty adventure along with many a shanty sung, and a sprinkling of magic dust. Presented in a handsome old style, worn-looking hardcover, as if taken from a ship captain’s library. An uplifting, enthralling escape. “My name is Tamba Cisso. When I was eight years old, I lived in the village with my father, my mother and my sister. I went to school and had learned to read. I knew there was war in my country, but I didn’t know that children could wage it.”

Providing a testimonial to one of the most heart-wrenching and chilling developments in modern warfare, this graphic novel chronicles the realities of hundreds of thousands across the world, kidnapped and forced to commit atrocities. You too can be a detective! Solve these morbidly funny puzzles where on one page you are presented the crime scene where poor Kenny is assassinated, the next page gives you the answer! How much of an ace are you? How observant are you? A cross between South Park humor and and Where’s Waldo (for adults).

Collected from the Instagram sensation with hundreds of thousands of followers worldwide. 45 cases to solve! Proven totally irresistible! Bob Marley in Comics
By Gaet’s and Sophie Blitman

In the middle of a depressing youth in a ghetto of Kingston, Jamaica, Robert Nesta Marley sees only one way out: music. And that music will be what Jamaica made of rock and pop locally that had hardly been heard anywhere else: reggae! It is Marley who brings the unmistakable beat of reggae to the entire world.

From small stages in Jamaica, his partners of the Wailers accompany him all the way to the most fabulous world tours and adulation. Beyond a rocketing musical career, the most famous rasta wants to shake things up and proclaim all over his humanitarian and egalitarian values.

The next volume in the sellout series that previously featured The Beatles and the Rolling Stones. Specially priced set of the 4 previously released volumes in this bestselling series!

Francis von Bloodt, vampire, a good family man, manages the horror theme park Zombillenium. They don’t just hire anyone, at Zombillenium: mere mortals need not apply, the park works only with genuine werewolves, vampires and zombies. This is what Aurelian gets to discover as, burnt out, deceived by his wife, he ends up hired in spite of himself in this strange business. Gretchen, a plucky trainee witch, helps him get around… “I hate marathons. Hate running. An hour before leaving, I received a text. Instead of ‘Good luck,’ it was ‘We’re finished.’ So, I went to a bar next to the subway on 95th. Had a few bourbons with some other mope. Then I got on a bike. I took off down the old Highway 750, the Lincoln Highway.”

Forget Route 66. This is the original cross-country highway that takes you through REAL America, the first to cross all of the US from the Big Apple to the City on the Bay. This is THE road trip. On a bike. This comics biography of one of the greatest sculptors who ever lived is done with the collaboration of the Rodin Museum and includes a preface by its director. It views his life through the eyes of the three women who shared his life for good or for bad. One was his lifelong on and off companion, the other two his muses, one of which was Camille Claudel, a well-recognized sculptor herself.

Rodin’s work was revolutionary in conveying exceptional passion, transcending the stone. Here’s how that happened.