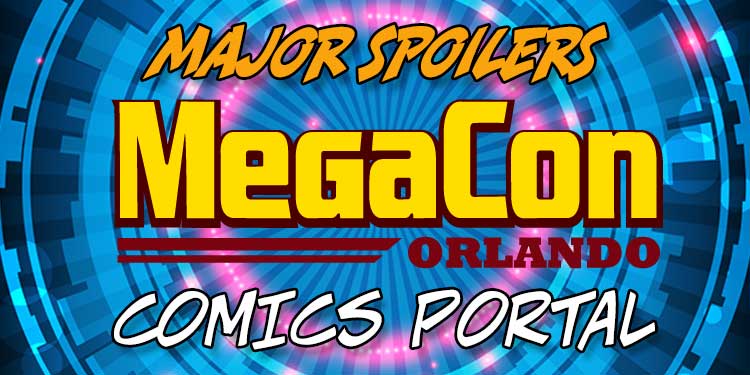 This past weekend, I attended MegaCon 2019 in Orlando, Florida, and it was something!

To the folks I know, it was a huge success, with many exhibitors and creators having the most successful con of the year, on several levels. For many, they made more money than at any other con in 2019. They also made some great connections as well! So it was a big one for many of the folks on the “business” side of the table.

Based on the number of people who bought tickets and participated, it seemed to be an important one for them as well!

I’m sure the con organizers were thrilled with the turnout! MegaCon once again was a four-day con, so everyone approached Thursday with some trepidation. It’s common for Saturday to be “the big day,” so the opening day can be great, good, or awful. For this year, it was good. For what is normally a work day, Thursday attracted a pretty nice crowd—people could walk around the spacious aisles easily, nearly all of the vendors were on hand and ready to interact, and it was a good day overall.

Friday was bigger than Thursday. As far as I could see, the vendors were all ready and waiting for the doors to open. The aisles were noticeably more crowded than the day before, and exhibitors and creators that I am acquainted with who where there seemed to do about twice as well that day. Then Saturday hit! Like Saturday at San Diego Comic Con, the aisles were packed with people attending nearly all of the day. It was a busy time on both sides of the tables, and once again people selling their wares I know said their income doubled from Friday. For an idea what it was like, see the image to the left.

Sunday was about equal to Friday, and that’s great because the attendance was strong, but not so crowded as Saturday, making it easier to navigate the floor.

The Artist Alley and exhibitor areas were big—really big—with lots of kinds of things being sold, from comics display cases to comics to show them off in. I thought there was plenty of room to move around—Saturday being the notable exception.

There were a lot of food vendors, and they represented a wide variety of kinds of meals to eat. I personally liked the pizza and the healthy food folks (variety, you know), and there were a lot of tables and chairs for folks to sit down and eat or take a load off for a while. And I enjoyed the Wild Bill soda places that let you buy deals to get their soda in a metal mug in ways that let you get refills. Yum!

The guests were good choices, very similar ones to the people I saw at Fan Expo Dallas. This makes sense since I believe the same organization runs both cons. You sign up Zachary Levi from Shazam at one, you get him for several of them. It works for both the talent and the organizers.

I found space to be great—well, except for Saturday, as I previously mentioned. Oh, and Artist Alley, the signing area, and the exhibitors all felt like they had more room this year.

The cosplayers were great as well. My favorite was someone dressed up like The Batman Who Laughs, who is turning into quite the popular character! Way to go, Scott Snyder!

There was a marching band that paraded through the Exhibitors area each day when the VIPs entered. Guess that was an extra benefit!

WHAT I WOULD DO DIFFERENTLY When exhibitors and creators have to tear down after a con, it’s always somewhat chaotic. It was no different at MegaCon. While many people utilized the loading docks when setting up shop, it appeared that most carted the goods they had left through the front door space. That had many of the vendors parked very close to the front door, forcing attendees to walk a lot farther. My suggestion is to organize a parking area for vendors away from the entry doors.

In fact, walking was something you did a lot of during MegaCon. I referred to it as the “MegaCon exercise program.” You walked into the building, walked to get the bags you came in with inspected, then walked through another area to even get to the floor. Then you had to walk around the floor to see vendors and stars and all. I guess you get this with the good news of more space, but I wish they could compact some of the entryway areas to save some steps. It must have been tough for those with walking troubles to get around.

The biggest concern I had on the floor was that it was terribly difficult to find booths there. In Artist Alley, there were no signs indicating which row it was, so when I was searching for a particular booth, I had to keep asking people, “What’s your booth number?” until I finally narrowed it down and found it. This was also true in the Exhibitor area, and the same thing happened when I went looking for a specific vendor. I simply couldn’t find them unless I walked around an area, widening my search pattern each time. The good news for Exhibitors was that there were banners indicator Aisle Numbers above them. However, once you found the Aisle, you were on your own.

What about the maps? Well, the ones provided by MegaCon were printed pretty small on a brochure. Much of the weekend was spent helping people completely lost by trying hard to find booths (many of them with numbering patterns I couldn’t decipher) get to where they wanted to go. In fact, when I was helping at the Stabbity Bunny booth, I often had to walk people from there to other booths to creators associated with the book so they could find them. Clearer identification of the booths might help in the future!

I don’t want my suggestions to make you feel badly about MegaCon—to the contrary, I came away elated since my own experience was a strong one on so many levels, including helping at one creator’s booth to meeting new comics creators to finding the stuff I wanted!

It was the best MegaCon I had attended! Yes, the floor plan and areas were different and things were somewhat difficult to find, but you could do it! Granted, not everyone had the experience I did, but I think there was a lot of good happening there!

Someday some brilliant con organizer is going to make a convention that runs across two weekends and the days in-between! Maybe it will be MegaCon!

I want to again be there next year, so thanks to the folks who approved my press pass! I’ll be talking with you again in 2020!

What do you think? Do you have better ideas for solutions to problems bigger cons encounter? What can conventions like MegaCon do to help fans and vendors alike? Whatever your opinions, please be sure to share them in the space below!