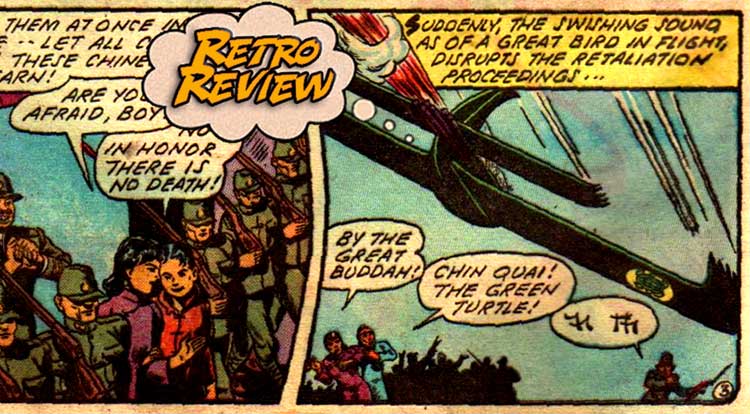 Smack in the midst of WWII, a most unusual hero showed his face…  sort of.  Your Major Spoilers (Retro) Review of Blazing Comics #1 awaits! Previously in Blazing Comics:  I’ve seen Rural Home Publishing referred to as “one of the smallest” comic publishing concerns of the Golden Age, but that’s not strictly true:  Technically, RHP was SEVERAL of the smallest all banned together.  Croydon Publisghin, Enwil Publishing and this issue’s packager, Rewl Publications, all bought material from various creators and published them under the somewhat centralized “Rural Home” banner.  Since they didn’t actually create the material, their books feature vast fluctuations in quality and technique, as well as variations in tone and influence.  This is how they managed to give us the first Asian superhero in comics history, at least in the most technical sense.

Please be warned: This story features slurs aimed at people of Japanese ancestry, as well as stereotypically racist illustrations. The very first story page of this issue features our hero, with his cool cape sigil, in full-on action in a traditional splash page, but anyone with comics experience will realize how weird it is that he’s facing away from the reader!  Chu Hing (who used Chinese naming conventions, meaning his individual name is Hing, family name Chu) also inserted Chinese characters into the margins of this splash page, which I’ve always found to be a fascinating clue about his intentions for the Green Turtle.  Our story opens in a small town in China, currently under attack by Japanese forces.  All the traditional horrific racist depictions of Japanese characters in Golden Age comics are in full force here, as the brutal invaders prepare to execute a woman who dared to defy them.  Enter The Green Turtle! Once again, our hero keeps his face unseen, as Chu uses long shots and keeps the hero facing away from the reader while in action.  His intention to have the character be Chinese or Chinese-American is undermined by the (unnamed) colorist, who makes sure to give him very pink skin in contrast to the darker tones given to Chinese and Japanese characters  throughout the book.  Like so many Golden Agers, a lot of GT’s powers are in his gear, specifically The Turtle Plane, which resembles a P-40 Warhawk.  Sweeping in to save the young woman, Green Turtle also meets the boy who would become his sidekick! If you were reading this story, you might miss how overtly the hero’s face is hidden, but once it’s pointed out, it’s imposisble to miss Chu’s intentions.  In addition to a lot of back shots (which do show off how strongly designed The Green Turtles costume is), extensive shadows and even characters stepping in front of him obscure our hero’s face throughout the issue, but the most fascinating part is the occasional appearance of the character’s shadow as a shadow-turtle with a sly and cartoonish expression. Green Turtle and the newly-minted Burma Boy fight off the Japanese soldiers using the super-power of “murder”, then set out to recover the gold stolen from the Chinese town.  Using his powerful plane, the still-obscured mystery man takes on the armed soldiers with only his fists and chutzpah. With a grand total of five appearances to his name, I can only find one place where The Green Turtles face is NOT obscured, that being the cover of Blazing Comics #2, which doesn’t seem to be Chu Hing’s work, making a strong case that The Green Turtle is (with an asterisk) the first Asian hero in fiction.  Blazing Comics #1 also features the first appearances of the pirate hero Black Buccaneer, magician Mr. Ree, very offensive jungle hero Jun-Gal and aeronautical hero Red Hawk, all of whom come and go in the five issues of this book, but it’s really The Green Turtle who is the star of the show, with strong art and some remarkably subtle coloring for the age, earning 3.5 out of 5 stars overall. It’s  a fascinating debut for a really interesting hero, one whose origins are as interesting as the art.

Rural Home Comics are a mixed bag, but this lead story is both beautiful and inventive, and the story behind Chu Hing's turtle hero is worth the price of admission (at grades lower than Near-Mint, anyway.)