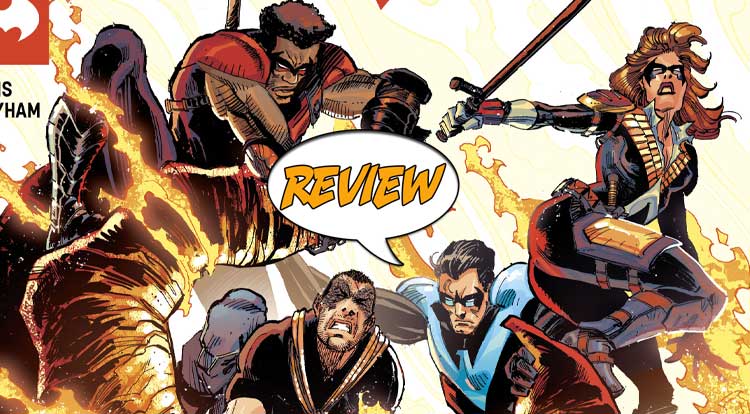 One Nightwing was good… FIVE Nightwings are better!  Your Major Spoilers review of Nightwing #60 awaits! Previously in Nightwing: Detective Alphonse Sapienza may be a natural-born leader, forged through his many years with the GCPD, but does that give him what it takes to lead the Night-wings when their lives are endangered as never before?  As fires that seem to have a mind of their own rage through Blüdhaven targeting cops, the team is up against its greatest test yet. Joined by Ric Grayson, how will the Nightwings save the city’s finest from a red-hot vendetta and the city’s newest villain, Burnback?

AT LEAST WE GET THE OLD SUITS BACK

We open with Detective Alphonse Sapienza leaping into action as Nightwing Prime, taking his skills to the street to fight a strange creature of living flame.  Alongside him is Nightwing Red, Malcolm Hutch, a firefighter who apparently carries an axe as his primary weapon.  That doesn’t seem safe at all, by the way. They battle the creature to a standstill, thanks to a mysterious cabdriver (“Ric” Grayson, the original Nightwing) and a little bit of luck, after which they start putting together clues about the creatures origins and motives.  Ric sneaks back to his cab to be confronted by his new girlfriend Bea, while Detective Sap recaps the origins of his thrist for justice.  Two more Nightwings, Zak and Colleen seek out a young woman with a connection to the mysterious Burnback, only to have the fire-being show up and try to sizzle their sausage, leading to a last page reveal that young woman, the daughter of Sap’s dead partner, is being sought by the creature not to flambe, but as his partner?

I had heard about the traumatic brain injury that caused Ric Grayson to lose part of his memories and personality, but hadn’t been checking in on the book recently.  The concept of assembling a team of Nightwings to protect Bludhaven is a good one, and I like the visual of the new recruits wearing variations of Grayson’s previous costumes, but this issue was a mish-mash of things that didn’t quite work.  We start with an explanation that Sap is “thirty-eight, maybe FORTY” with a long explanation of how he should be retiring by now which bothers me, followed by Ric’s monologue about how he still has enough skills to be an effective crimefighter, followed by a super-melodramatic flashback sequence from Sap.  It’s just too much exposition and dialogue, and even the big fire and the fight sequences are wall-to-wall text and awkward dialogue.  Mooneyham’s art is very dark and very noodly (a shot of Ric’s beard is a terrifying nest of crosshatch, with a wild-eyed expression to cap it all off) but the dark and murky coloring doesnt’ help.

All in all, Nightwing #60 is a bit of a disappointment, with a difficult-to-follow story full of people explaining things at length, with a couple of good action sequences that are damaged by flaws in art and unsuccessful coloring, earning 2 out of 5 stars overall.  There is a lot of potential in the Nightwings concept, but this issue isn’t the showcase that it needs and the whole ‘traumatic brain injury as motivation’ plot line is more than a little bit difficult to accept.

It's a really wordy, really awkward issue full of exposition and flashback that even a promising open and a cliffhanger that has some potential can't overcome.