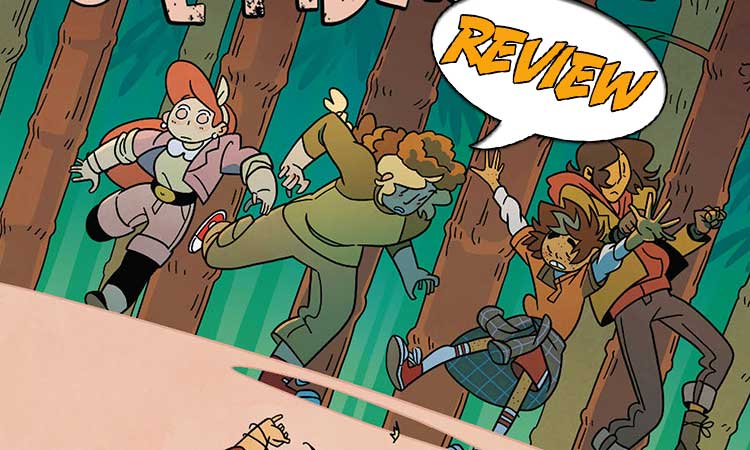 I’m glad I checked in on Lumberjanes #62, where the writing is solid and the friendship dependable.

Mal has slipped through a portal into the Land of Lost Things – you know, where the dinosaurs are! Can the Roanokes figure out how to get to her in time? Find out in Lumberjanes #62. Previously in Lumberjanes: April’s search for new and challenging athletic opponents leads her and her friends into the woods and toward terrifying creatures (that they flee from). This fascinates Ripley, but it hits Mal differently. Despite her tough exterior, she has some genuine fears she’s trying to deal with. Mal asks Ripley for her advice or help, in secret, and Ripley does her best. She goes for the Ripley version of exposure therapy, leading Mal back to the place where they last found the terrifying creatures. When next we see Ripley, she’s trying to get the attention of the rest of the Roanokes. On their walk, Mal vanished, slipping through a portal to the Land of Lost Things!

Lumberjanes #62 is another wacky but really interesting chapter in the apparently nonstop adventures of Roanoke cabin. This book has been solid from the beginning, and here it is, still coming up with fun and thoughtful stories. It opens with April, Jo, Ripley, and Molly at the Bearwoman’s cabin, knocking on her door and asking for her help. She is not at home, and while the others debate the merits of breaking in, Ripley climbs in through the window. At least there is some discussion of how right or wrong this is. The Bearwoman isn’t there, but they’re looking for her telescope, which can be used to spot portals. Ripley finds a frog statue that somehow reminds her of Mal, and the telescope, and off they go back to camp, but not without leaving a polite note.

Searching the camp for portals doesn’t reveal any. But then someone runs by, saying Dyatlov cabin caught a dinosaur near the Arts and Crafts Barn! Well, yes and no. They caught a turkey. But one of the other scouts has seen something odd in the area.

That’s an area of the woods where it’s snowing (in the middle of summer). Molly spies the portal – up at treetop level. Lumberjanes are nothing if not intrepid, and they climb their way up and through into a strange land where it is winter. The dialogue, always snappy, really kicks it up here. First there’s Aprils discussion of what she packed, and let’s just say that she’s prepared for practically anything. Then there’s the discussion of all the ancient artifacts they see – including a rotary dial phone, which I found terribly amusing. They also find some clues left by Mal.

Mal is still alive and hanging in there. We see a smidgeon of her journal as she bravely records her moments. And then she hears them. She runs out and runs into Molly. She screams. Molly screams. The Roanokes share a group hug and all scream. It’s adorable. Mal has been here for days and wants to leave. April and Ripley want to see dinosaurs. Mal begs to go back home so she can take a shower. It’s all totally on character. But before they can go, April and Ripley may get their wish anyway.

The art in Lumberjanes #62 is loose and stylized, but these characters are so familiar and have such distinct appearances that we get who they are. Their faces are simple, but that doesn’t mean they aren’t expressive. But what really drew my eye was the fun in the backgrounds. The Bearwoman’s cabin is, as we would expect, cluttered with all sorts of interesting things. We start out seeing food supplies, a book, some bottles, an axe, nothing too unusual. Then we see the skull and the carnivorous plant. Then there are the maps and a bulletin board that looks like it came from a police incident room. It looks random at first, but it could also be telling us a little more about the Bearwoman.

But really, everything radiates a mix of joy and excitement. I am amused by the searching-for-portals montage. And the climbing-up-to-the-portal scene. And again, I was really absorbed by the Land of Lost Things in the snow. It’s a fascinating place, a little reminiscent of Narnia in the snow, but not exactly.

I’m glad I checked in on Lumberjanes #62, where the writing is solid and the friendship dependable. I don’t see how they can keep coming up with fresh, new adventures, but they do. And not only that, there is a steady progression of character development for all the characters in turn which is just delightful to read.