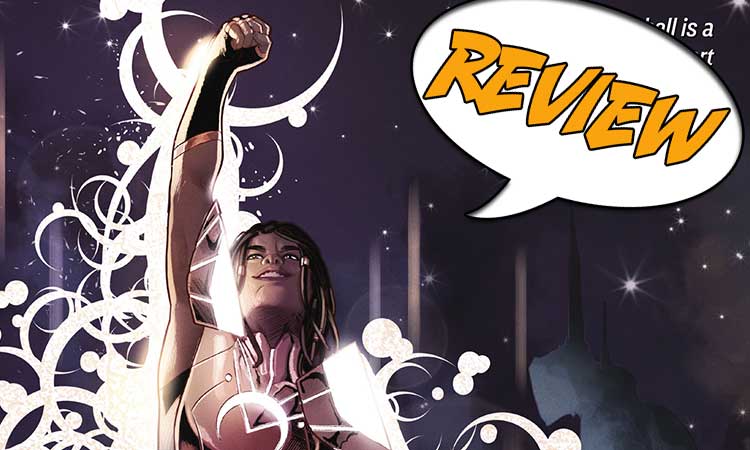 Naomi finally discovers the secret of who she is, and her life suddenly becomes a lot more complicated. Check out our review of Naomi #5 from DC Comics. Previously in Naomi: She has long dreamed that she was someone special, like Superman. After her investigating and talking to Dee, in town, her parents catch up to her and are forced to tell her the truth – her dad is an alien. He was sent to Earth to spy on a Thanagarian terrorist soldier – Dee – and found him just living in town and being a mechanic. Then he met Naomi’s mother, fell in love, and sent a message home that he was abandoning his mission. He never heard back. Then, one night, his interstellar energy alert goes off. Following this, he finds that Dee’s has also. A group of warriors, from neither of their peoples, shows up trying to kill a baby – Naomi. So she, too, is an alien!

Naomi #5 is an interesting story with an engaging main character. That said, this is the issue that crystalizes her background and explains what’s going on, and it is so complicated that it takes a lot of dialogue to get through it all. It’s interesting, and I like following Naomi through this experience, but to me the pace drags a bit.

Naomi has just been hit with a lot, and we’re about to find out just how much, and she seeks out her friend Annabelle. It’s the middle of the night, but Naomi wants to talk. Anna promises to believe her, and Naomi opens with dropping the bomb that Dee is an alien. Anna is briefly stunned, then rolls with it, and asks if he’s her dad. Naomi has to go through explaining that her dad is an alien too, and she is a different alien. To top it off, Naomi demonstrates how she can transform, at least into a different outfit. (And Annabelle promptly questions her shoulder pads, which is a down-to-earth touch that helps anchor all of this.)

When Naomi was sitting in the space vehicle, her parents handed her the garment she was swaddled in. Her body absorbed it and she heard a long telepathic message from her mother. She talks about other Earths, and how there was a crisis on theirs; the ozone layer was destroyed; they were bathed in other kinds of radiations, and a small number of people gained incredible superpowers. There were disagreements, battles, etc., but long story short, the worst of the bunch was a mass murderer (Zumbado) who happened to get superpowers and has been wreaking destruction.

Where Naomi fits in is that she is the only child who has ever been born to superpowered people from that Earth, and Zumbado is after her.

That’s a lot for Naomi to take in, and I like that she has a friend she feels she can confide in. I understand not wanting to talk to her parents after they dropped this on her. They talk a little more and Naomi reverts to her normal self and clothes. And then Zumbado shows up.

The art in Naomi #5 is simply fabulous. I rather like the look of the characters with a bold outline and coloring that resembles watercolor. But truly it is the expressions in people’s faces and bodies that sells the story. Naomi is going through a lot and sharing it with Annabelle, and we see that whole range. When Naomi transforms, there is a lot of light and swirly stuff involved and it looks great.

The backstory is related at length over a serious of double splash pages which are consistently lovely, trying to pick key moments from the tale to show them to us. There’s just so tremendously much to cover, and the art does a valiant job in trying to keep it all straight.

Naomi #5 has gone from being a simple-seeming mystery to being a huge, dramatic story with a heck of a lot going on in it. As such, while this issue is interesting and has some nice character moments in it, those are almost overwhelmed by the titanic job of catching us up on everything that happened to get us here. It’s big, it’s dramatic – but it feels almost too huge for me.

After years of wishing she could be someone special, Naomi finds out that she is – and trouble is hot on her heels!