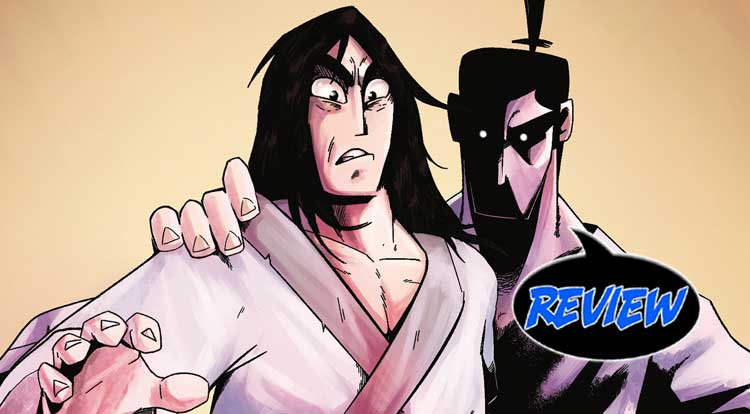 What happens to your identity when another usurps it? Your Major Spoilers review of Samurai Jack: Lost Worlds #1 awaits! Previously in Samurai Jack: Lost Worlds: Under the leadership of the benevolent Samurai Jack, society has prospered-everything is in line with his philosophies, his storied stoicism, and of course his hair. Of course, this is all news to Jack who doesn’t much care for this impostor using his name. But which one is the real Samurai Jack?

We open in a small settlement, where everyone (man, beast, robot or what-have-you) is dressed in the robes similar to those worn by Samurai Jack. Their simple lives are interrupted with the real Samurai Jack arrives among them, explaining that he has finally returned to help teach and guide them to the ways of true samurai. That scene is overseen from a cave in a nearby mountain by yet another real Samurai Jack, one whose wild hair and easily roused anger prove that he may have lost his way. (There’s no real identifier of when this takes place, but I suspect that it’s in the missing years between the original and the revived cartoon series.) Stalking down from the mountain, Jack confronts Jack, finding that, whichever of them is real, they’re evenly matched in combat. Their battle leads to the drawing of swords, and a fatal blow!

And that’s when things start to get a little weird…

This issue is written so that it could fit pretty much anywhere in the Samurai Jack canon, and the idea of an entire society basing itself on his good example is a strong one. Having the wild-eyed Jack arrive and so clearly seem like the false samurai is also solid, leading to some interesting ruminations about identity and how you define who you are. As the issue ends, Samurai Jack returns to the city to help them not only follow HIS ways, but to forge their own traditions and beliefs… but there’s more to that than it seems, and the final page is less a cliffhanger than it is a zen koan. I’m impressed with how well Thomas’ art merges the clean lines of the animated series with a more traditional comic style, and the amount of expression that he can get from the relatively simple face of our hero is impressive. Best of all, depending on your approach to the story, the truth of who is real and who is artificial is always up in the air until the very end.

All in all, this one-shot is a worthy successor to the Samurai Jack we know and love and has some interesting things to say about our hero and the question of identity. Samurai Jack: Lost Worlds #1 makes for a fun story that’s not really a mystery, but still has unexpected twists, tells us more about our hero and does it all with well-done art, earning 3.5 out of 5 stars overall. I would have liked to have had a little more grounding of the story in Jack’s world (perhaps the traditional opening?) and it feels like it reads very quickly, but all in all, it’s a good read.

A good standalone that balances a little philosophy and some clever plotting to good effect.