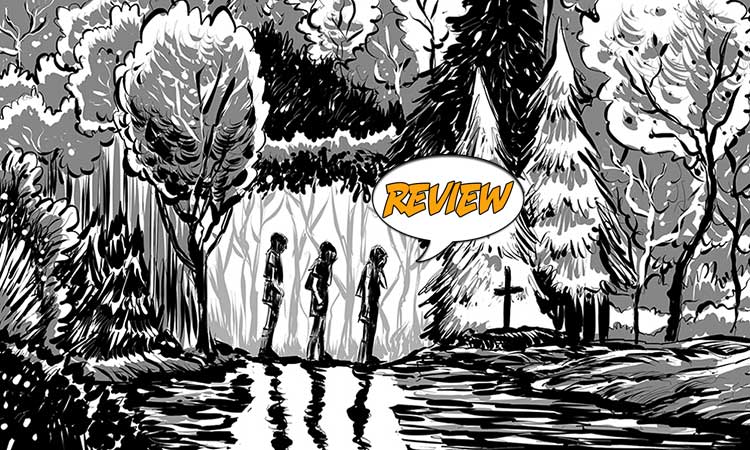 Strapped to gurneys and threatened with memory erasure, can the surviving members of the Black Badge team escape and make those who betrayed them pay?  Find out in our Major Spoilers review of Black Badge #10! Previously in Black Badge:  Who doesn’t love a Scout?  Indeed, who notices a Scout these days?  All that dib dib dib and talk of woggles is so passé.  After missions into Afghanistan and the death of Willy, one of their team members, the survivors try to uncover what is going on.  Now, faced with brainwashing and a mind wipe, Kenny, Mitz and Cliff face a terrible choice.  Join with those who have corrupted the Black Badge organization, or fight back!

Bottom Line:  Leave it to these kids to save the world, and themselves!

Black Badge #10 picks up right where the previous issue left us, with the surviving members of the team strapped to gurneys, facing the prospect of a brainwash and memory wipe if they fail to answer a series of questions from a menacing AI.  After all their adventures together, and the death of one of their own, Willy, it seems the team is being sacrificed.

The twists and turns in Black Badge #10 pile higher and higher.  In earlier issues, it was all about the team getting into and out of a series of escalating scrapes across the globe.  The idea of a team of skilled children masquerading as scouts is preposterous, but under Matt Kindt’s skillful direction, the idea is made to seem reasonable.

Thanks to a series of flashbacks to the 1980s, where an earlier team faced a similar series of tests, Black Badge #10 delves deeper into the true nature of the Black Badge organization.  Those children who ‘graduate’ from field duties become handlers and trainers.  Some of those who graduated in the 1980s elected to turn the Black Badge into an organization designed to rule the world from behind the curtain.  Now, the surviving trio, Kenny, Mitz and Cliff have a chance to make things right.

The fun of Black Badge #10 is in the revelations – what we thought was a Boy’s Own romp in the earlier issues becomes something much more dark and mysterious now that we see some of the guiding hand behind the Black Badge organization.  I know some grow weary of the darker edge to storytelling we now have and would prefer adventure for adventure’s sake, but there’s something appealing about how Kindt makes all these issues have resonance and a sense of heft to them.  Sure, adventure is fun, but it can feel empty after a while.  Here, with Black Badge #10, we see the curtain ripped away to reveal a darker hand at play.

TELL US A STORY

Kindt brings his trademark sparse writing style.  The characters of the trio aren’t any more fleshed out than before.  There is no ‘home life’ on display.  Which means the storyline is propelled along on rails, with no time to stop and take stock before we’re taken to the next stage of the plot.  It means the reader isn’t given a chance to stop and wonder at the plausibility of the concept, which, if you think about it for more than three seconds, would fall apart like a wet tissue.

Working in harness with Kindt, we have Tyler Jenkin’s on art duties.  If anything, his line work is even sketchier than before, and I love him for it.  His artwork brings a distinctive character to the story.  The world of the secret agent has frequently been compared to a hall of mirrors, where nothing is as it seems, and with his artwork, Jenkins brings the same sensation to Black Badge #10.

Time will tell if Kindt sticks the landing.  The odds against our heroes pile higher and higher the closer to the end we get.  Indeed, it seems, based on the final page, the odds are insurmountable.  But I’m sure, as with the real scouts, our trio have adopted the motto of Be Prepared.  In that spirit, we should all be prepared for a classic finish to an excellent run of issues.

Black Badge #10 is an entertaining, enthralling slice of pulp fun.  The writing and the artwork mesh perfectly to propel the reader non-stop to a breathtaking conclusion.  Married with the action is an intriguing tale of good intentions gone awry, as the adults, once again, have messed everything up for the next generation.

7.3 The Kids Are Alright

Super skilled teen agents against a cohort of corrupted adults. I think I know who’ll win. But not before an ocean of blood is spilled to wash the sins away…