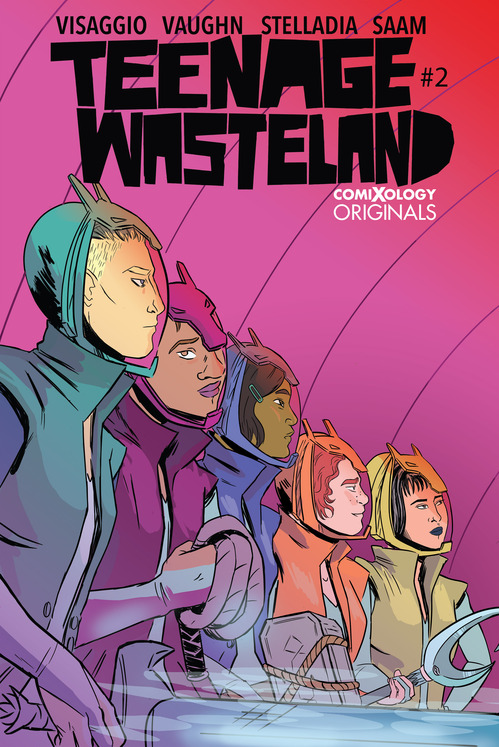 May 15th marks the return of Magdelene Visaggio & Jen Vaughn’s punk rock, magical grrrl comiXology Originals series, Teenage Wasteland  the action-packed comic where after-school activities include transforming into galactic heroes and fighting monsters. The all-new issue #2 is available to read now digitally for members of Prime Reading, Kindle Unlimited, and comiXology Unlimited, and for sale on comiXology and Kindle.

“Teenage Wasteland is working with a lot of elements that fantasy and superhero fans love: the boredom of high school mixed with the high adventure of monster slaying, the idea of becoming a hero when your teachers think you’re nothing, and much more,” says SYFY Wire.

Smart-mouthed Ellie Tweed is the jerkhole new girl in school who falls in with the wrong crowd, who happen to have an explosive secret: they aren’t just teenage girls with attitude, they are the Earth’s secret defenders! And Ellie is their newest recruit.

“I grew up watching Power Rangers and other toku imports, and when you’re a kid, that stuff is a power fantasy,” says Magdalene Visaggio. “You get all these cool abilities and weapons and robots and fight evil. Who wouldn’t want that? But the older I got, the more I started to see it differently: it’s the weaponization of teenagers. And then you start seeing it everywhere, right up to classics like X-Men. So that seemed like a unique jumping-off point. How can you ever trust Zordon? What does it mean to make children fight your war for you? So that’s the heart of it for me: questioning the premise of stuff like MMPR and looking at the way conflict defines people — and shatters them.”

“Mags’ writing digs under your skin, she taps into the loneliness and hormone-fueled anxiety teens feel,” says Jen Vaughn. “Most teens want to be noticed, to belong, to be special, to be a chosen one. What’s worse than being normal? Being an expendable in a long line of chosen ones.”

About the Teenage Wasteland Creative Team:
Magdalene Visaggio is the Eisner and GLAAD Media Award-nominated writer behind Kim & Kim, Eternity Girl, Dazzler: X Song, Transformers vs Visionaries, and Quantum Teens Are Go. In addition to her comics work, she’s blogged a bunch (now rightfully deleted) and is an occasional contributor at Paste Magazine, focusing on comics and culture.

Jen Vaughn is the cartoonist behind the writing of Goosebumps: Download and Die drawing Betty and Veronica’s Vixens, as well as drawing covers for the comic series My Little Pony, Pathfinder, The Wilds,
Hack/Slash vs Vampirella and more. She also plays a tiefling ranger, Riot Bonezerker, in the popular D&D podcast, d20 Dames.