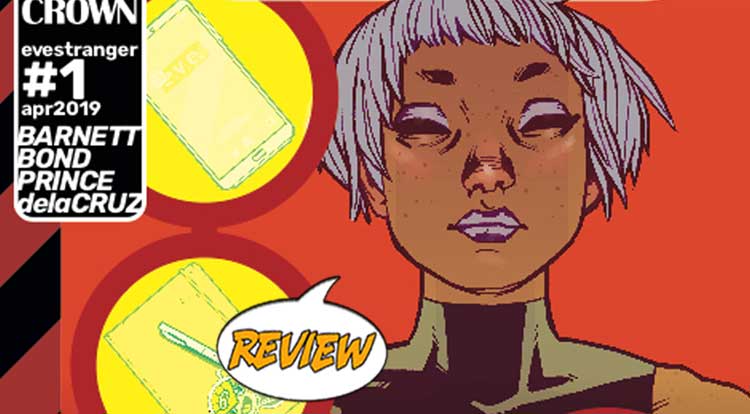 What happens when a good guy gets a sneaking suspicion that she’s actually working for the bad guys? Your Major Spoilers review of Eve Stranger #1 awaits! Previously in Eve Stranger: You have unlimited funds, a jet-set lifestyle, and extraordinary abilities. And your bloodstream is filled with nano bombs. The contents of a syringe will deactivate them for a week and also wipe your memory. So what happens when you develop a sneaking suspicion that you’re actually working for the bad guys?

The opening sequence of this issue is a point-of-view presentation of Eve waking up and seeing her father, who promises her a special surprise for her birthday. There’s some gratuitous Icelandic sprinkled into the dialogue, followed immediate by Eve waking up, for real this time, in a mostly wrecked hotel room, with a strange package and a gun on her bed. She finds a note that she wrote the night before, warning her that she won’t remember anything that has gone before, but that she now has a mission, with the details in the sealed package. Oh, and that she never orders room service, so the man behind her doesn’t have eggs benedict but, in fact, is trying to kill her. Calling the police goes poorly (all evidence of her attacker and their scuffle has been erased by the time she arrives back at the room), visiting the hospital is equally bad (her blood smashes its way out of the testing tube), but at least her credit card has no limit. Buying a new (ridiculously expensive) motorcycle, she sets off on her new mission, in the hopes of finding out who she actually is and why she keeps having random memories of her father…

I AM LOVING THIS ART

The presentation of this issue is really impressive to me. The color palette used is muted compared to many modern comics, but not limited, giving a really good impression of “real” world light and color. Philip Bond’s art (which I’ve been in love with since ‘Kill Your Boyfriend’ twenty-odd years ago) is still incredibly detailed and full of life and emotion. Eve’s subtle expression of excitement at finding out her credit card is unlimited is perfect, and the quick fight sequence is exciting while making it clear that we’re dealing with a world that has gravity, momentum and consequences, something you don’t always get in comics. Most of this issue’s story is devoted to world-building and emphasis on the mystery at the center of Eve Stranger’s life, with tantalizing glimpses of the people who send her out, the process to hire her services and a mysterious man following her who may be her lover or her handler. It’s all unclear, but in a way that makes me want to unravel the secrets of this young woman and exactly how and why she does what she does. Add in a cute backup story with kid Eve as an investigative reporter that may not be what it seems, and you’ve got a really good opening shot.

I had not really been paying attention to the Black Crown titles before this issue, but I may have to go back and give things like ‘Punks Not Dead’ a look, as Eve Stranger #1 really nails the first issue criteria for me, introducing an interesting mystery, a protagonist that I want to know more about and some really lovely art, earning 4.5 out of 5 stars overall. If nothing else, it’s a chance to see Philip Bond drawing action, adventure and exotic locations, which is in itself a win.

A really effective first issue, which makes me want more of this series.