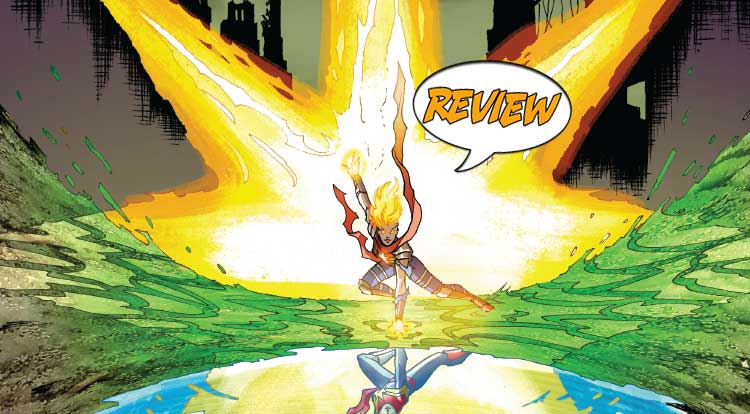 Captain Marvel’s essence has been absorbed by Rogue!  All seems lost…  Your Major Spoilers review of Captain Marvel #5 awaits! Previously in Captain Marvel: The battle with Nuclear Man comes to a head!  Captain Marvel’s rebellion forces have launched their final desperate assault for control of the island.  But Nuclear Man has an ace in the hole – and stopping him will take everything Carol’s got.  The life of every man, woman and child on Roosevelt Island rests on Carol’s shoulders!

After weeks and weeks trapped in Nuclear Man’s time-locked bubble, she finally confronted his secret weapon: former X-Man and one-time absorber of her power and personality, Rogue!  As last issue ended, it seemed that he had one, but this issue begins with Rogue turning on him and attacking with Carol’s powers!  Rogue’s strength turns the tide, and Nuclear Man is temporarily slowed down long enough for her to regroup with her fellow heroes, where she gets bad news from Echo.  It seems that the bomb they’ve been worried about is actually Som, the young man that they saved from Nukeman’s compound, and their own powers have been charging his newfound explosivity.  That’s totally a word, by the way.  In a fit of irony, the villain’s decision to bring in Rogue leads to his downfall, as Rogue’s power-absorbing abilities keep Som from detonating and destroying the entirety of Roosevelt Island.  Draining that power also brings down the shield around the island, allowing Captain Marvel and company to beat the hell out of the artist formerly known as Mahkizmo.

I have to admit, I really enjoyed the interaction between Captain Marvel and the other heroes in this issue, especially She-Hulk and Hazmat bonding over how they both do and don’t miss their uncontrollable powers.  The resolution of this story still leaves open the possibility of additional conflict with Nuclear Man, as well as the fate of Som (Son Of Mahkizmo, by the by), but it does offer some amazing closure for the ongoing issues between Captain Marvel and Rogue.  Not only do they work together to resolve the crisis, they admit that, while they’ll never really be friends, they have a great respect and understanding for one another.  Carol also has a wonderfully impressive moment where she channels her full powers, Binary style, reminding me of just how powerful she is.  Carmen Carnero really delivers on the art side this issue, with stylish battle sequences that don’t overshadow the emotional drama of the characters, with the most satisfying shot of the issue being the handshake between Carol and Rogue.

All in all, this is a really well-done ending to the first arc of this book, one that adds depth not only to Captain Marvel but to the entire cast, wrapping it all up really well with a story that delivers both on the emotional and the fighty-fighty levels.  Captain Marvel #5 is a good final chapter to this story and one of my favorite Rogue stories in years, with some good-looking art and a well-done story combining for 4 out of 5 stars overall.  If you haven’t been reading Captain Marvel, this might be a decent time to get on-board!

A resolution of one of Carol's oldest rivalries, some really nice character work for some under-served Marvel heroes plus She-Hulk in action. What's not to love?