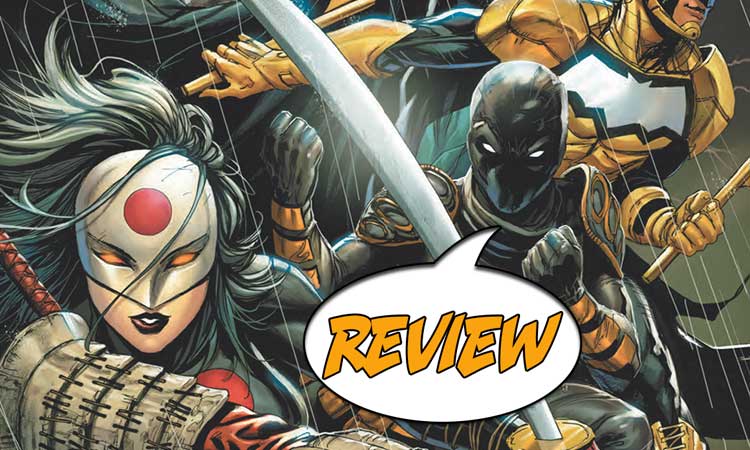 Batman and the Outsiders #1 Review

The Batman has entrusted Black Lighting with the leadership of a group of heroes in need and promised to let him make a team of them on his own. However, circumstances blow that promise out of the water and Batman calls them in to save the life of a young girl. BATMAN AND THE OUTSIDERS #1 is out on store shelves now. Previously in BATMAN AND THE OUTSIDERS: Originally, Batman formed the Outsiders because there were just some issues the Justice League refused to handle. With strong ties to Markovia, the original team contained all new heroes (Katana, Halo, Geo-Force, and Looker) and two heroes who had turned down membership in the Justice League (Black Lighting, Metamorpho). In universe, the team went through multiple incarnations, including having been led by Nightwing and Arsenal as a pro-active group that hunted villains. The original title is noted for the amazing creative team of Mike Barr and Jim Aparo.

On the roads above the skyline of Los Angeles, Gabriel Ramos and his daughter Sofia are driving in silence. The silence stems from the date; this was the day they lost Gabriel wife and Sofia’s mother. Gabriel is trying to reach out to his daughter, to let her know it is alright when without warning he slams on the breaks and screams for his daughter to hold on. Their car comes in direct contact with a large, costumed man who stands immobile against the momentum of the red car, shouldering it into the air. Gabriel’s last words are to his daughter, to run, as the man emits a green glow from his eyes and mouth that is mirrored in the dying eyes of the father. Unable to escape, the assailant grabs Sofi, but is surprised that his touch seems to have no effect. Telling her he will show her what she is, he tosses her off the overpass and directly into a tanker truck carrying flammable material. The explosion picks the truck up and engulfs it, as well as the young woman who is lying in the wreckage. Nevertheless, she is not dead, and with a scream, she stands and moves away from the carnage.

In Gotham City, the heroes known as Orphan and The Signal are hiding under cover, protected temporarily from the gunfire of a mania named Saint John, a church shooter. Black Lighting and his team are on the scene to take down the lunatic, and The Signal is moments away from leaving the plan and taking the killer on his own. Then Black Lighting strikes. As his partner, Katana, uses her soul sword to disarm the target, Black Lighting lights him up with a bolt from the blue. They took the enemy down, but not without problems. Signal was clearly about to go off script, and Black Lighting calls him on it. Angry and chaffing under Lightning’s orders, Signal verbally attacks the older hero, and then realizes he was in the wrong and apologizes. Katana asks Orphan if Signal is always like this, but Orphan says that Signal has changed since his injuries at the hands of the villain named Karma.

Later, in Kubrick Towers, Jefferson Pierce is meeting with Bruce Wayne. He is not happy with the fact The Batman has placed him in charge of this team of Outsiders, and lets Bruce know it. He feels that the Bat casts too large a shadow, and tells Wayne he feels it will end badly for the team. Bruce tells him to make the team his own, that he will not stand in the way. He confesses that the Batman just does not have what the team needs, he cannot have it. He expresses how much he trusts Jeff to do the job and how he knows he can. As a parting gesture, he lets Jeff know that the penthouse apartment is now in his name. Black Lighting has a home.

Later, the Batman uncovers the incident with Gabriel Ramos and his daughter. He has a connection to them, a connection that involved a promise. This will cause Batman to call in the Outsiders, and for a reluctant Jeff Pierce to make a decision about the future of the team. Moreover, what of young Sofia? She is on the run, but the appearance of a mystery man with a story of her being the answer to the future will change her decisions. Can Black Lighting and the team find her in time?

Bryan Hill (Postal, The Wild Storm: Michael Cray) has succeeded in something several other authors missed, making the Outsiders interesting again. The Outsiders is one of those titles that had a huge impact on many readers and creators back in the day, due to the excellent scripting of Mike Barr and the original art of Jim Aparo. It has come back several times, with and without the Batman pre-fix, to varying degrees of success. Here we have a team that is broken, and in those ways may be more on the outside than others. Black Lightning doubts his leadership abilities, Katana is dealing with the ghost of the past, Signal is possibly suffering from PTSD and Orphan is running from her past by living her future as fast as she can. The characters are interesting, and stand out from the regular ‘we have to make The Batman proud’ syndrome some other titles have fallen to. He is a solid writer and is weaving the initial threads of what may become a great story.

Artist Dexter Soy (Red Hood and the Outlaws, Mortal Kombat X) is delivering some great, solid, cinematic artwork. His action sequences are on point, and the quieter moments draw you in. Every page has eye candy that will make you smile. Hope he gets to stick around for a while.

Batman and the Outsiders #1 is a good start to what looks to be an intriguing story, but there are a few character choices that make me shake my head. They are little things, and do not detract from the overall story, but still I wonder what they were thinking. Regardless, this first issue is a good one. Let us see if it can continue.

BATMAN AND THE OUTSIDERS #1 delivers an intriguing story that deals with issues of responsibility and trust, while at the same time delivering great action and character development.

Batman and the Outsiders #1

A good story, diverse cast of characters, and enough sub-plot possibilities to wreck a Levitz Paradigm. Go pick up a copy today.