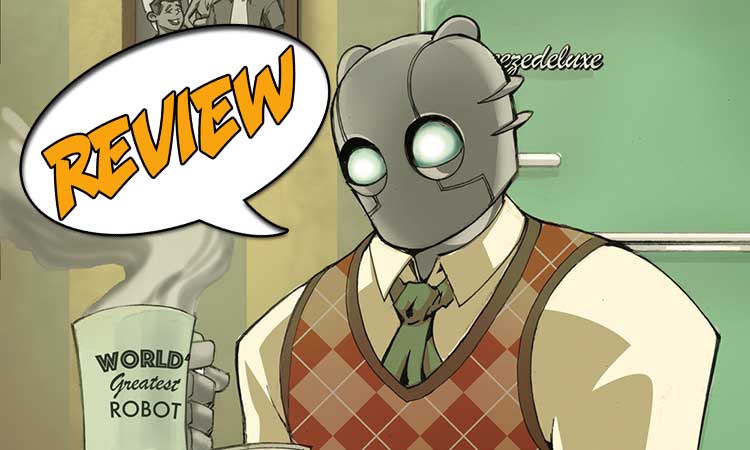 The Vampire Dimension is back! Bernard is getting enlightened. Alan’s secret is out and he probably won’t be trying to destroy the world again. All in a day’s work in Atomic Robo: Dawn of a New Era #5! Previously in Atomic Robo: While exploring the local lava tubes, Bernard becomes disoriented and finds, of all people, Princess Nequa of the Akni. Her people are dying and only Bernard can help them, after he learns to phasewalk, of course. Meanwhile, at Tesladyne, Robo assigns Jenkins to do the morning workout for the interns. This doesn’t quite kill them, but it does make them curious enough to go digging through his files. Lang stumbles upon Robo and Alan and asks the important question – what was he thinking? She calls an emergency staff meeting as the interns listen in to then, and Alan watches the interns.

Tesladyne is known for having smart people there, and as Atomic Robo: Dawn of a New Era #5 begins, the interns are having a discussion. Alan is going to be with them. How can they compete? Will they be competing? Is this the start of AI taking over the world? But in the end, all three have to admit they’re kind of excited to be right on the forefront of what happens next. Whatever it is.

I really like the thoughtful discussions about Alan. First, it’s the interns, but then Lang, Vik, and Foley get into one, and it doesn’t devolve immediately into bickering or a shouting match. Jenkins, who pops up out of the ductwork, is a bit more directly focused on watchful vigilance. Speaking of discussions, now that the cat is out of the bag, Robo has to talk to Alan. Not only does he have to explain why people are angry, but he has to explain what happened with the previous ALAN. And Alan needs to come to grips with his reaction.

In the lava tube, a jubilant Bernard declares that’s he is the phasewalker! He’s doing crystal psionic stuff, and plainly it’s pretty cool. But no, what he’s managed are things Akni babies can do. Nequa tells him to close his eyes and see through the crystals. With her coaching, he starts doing it. (This is bound to be interesting.)

Robo has a frank discussion with Lang. He tries to explain what he was doing, why he was keeping Alan a secret, and that he wanted to be sure about him. Lang is not afraid to stand up to him and point out, at the very least, how this looks to her and why she does not feel she can trust Robo any more. It’s terrific dialogue that makes some good points, but still has some humor in it, as when Lang compares raising a new Alan to see what happens with cloning up a baby Hitler to see what happens.

Robo’s life is never uncomplicated. No sooner does he leave Lang than Jenkins pops up, and I love this bit. He has a report full of recommendations and he wants to know Robo’s thoughts. Basically Robo thinks he’s suggested a lot of things that are impossible, to put it bluntly. (I’ve known people like this, although not quite to this degree.) Suffice it to say that they might involve keeping the world from blowing up by blowing up the world.

Alan meets the interns, and they get along pretty well, even to the point of playing a practical joke on him. Vik and Lang decide to leave without meeting Alan, not without considering it, but deciding that now they are going to get their vacation. Then Alan lands on the roof of their van. After having been on fire. Just a little.

Characters run a broad range of emotions in Atomic Robo: Dawn of a New Era #5. The style may be quite breezy, but the expressions catch what is going on in the dialogue and don’t just echo it – they reflect upon it, giving us an idea of what people are thinking in addition to what they are saying. For example, Lang is upset, and she ends up taking this out on those around her. But she’s also feeling kind of hurt by Robo’s keeping secrets. She can’t trust him, and she doesn’t like that she can’t trust him.

In contrast to her, which makes it all the more amusing, there’s Jenkins. He’s still operating in his own reality, intensely being prepared with all his contingency plans while being slightly clueless that not everyone else is as prepared as he is. I love when he waylays Robo – he has this great smirk. They have their discussion about his ridiculous plans, and you can just see that he doesn’t see that that is any particular problem with them. And the following day, there is a panel that captures Jenkins perfectly – he goes out for a sunrise jog wearing a mask and a fully laden pack.

BOTTOM LINE: SERIOUS DISCUSSIONS SLIP IN AMIDST THE LUNACY

I think Atomic Robo: Dawn of a New Era #5 is a terrific book. The adventures of Robo and crew are interesting; the personal interactions are very real and thoughtful, but also clever. I enjoy a book with a bunch of smart characters who are still very human, especially when some of them are robots.

The end of an arc is only the beginning of the further adventures of Atomic Robo!