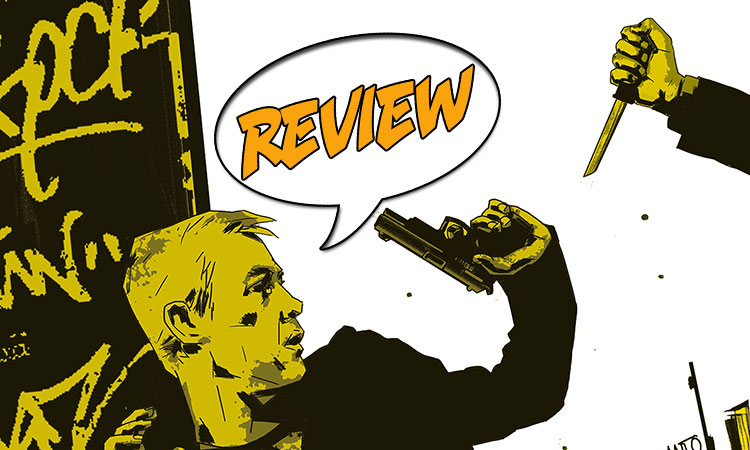 Immortal secret agent Pitor Wyrd is wheeled out to deal with the theft of a piece of hi-tech from DARPA.  However, he bites off more than he can chew when a figure from his past emerges, challenging everything he knows.  Can Wyrd face this latest threat and his own demons?  Find out in our Major Spoilers review of Wyrd #3! Previously in Wyrd: the seemingly immortal secret agent Pitor Wyrd deals with the uncanny, the unusual and the unbelievable.  After sorting out a prime minister with a porcine bent and a love of the occult, Wyrd faces an offer he can’t refuse.

When I last reviewed Wyrd, I was taken by the art but less so by the derivative storytelling.  The main character felt too much like an affectionate nod to Hellblazer and not enough of his own thing.  I’m happy to report that Wyrd #3 is a definite improvement on the writing side, while the art is some of the best in the business at the moment.

The addition of a figure from Wyrd’s past is the reason why things have begun to click.  Wyrd has been a blank slate so far; Wyrd #3 begins to fill in the gaps.  This character opens the issue as Wyrd has done in previous issues – dropping parachute-less from a plane, though this time it is onto another plane, where the theft of equipment from DARPA is brutally affected.

COMING INTO ITS OWN

Wyrd #3  takes its premise and doubles down – gone is the cute nods to other material, replaced with a willingness to embrace the concept.  The theft of the armor mid-flight from the DARPA flight allows this nameless agent to overcome Wyrd later in the issue.  The way Wyrd is lured into the trap – the death of dozens of civilians, and a brutal message sent via the sole (though not for long) survivor’s smartphone, shows Curt Pires ramping up the stakes.

The writing in Wyrd #3 shows the most improvement from the previous issue.  Amidst the carnage, Pires crafts a really human moment in a scene that ostensibly depicts a couple breaking up outside a café, before we realize the full horror of their situation.  It was this approach, of coming from one direction while hitting you from your blindside, that has real impact.

The development of Wyrd’s character is the hallmark of Wyrd #3.  In the absence of knowing who he is, Wyrd’s downtime is spent on women, booze and drugs.  He has no memory of who he really is, and how he came to be.  As his kidnapper states, ‘they really did a number’ on him.  It’s at this point in the story that the reader is treated to a number of flashbacks that likely point to Wyrd’s creation – it’s done with a lightness of touch and spare writing that you wonder at the ham-fisted effort the previous issue.

The ending as crafted by Pires is a double whammy of good intentions gone awry and a man who, faced with the knowledge of what he is and how he has been duped, refuses to deal with it at all.

For all the great work that Pires has done with the Pitor Wyrd and the writing in general in Wyrd #3, it is Antonio Fuso’s artwork that really shines in this issue.  I’m not usually a big fan of photo-realism in comics – I still remember with horror a story that featured in a Doctor Who Magazine comic that was entirely filled with characters whose look was derived from photos – but Fuso balances that with some excellent artwork. The layout of the panels immeasurably helps push the story along.  His line work is clean and expressive and there’s a brutal dynamism to all the pages that give the series such a distinctive look.  Of special note is the scene where Wyrd is pulled into another dimension – the sense of otherworldliness is remarkable.

I’m really happy to report that Wyrd #3 is a must buy.  Really, this feels like a reboot, as the first couple of issues aren’t necessary to understand the character or the world around him.  The Hellblazer comparison is beginning to fade, as Wyrd embarks on his journey to being a fully realized character.  This issue is full of moment, of arresting images that linger long in the memory and feels like a launching pad for something far greater than its humble beginnings.

7.7 Pitor Wyrd is the demon offspring of James Bond and Hellblazer – only worse!

Above all fun, Wyrd #3 also allows us to see behind the curtain of Wyrd’s character. The sense of something bigger going on is overwhelming, and sets the rest of the series up for further revelations, and huge moments!