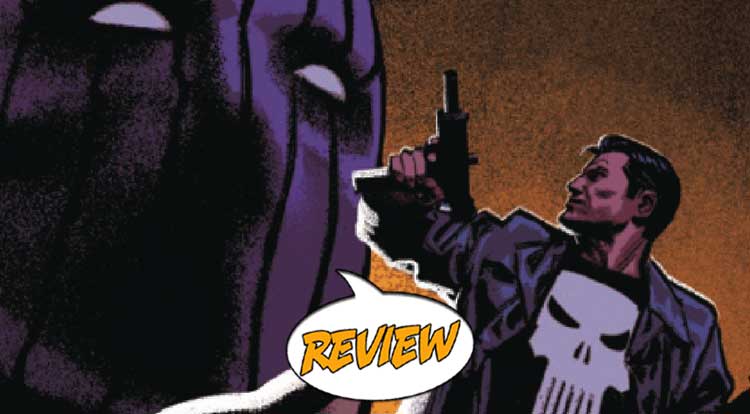 A desperate race against time and Jigsaw leads to conflict…  with Baron Zemo!  Your Major Spoilers review of The Punisher #11 awaits! Previously in The Punisher:  Loose in the nation of Bagalia (a Hydra stronghold) The Punisher has been hunting down Baron Zemo and killing anyone who stands in his way.  After a run-in with his old nemesis Jigsaw, Frank was forced to protect a woman named Sister Mercy, a nun who helped him to overcome his demons in a Bagalian prison, only for Jigsaw to kidnap her and speed away!

As this issue begins, Jigsaw and a couple of his flunkies are racing away from an enraged Punisher, wondering how the heck Frank got “so good on a damn motorbike?”  It’s… not really a good opening line, honestly.  In an attempt to get away clean, Jigsaw throws the nun he’s kidnapped to her death, but all it does is slow Frank down a little bit in his pursuit, giving him a chance to call his employer Baron Zemo.  It goes badly (more on that later) and convinces Zemo that it’s time to pull up stakes in Bagalia.  As Punisher gets back on the trail, it looks like The Punisher is going to take him down when a massive explosion rocks the city.  Zemo has blown up his own consulate and fled the country, changing it from a cycle chase to a desperate attempt to capture Zemo’s fighter jet.

I am not feeling Rosenberg’s dialogue in this issue, at all.  The moment wherein Baron Zemo (who has usually been written like an aristocrat with an implied German accent and a sesquipedalian vocabulary) starts screaming and dropping implied f-bombs in a rant more suited to a Sopranos extra, ending with a vow to use Jigsaw’s face as toilet paper.  The ending is also very hard to follow, which I’m almost certain is going to boomerang back next issue and show that it’s not actually Zemo at all, but the Punisher wearing his mask.  In a larger collection, it might even work, but here it’s just a confusing, overly dark sequence.  Overly dark describes most of the art in this issue, actually, though the big splash of the massive explosion is pretty neat, in a technical sense.  Had there been some indication of what was being blow up rather than just a gradient mushroom cloud on an orange background, it could have been a killer moment.  There’s an impressive amount of texture and grunge on every page, befitting a Punisher story, though, and as much as the long chase frustrates me as a reader, it looks quite good.

Like so many modern Marvel comics, this issue will probably read well when collected into a larger trade paperback, making this issue’s all-out action part of a larger canvas that makes narrative sense.  As an individual issue, The Punisher #11 only pauses from breakneck pace to give last rites to a woman killed in a truly brutal way, with overly dark coloring that negatively impacts the story being told and some truly awful dialogue, earning 2.5 out of 5 stars overall. Much like my recent foray back into the world of the X-Men, it seems like a comic stuck in the 1990s in all the worst ways.

The premise of infiltrating a Hydra stronghold has legs and there's a lot of cool explosions, but this issue ends up feeling really slight.