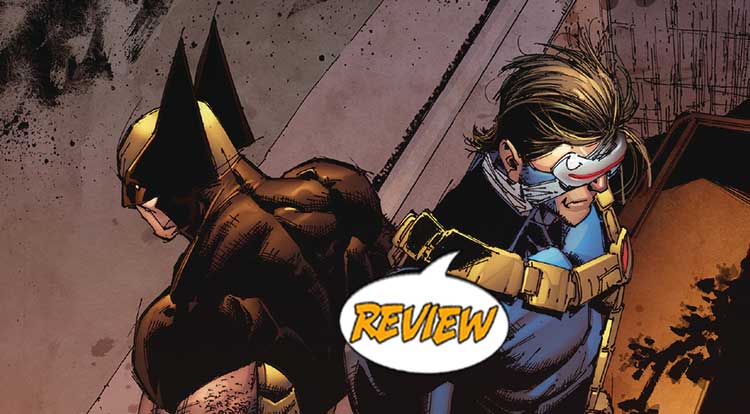 Previously in Uncanny X-Men: With most of their teammates presumed dead after a cataclysmic battle, Cyclops and Wolverine have banded together the last X-Men: Magik, Mirage, Karma, Havok, Multiple Man Camber, Hope and Banshee (who is currently undead.)  Last time around, former X-Man Joseph was killed by former X-Man Kwannon and Mirage suddenly got a psychic flash that former X-Man Wolfsbane was dead.

We open with an already drunk Wolverine, drowning his sorrows in Jack Daniels after receiving the bad news about Wolfsbane.  Cyclops arrives just in time for them to snarl at one another about the upcoming funeral.  On the one hand, Cyclops comes across as a tyrannical idiot, but it’s less of a problem with Logan acting like a petulant, contrarian child.  Rather than go to the funeral, Wolverine collects Kwannon (the ninja from whom Psylocke got her Japanese ninja body, now back in her own form) and sets out with a little help from Madrox, who pulled a police report.  While Cyclops gives a looooooong list of dead X-Men at Wolfsbane’s funeral, Logan and Kwannon tracks down the men who killed Wolfsbane.  He insists that she read their minds and show him how it happened, giving us a creepy sequence wherein she is approached by four men, initially for flirtation purposes, leading to her being murdered in a hate crime when her mutant nature becomes clear.  It’s implied that they not only kill the men, but a group of O*N*E soldiers who arrive to take them down (which actually works to the disadvantage of the comics, as I had to flip back to figure out what just happened) after which Wolverine returns home to start a fistfight with Cyclops.  As the issue ends, Cain Marko breaks up the scuffle, asking why they don’t fight Black Tom or Mister Sinister or Emma Frost, followed by a shocking response: “Who the hell is Emma Frost?”

This book comes after the big resurrections of the primary characters, Cyclops and Logan, but they’re immediately at each other’s throats as though it were 1995 again.  This issue bothers me for a number of reasons, not the least of which is that its tragedy is predicated on a woman with a healing factor and super-human durability being killed by four gamer douches in a park.  Add in the fact that we’re supposed to somehow buy into the idea that dozens of X-Men (many of whom were recently seen in much better X-books) were killed off-panel, the idea that “big and shocking” is synonymous with good storytelling and even the ridiculousness of the eulogy here make it that much worse.  It feels like the Monty Python ‘Cheese Shop’ sketch rather than a meaningful moment of drama, and it’s actually more successful than much of the dialogue in this issue.  The art is…  okay?  I guess?  There are clear elements of Pat Lee that bother me, but mostly Gomez does a pretty solid Adam Kubert cover-band, befitting a comic book that aspires to be ‘Fatal Attractions’.  The fight sequence between Cyclops and Wolverine doesn’t seem to make sense in a three-dimensional setting, though, and many of the facial expressions are sketchy at best, making it difficult for them to convey meaningful emotion for the characters.

BOTTOM LINE: I DO NOT CARE FOR THIS

Much as I felt in a recent review of DC’s Next Big Thing™, I feel like this book is trying too hard to capture a lost era of darkness and despair in comics, calling back to a time where the X-Men careened from event to event, shedding members and gaining new ones in a swirling cycle of death issues and chromium covers.  Uncanny X-Men #17 has issues with pacing and dialogue that render its attempts at generating emotion unsuccessful for me, with art that feels uninspired and familiar and a story that (save for the last page Wham Line) fails to engage me as a read, earning an underwhelming 2 out of 5 stars overall.  I’d been enjoying several of the X-books that were cancelled leading into this book, so it’s actually even more disappointing on that level.

A funeral, a fight scene and some truly leaden dialogue make for a forgettable issue, albeit one with a last page reveal that seems interesting.