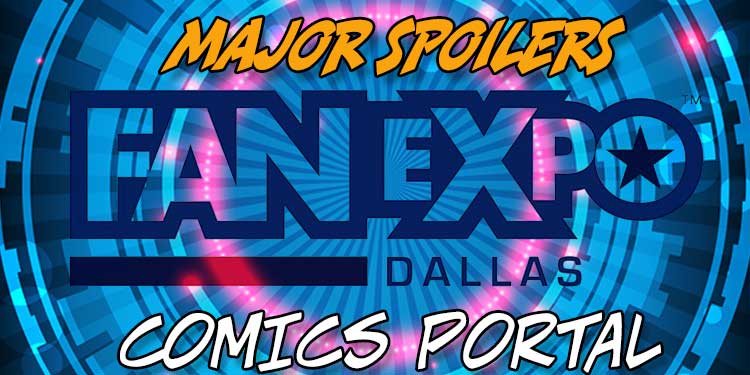 As much as cons are great places to pick up comics and related treasures, I spent a lot of time interacting with people on both sides of the table. And it got me to thinking–maybe the best part of cons is NOT the stuff, but the people.

I attended the 2019 Fan Expo Dallas in Texas, a big and growing pop culture/comics convention in Texas, over the weekend. It was quite a time for a great many people in attendance! Thanks to the folks there who granted me a press pass to attend!

HOW WAS FAN EXPO DALLAS? I guess you can tell it’s convention season because I’m talking about cons a lot these days! I actually get a weekend off this coming week! What will I do with myself?

Last year was the first time I had attended Fan Expo Dallas, and it was a big one then, too! This year, a different part of the Kay Bailey Hutchinson Convention Center was used, and it seemed bigger, too! But then, this is Texas, where everything is bigger, right?

The dealers area was massive, seemed like, and there were a lot of pop culture items for sale, including what seemed to be a big increase in anime items. Also, the media guest signing area seemed bigger as well.

When it comes to comics, though, I thought that focus hadn’t been quite as large. Granted, they had big names in the industry, including John Byrne, Mike Zeck, Scott Hanna (who I had the good fortune of being a neighbor to in the Stabbity Bunny booth), Doug Mahnke, Peter J. Tomasi, and Steve Rude, just to name a few. I was saddened to see none of the Indie comics creators I met last year there. Now, I did meet several new ones, including Zain Shenwari from The Elemental Balance, who I am looking forward to interviewing for my podcast very soon. But I did miss the good folks from last year, and I hope they are doing well!

Granted, this con took place on the same weekend as Free Comic Book Day, which I hear did spectacularly well yet again! Oddly, though, our booth seemed to be the only one giving out FCDB books, these from Scout Comics. I really thought we’d see more comics people handing out the good stuff that makes FCBD so popular. Sorry, didn’t happen.

Also, I was surprised that only DC and Zenescope from the bigger comics companies were represented. Yes, there were smaller, more independent publishers, but I thought other “big names” would have been there. Maybe next year?

Still, I enjoyed Fan Expo Dallas quite a bit, particularly when I got to briefly listen to Zachary Levi (Shazam) entertain the long line of fans patiently waiting for his autograph. He seemed to delight in the movie’s success and his part in it. Good for him!

PEOPLE MADE THE CON GO ‘ROUND And that leads me into my main topic for this column–people at cons interacting. Fans of all kinds were there, and they shared a passion for their particular genres, be it comics, anime, movies, TV, or other forms of entertainment. The people who seemed happiest there were the ones talking with others, sometimes quite animatedly.

I mean, I have gone to many cons and come back with items I LOVED, but over time, what remains in my memory, long after those items have faded and fallen apart, was the interaction with both pros and other fans over the years.

As I mentioned previously, I was in a booth next to Scott Hanna, a comics professional who is among the very best, and is likely best known for his inking. I noticed how he interacted with fans who wanted commissions or other artwork he had made. He was always professional, but made people happy. When fans picked up their commissions, he wanted to be sure that he had exceeded their already high expectations. And almost all of the time, he did!

Some fans were chatting with various pros, and they appeared happy to be able to do that. I know that some comics professionals prefer the chance to interact with fans more than just a moment or two because it lets them know what they’re doing well or not so well.

In my observations, the folks walking the convention floor who didn’t seem as happy were the ones who didn’t talk with others, including pros or other fans. Who knows? There might be pressures at home that are stealing their focus away, but I wished they could have shared in the happiness around the floor.

GO WITH OTHER FANS

I often like to point out that it has made my convention experiences more fun when I go with other fans. We would often book rooms in a nearby hotel, eat together, and share what happened with us that day or over the weekend.

I compare that to when I have gone to cons on my own, which I often talk about. I’ve made quick rounds on the floor, bought what I wanted, then got bored and left the con after only an hour or two.

I highly encourage you to find others to share this experience with.

Granted, con organizers would love it if you would bring more people with you when you attend. It increases their profits, after all! But it’s more than that–it’s a chance to share a fun time with people who might become your friends outside of the con. People with share interests often become friends, at least in my experience.

One thing I’ve noticed from the other side of the table is that a camaraderie often develops among pros who go to and exhibit at conventions. They share experiences and expertise, such as which airlines they would recommend or what cons are ones they prefer. When this con was ending, many pros turned to others creators and checked to see when they would be at other cons again. I see the same thing with fans who meet up at cons. “When will I see you next?” is often an important question as the time winds down.

I point this out because I have often found comics a solitary experience. You go to your store, pick up your comics as quietly as if you are in a library, take them home and read them alone. Then you wish you had someone to talk with about them. The online experience has faltered for many of us, with most postings there are “gushers” who love everything a creator/comic does to “bashers” who hate everything a creator/comic does. I mostly fall in the mid-range, so I cherish the chance to discuss this passion with those who just might change my mind if we talk to each other with respect.

My wish for each of you readers is that you get to enjoy that experience at conventions in your area or wherever you attend. It’s so worth it!