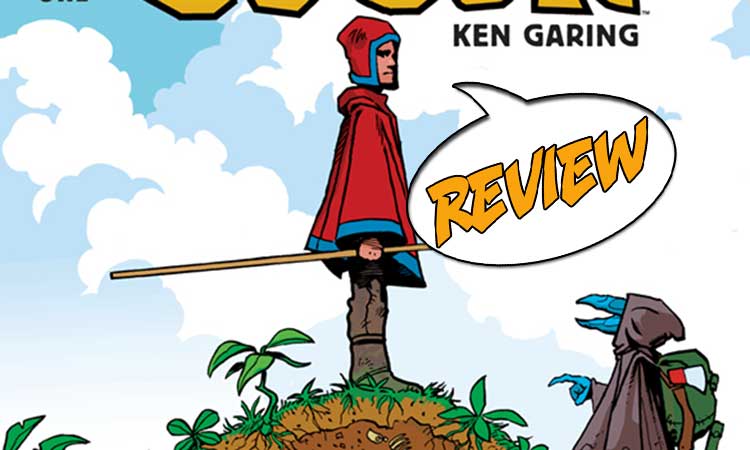 A young scholar must become an adventurer, and on his journey, he awakens the protector of the world.

Among the floating islands of Altara, a young student named Armano is caught up in a quest to save his world from invasion! And what is in the mysterious scroll that everyone wants? Find out in Gogor #1 from Image Comics. This is a new, high fantasy story written and drawn by Ken Garing. On a fascinating world of floating islands, where either everyone is very small, or creatures we know as small are much larger, conflict is brewing. And a young scholar is torn from the comfortable world of his studies to become part of something much bigger.

A CLASSIC STYLE QUEST IN A RICHLY POPULATED SETTING

Gogor #1 is the start of a new series by a creator I did not know. The art on the cover drew my eye, and I’m really glad that it did. It opens right in the middle of the action. A young man in a red cloak, riding what appears to be a shrew, is being chased by a group of armored men riding some sort of insects. They race through the forest, and the armed men shoot arrows with a sort of arrow gun. Armano, because that’s who this is, evades them and races through an underground tunnel the other men can’t get through. He races to the cliff edge at the end of the floating island…and his mount, Mesmer, leaps. He’s like a shrew with flying squirrel gliding. He manages to land clinging to the next island over.

It’s a heck of an opening. What we see is perfectly clear, but it’s also every bit part of another world. There is no doubt that Altara is different from what we know. And we learn that Armano has some scroll that’s really important.

When he and Mesmer take a break to rest, we get a flashback to what set them on this path. Back where he came from, his home (or school, rather) was attacked by armed men on bugs. One of the senior men from the school runs up to him, hands him a scroll, and tells him to take it to Greenpeak. So that’s why he’s here.

Later that evening, a robed stranger approaches his camp. He appears to be a blue lizard-like guy. He identifies Armano as a scholar by his distinctive cloak, and Armano tells him more about the attack made by a group called The Domus. The stranger is able to read the scroll for him, and advises Armano to go to Greenpeak and recite it there.

The next day, the lizardman, Wexil, takes Armano to his friends, where he can get supplies. We meet an interesting and very diverse group of people – artisans and workers. The rhyme on the scroll mentioned “Gogor,” and Minra, the painter, knows of a legend about a Gogor who awakens when trouble comes to the land.

There is a cut to Armano and Wexil on a craggy hill. Armano recites the poem. Apparently several times, all to no avail. The scroll case rattles, and upon looking closely at it, he can open it up and a seed rolls out. Wexil advises him to plant it. The Domus show up, this time riding what look like wasps, and arrest them. Wexil calls out for him to recite the poem, which he does as he’s being wrestled to the ground. The seed sprouts, the ground splits asunder – and Gogor appears!

A BEAUTIFUL, IF STRESSFUL, DAY

The art of Gogor #1 is crisp and engaging. As we see the characters riding their mounts – shrew and bugs – I honestly cannot tell if the people are meant to be tiny, or if they are normal sized and the creatures are huge. Or even if it’s somewhere in between. But in the great scheme of things, this isn’t important. But it serves the purpose of establishing that this is a world that does not operate by the rules we know.

I think this is important because as I’ve mentioned, this is a world of floating islands. This is fascinating in the art. A few of them seem to be connected by some sort of bridges, and it is apparent that people can travel between them. On the other hand, some are not so directly connected, because Armano and Mesmer had to jump across, and The Domus had to go back for winged insects. But there is a truly lovely double splash showing a ring of floating islands circling the sun – absolutely breathtaking.

This is a world that has close ties to nature. It is very woodsy in appearance. Even the school is a small complex in a larger forest. Wexil’s friends live in an odd house with plants indoors and out, exotic birds and turtles outside, and butterflies flitting about. Gogor himself springs from a seed, and in his full form looks very much a part of the land with all kinds of plants, fungus, and creatures on him. It is truly imaginative.

On the one hand, Gogor #1 hits several beats of the outset of the classic hero’s journey. There’s nothing wrong with that – it’s classic for a reason. What really lifts this up for me is the interesting world it is set on, as well as the concept of the protector of the world being very much connected with nature. It’s a decent beginning, just intriguing enough to make me curious about what will happen next.