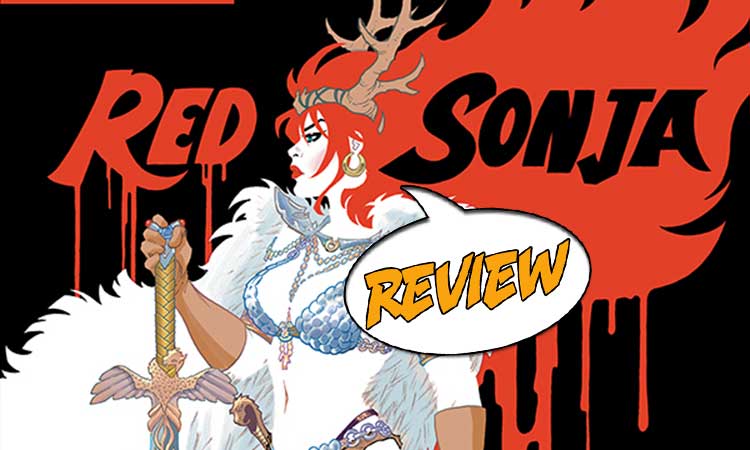 All good action stories need a dose of humor, and Red Sonja #4 provides it in spades. Fun, brash and violent, it sets the story arc perfectly for the final denouement in the next issue!

The Zamorans assemble their chariots and the Hyrkanians gather their courage as Red Sonja and her forces prepare to face the Zamoran Emperor Dragan in a battle to the death.  But what tricks does she have up her (chainmail) sleeve?  Find out in our Major Spoilers review of Red Sonja #4! Previously in Red Sonja: Know, Oh Ye Prince, that Red Sonja, wholly created and owned by whichever company has the current license, has spent her life finding a place for herself in the bloody and turbulent Hyborian Age.  While her counterpart, Conan of Cimmeria, has smoldered and butchered his way through countless kingdoms, Red Sonja has journeyed to the Khitan Empire and learned the arts of war.  Now, she must use this knowledge to protect her people, the Hyrkanians, against the depredations of the insatiable Zamoran Emperor, Dragan…

As a Doctor Who fan, I’ve spent a lot of time pondering the lost potential of Colin Baker, the Sixth Doctor, and wondered what could’ve been done to save him.  Every time you watch one of his stories, the single, unavoidable fact is that damned Technicolor nightmare of a coat is the greatest stumbling block to taking the character seriously.  It undermines his performance, it affected the way the production team lit scenes he was in and it remains a frequent butt of jokes.  Imagine if he’d got his first preference – all black?

Something similar happens with Red Sonja.  Her single greatest characteristic as she roams Hyboria clad is that ridiculous, chainmail costume.  We all know the single reason why it’s done – teenage boys.  But like her fictional counterpart, the Sixth Doctor, the costume undermines a lot of the good work the artists and writers bring to her books.  Happily, though, despite all that, the positive attributes to Red Sonja #4 do outweigh this otherwise glaring situation.

Writer Mark Russell eschews the usual cod-medieval way of depicting dialogue in a fantasy setting.  While it isn’t teen speak circa 2019, it isn’t at the other end of the spectrum replete with thees and thous until your eyes bleed.  There’s a level-headed attitude to the dialogue, allowing the story to progress without the reader getting bogged down in the language.

Russell also knows when to be serious, and when to have some fun with the characters.  Red Sonja muses on her reasons for leaving her native land, Hyrkania, and the decision to come back and save it from the Zamorans.  There’s also a neat, sobering scene during her training in the far East, which does a lot to develop her character and arm her with the skills necessary for war.

On the flipside, Russell and artist Mirko Colak are prepared to have fun with the material.  The Emperor Dragan wears a stylized pepper on his head, for no apparent reason other than it looks hilarious.   It made your reviewer give a double take before dissolving into laughter.  There are also plenty of quips and banter amid the action.  I’ve often found you get a good sense of a writer’s skill if they can handle humor well.  Mark Russell handles humor very well, especially in a flashback scene where Red Sonja monsters several opponents in a training session.  Their reactions to her overwhelming strength and skill is delightful.

Colak’s art is exemplary.  His expressive line work makes the action really pop from the page and coupled with Kelly’s coloring, makes Red Sonja #4 one of the best looking releases for this week.  I did though feel confused at some points, though – the panel layout doesn’t always lead where you assume it’s going to go, and there was one instance where a character looked very much like another.  Despite that, the artwork is the strongest feature of Red Sonja #4.  Also, to play the hypocrite for just one sentence, Colak really knows how to draw Red Sonja – really.

For a character part inspired by Robert E Howard, and co-created by one of comic’s greats, Roy Thomas, Red Sonja has never really gained the traction the character, or the setting, deserve (though let’s not forget Gail Simone’s excellent work with her).  But, it feels to me that this current run has some of the strongest material of the canon.  While Red Sonja #4 is a waypoint to the final confrontation, it is an entertaining mix of harsh violence and witty banter, which I’m sure we can all appreciate!