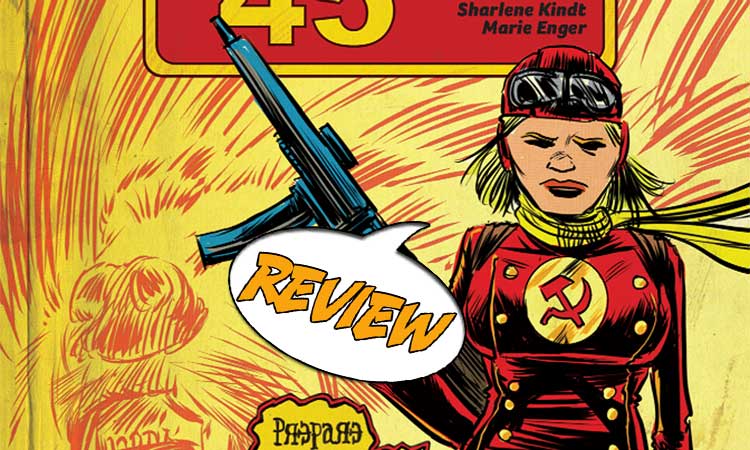 In the past, the last mission of the Black Hammer Squadron is coming to an end, but what will it be successful? In the present, old comrades are gathering for an event, but what is it? More answers are met with more questions in BLACK HAMMER ’45 #3 from Dark Horse Comics, on comic shelves now! Previously in BLACK HAMMER ‘45: An aged Hawthorne Hammer and his one-time squadron member Li have been joined by fellow World War II veteran and super-powered hero Wingman as they continue their journey to a mysterious memorial. In the past, Hammer and JP have teamed up with the costumed hero, Abraham Slam. They are currently traveling to Vienna via jeep to save the lives of an important scientist and his family.

“WAR IS HELL” IS AN UNDERSTATEMENT

In the present day Spiral City, three veterans of the Second World War are traveling together to attend some sort of remembrance. Words have been exchanged and Hawthorne Hammer has just dressed down the elderly, one-time costumed hero known as Wingman. Wingman has been talking about the war, the stories, and his part in them, but Hawthorne is in no mood to hear it, not today. Chastised, Wingman tells them to tell their stories. He does not believe what he read in the papers could have been the same as what actually happened.

In 1945 Austria, Hawthorne Hammer is leading his squad mate JP and the costumed hero known as Abraham Slam on a mission to save scientist Greenbaum and his family from not only the Nazis who are holding him, but from the approaching Russian armored division known as the Steel Avenger. As they race across the blasted battlefields outside of Austria, they are pursued by Nazi motorcycles sporting sidecars and mounted weapons. As Slam navigates their escape, Hammer blasts away with his service pistol. Slam suddenly tells Hammer to take the wheel and leaps onto the hood of the jeep, then into the waiting formation of approaching motorcycles. Pistols drawn, Hammer and John Paul make short work of the other two mounted attackers while Slam uses his fists to finish off a third. Awed by the powers of Abraham Slam, JP tells Hammer that they should let Slam complete their mission; the papers will most likely say he did it anyway. Hammer is having none of it, they were given a mission and they are going to complete it. As the trio prepares to continue their journey, they find themselves confronted by three Panzer tanks.

Meanwhile, at the prison camp in Vienna, the Steel Avengers have arrived. The Greenbaum family is in hiding, watching as the massive Russian steel figures lay waste to the troops, while sparing the prisoners. Just as one of the Russians uncovers the hiding family, another sound gains their attention. From out of the sky, the plane of the dreaded Ghost Hunter has arrived. His mission, to stop the escape and capture of the Greenbaums.

Confronted by more superior forces, will Hammer and his team make it to Vienna in time to rescue the scientist, or will they fall captive to one of the other weapon warriors?

I have discussed how the Jeff Lemire (Sweet Tooth, Black Hammer), Ray Fawkes (Batman Eternal, Constantine) story is wonderful, and Fawkes script is outstanding. writing on Black Hammer ’45 at least two other times now, but it bears repeating: it’s damn good. I have no connection or prior knowledge of the Black Hammer Universe, and began this series drawn in purely based on my love of war comics and characters such as Captain Midnight and the Blackhawks. Yes, this has elements of those iconic series, but it takes it another level, or should I say it takes it down to another level. This is not over-the-top, four-color patriotism and waving flags. This story is dirt level, grungy and dark, but not dark enough to make it fatalistic. There are elements of the treatment of the main characters, all people of color, which are discussed, but it is discussed realistically. Li, having played the more level headed and accommodating of the two present-day main characters, verbally tears into Wingman for what sounds like an apologetic remark at the worst, un-informed at the best. It strikes home. While it may have been meant as a little aside, it opens up the idea that events are viewed through your own experience.

The artwork by Matt and Sharlene Kindt… what else can I say that I haven’t already. It is beautiful, it is haunting, it is wonderful. Thank you.

The entire series of Black Hammer ’45 has been a treat, but this issue seems to have gotten another level in the character development. Hammer, portrayed as driven in the previous issues, seems more so here. He will go to any lengths to complete his mission, even when going with an obvious better plan will mean the possibility of failure. I just wonder what this will cost him down the road.

A trip down memory lane as well as a character study of one man’s desire to prove himself, Black Hammer ’45 #3 is all that and more.

Action packed, dramatic and just a hair nostalgic, Black Hammer ’45 #3 should be on your pull list now.