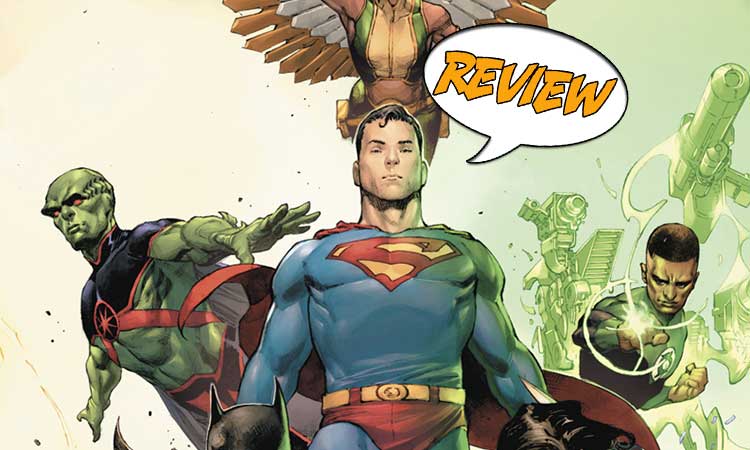 Tim Drake has fractured memories of Young Justice, and the Gemworld itself is fracturing apart. Is there some sort of connection? Find out in our review of Young Justice #5 from DC Comics. Previously in Young Justice: The ruling Council of Gemworld has been mired in politics, with Lord Opal making enough deals with some of the other members to render it essentially useless. Lord Opal also looms large over the farming area where Conner Kent lives. His guards bully the villagers there, until Conner stands up to them. Conner also finally gets in a word edgewise to Bart (Impulse) to ask him how he got there, and with whom. It also turns out the Gemworld has been having some weird tremors that don’t just shake things around – they literally rearrange reality.

A MEETING OF ROBINS

Young Justice #5 opens right at the point where the young heroes break out of their cells in Lord Opal’s prison and make their way outside. Those who can fly, fly. Those who can run do so. Amethyst summons her flying horse – and that flash of magical energy attracts the attention of Lord Opal. He faces them down, and worse yet, part of his arsenal is kryptonite.

Then there is a flashback to two days ago. I like this as a storytelling device, but I have to say that this many issues in, the flashbacks have been increasingly disjointed making it hard to keep track fully of what was going on before everything converged on Gemworld. This time we’re outside the Hall of Justice, and Stephanie Brown and Tim Drake are smooching. They’re there for a reason, shortly to become clear, but first Stephanie gets a text from her dad, the master criminal. But then Zatanna arrives. It turns out that both Robins have had some odd experiences with other timelines and seeing other versions of themselves. They’ve both seen some pretty strange things in their time, but something about this concerned them more, and they came to see an expert.

Zatanna takes a psychic peek into Tim’s mind, and something odd happens. Tim feels like he had a whole other life – with a team. Zatanna agrees and wants to bring him inside and try to find out more.

Back on Gemworld, Tim asks Opal flat out how he got his hands on kryptonite. He ignores this, accuses them all of trespassing, and informs that that that gives him the right to all their stuff – most relevant, perhaps, to Amethyst as he can lay claim to her kingdom. Impulse grabs the kryptonite and does what he does best – runs off with it.  He’s back before Opal has much of a chance to react, but now that Conner isn’t powerless, they fight. There’s another earthquake, and Amethyst realizes that Lord Opal himself, and his use of power, is the cause.

Returning to two days ago, Tim Drake has remembered that he was on a team called Young Justice, a memory he had been repressing. And Stephanie was there, even though none of this has triggered her own memories. Time needs to find out what happened to Conner Kent; Stephanie needs to deal with her father. They agree to part for this and meet back again, in two days.

A LOT OF ENERGY

Young Justice #5 is full of action, not to mention some weird goings-on. The art captures the near constant motion and there are some really great moments in it. I love the splash page when Lord Opal shows up, looking larger than life and looming over the heroes. His cape flows out all around him, and he has some kind of vicious dogs or wolves leashed under his control. It’s dramatic and imposing.

The contrast between this and two short days ago is enormous. In those scenes, everything seems so calm and sunny. There’s some nice tension portrayed in the two Robins. It comes across both that they are fairly unflappable, but that whatever has happened this time around has actually shaken them up.

The big fight, while rather short, is full of motion. I really enjoy the humor of Impulse running off with the kryptonite and not wanting to miss any of the action, and then everyone barely having time to react to this by the time he gets back. It’s also an effective way to show us just how fast he is.

BOTTOM LINE: A SOLID ADVANCEMENT OF THE PLOT

As an issue, I like the pacing of Young Justice #5. As a series, it seems to be kind of irregular, sometimes racing ahead, sometimes getting stuck for a while. While the various flashbacks are interesting, especially from the standpoint of trying to figure out if (or how) they tie in but it’s starting to get to the point where everyone has their own very diverse backstories, and one wonders if the creative team will be able to give each of them sufficient time to pull the all into the story.

One wonders if the creative team will be able to give each of them sufficient time to pull the all into the story.