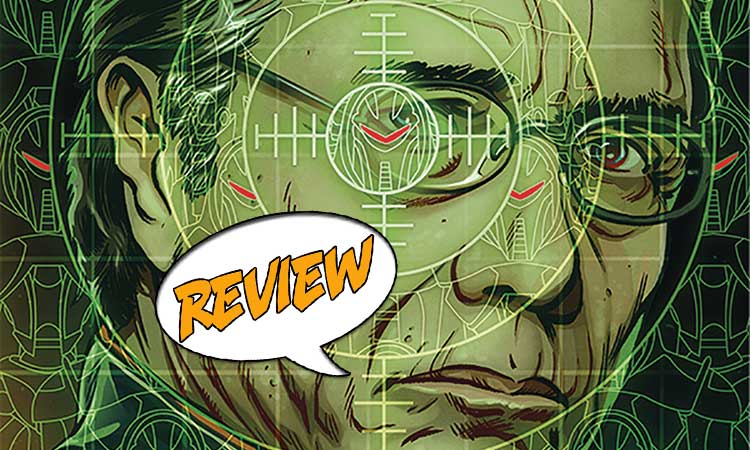 On New Caprica, the rebels face down their internal demons as the Cylon overlords squabble over the spoils of victory.  On board the Galactica, Admiral Adama confronts a sergeant who has lost her way.  Can he help her find her way home?  Find out in our Major Spoilers review of Battlestar Galactica: Twilight Command #2! Previously in Battlestar Galactica: Twilight Command: Running concurrently with events seen in season 3 of the television series, the rebels on New Caprica gather to challenge their Cylon overlords.  Operating as the Twilight Command, they have captured and reprogrammed an old-style Cylon unit, and plan to strike back.  And onboard the Galactica, Sergeant Flores comes face to face with Admiral Adama…

I AIN’T NO DAMN TOASTER!

As a Doctor Who fan from way back, there’s a lot of enjoyment to be had by seeing how writers jam their storylines into established continuity.  Similarly, we see in Battlestar Galactica: Twilight Command #2 writer Michael Moreci take up the established facts of the rebellion on New Caprica and add in his own characters and spin on events.  They certainly don’t contradict what we saw on television, but they add a different angle and spice to established events.

Battlestar Galactica: Twilight Command #2 picks up where the first issue left off, with Sergeant Flores on the Galactica and the team of rebels on New Caprica.  Like the denizens of the fleet that escaped the Cylon holocaust, these people are scarred by the loss of all they had and all who they loved.  With the death of almost her entire command, Flores can’t see a way forward other than to escape the Galactica.  Down on New Caprica, the rebels battle their own demons – Spark finds solace in marveling at the Cylon who has overcome its programming, while still dealing with the death of his family.  Devos, the sole survivor of Flores’ troop, finds solace in his belief that his sergeant will find a way to win.  There are some very nice, moving indeed, character moments for the characters.  Survivor’s guilt, cynicism, and feelings of hopelessness are deftly woven into the story.

On the whole, the pacing of the story is well handled.  We have the scenes on the Galactica, where Adama confronts Flores.  Back on Caprica, there’s the sort of tensions you would expect from a group of rebels, while the most intriguing moments are reserved for the dissension within the Cylon hierarchy.  With Cavil, on the one hand, demanding a free hand to act as brutally as he wishes, and the other members arguing for moderation, there’s a tense disconnect between the overall Cylon strategy.  Within that disconnect, there may be hope for a human victory.

On that score, Battlestar Galactica: Twilight Command #2 touches on something that made the television series something more than a dead ahead run for survival by the routed elements of humanity.  The idea of free will, even for self-aware robots, is a fascinating concept.  The Cylons would argue they were oppressed from their very beginning, and destroying the Capricans was the logical act to take.  In this issue, we have the humans working to strike back, and we see how they place as much value on their freedom and self- determination as the Cylons claim for themselves.  Which leaves the reader to ponder who to back – their own kind, or the oppressed creatures who heroically shrugged off their chains?

One final word on Breno Tamura’s art.  It took a little while to grow on me – some of it feels quite rough, especially some of the close up work on characters like Cavil.  But overall, in concert with some very good coloring by Dijjo Lima, there’s a rawness to it that speaks to the humanity of the characters – human and Cylon alike.

For a series that is getting ready to take flight, Battlestar Galactica: Twilight Command #2 is a steady as she goes issue that continues the build up to the rebellion on New Caprica.  Moreci concentrates on the character moments, which work best in what is otherwise as staid rebels vs overlords storyline.  The established television characters don’t have much to do in the main, but he has established a stable for the series, with interesting touches.  In time, no doubt, the action will explode as the rebellion takes flight, and indeed, issue #3 does promise that.  But in the meantime, take some time to admire the character creation.

A quiet issue that further sets up the characters as the Galactica approaches New Caprica. There’s nothing truly remarkable here, as the Moreci is forced to insert his storyline into established continuity. But the character moments are well-handled and the shooting can’t be too far away…