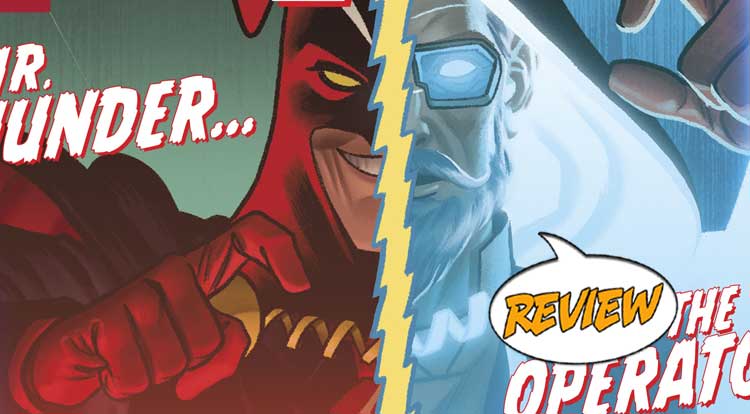 The battle to possess the H-Dial continues, but will Miguel come out on top?  Your Major Spoilers review of Dial H For Hero #2 awaits! Previously in Dial H For Hero:  On the road (in a food truck full of mayonnaise!) with the amazing H-Dial that gifts the user with a new superpower every time they place a call, teenage runaways Miguel and Summer come under attack by others who crave the power the dial offers.  With cryptic calls from the “phone zone” and no one to turn to for help, the adolescent adventurers come to a breaking point, where they either must work together or lose more than just the dial.

ON THE RUN WITH SUPER-POWERS

As we open, Miguel and his friend Summer are trying to figure out how to eat on the road, while his phone rings continuously, annoying everyone around them.  Out of sheer frustration, Miguel literally tosses it into the river, only to have a strange man named Barnaby retrieve it at the behest of Mister Thunderbolt (who looks nearly identical to Mister Thunder, one of Robby Reed’s original H-Dial opponents.)  Barnaby transforms into Jobu, The Zonkey King, a loving tribute to Dragonball in all its forms, and begins smashing everything in sight, forcing Miguel to take action.  Retrieving the Dial (with a little help from Summer, who hits the Zonkey King with the food truck), Miguel dials up his own manga-inspired hero form, leading to a wonderfully-drawn manga battle complete with beautiful cross-hatching and some incredible sound effects.  Barnaby finally explains what The Thunderbolt Club is, leading Miguel to make the only decision he can: Take the H-Dial to Superman!

But then the question becomes: Where is it now?

I’M TAKING ‘THE OPERATOR’ AS A PERSONAL SHOUT-OUT

This issue makes some strides in starting to open up the answers to the mysteries set up last time, revealing the past of the H-Dial, explaining the Thunderbolt Club and making it clear that many, if not all, of the previous Dial H stories can still have taken place.  Miguel’s Iron Deadhead form is wonderful, a black-and-white Guyver-style hero battling Zonkey King’s Goku impression, while maintaining both art styles, impressive work by Quinones.  I like the way this issue’s plot balances out, allowing Miguel to try and resist the call to heroism and ending with the big cliffhanger, but most of all I like the addition of The Operator, an actual guiding intellect behind the Dial’s madness.  With the intense darkness of so much of DC’s output these days (looking at you, ‘Heroes In Crisis’), it’s nice to have a lighter tone in this series.

When they said Wonder Comics was going to be aimed at younger readers, I worried that it might mean a lack of drama or stakes, but Dial H For Hero #2 proves that not to be true, providing a visually exciting issue with fun plotting and characters, earning 4 out of 5 stars overall.  I’m quite sad that this is only a 6-issue mini, but here’s hoping for more H-Dial in the near future.

Another fun installment of a book that fights DC's grimdark with some impressive success.