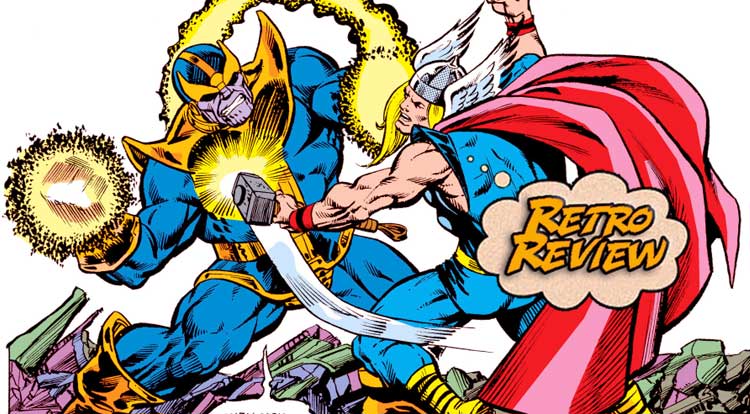 I still haven’t seen ‘Avengers: Endgame’, but at least I have previous stories of The Avengers fought an Endgame against Thanos to keep me company…  Your Major Spoilers (Retro) Review of Avengers Annual #7 awaits! Previously in Avengers Annual:  The Mad Titan Thanos has long harbored a love for Death herself, and as such, wants to kill as many people as possible to get close to his lady-love.  When last seen, in the pages of Adam Warlock’s solo book, he and Gamora, the deadliest woman in the galaxy, were working together in pursuit of his lofty goal…

…but then, ‘Warlock’ got cancelled.  Being that this is the Marvel Universe, though, that doesn’t mean that their story ends there.  In fact, as the opening sequence of this issue shows us, important things have happened off-panel since we last saw them. Gamora dies, leaving an angry Adam Warlock to absorb her essence into his Soul Gem (which is the then-current name for what they now call The Infinity Stones)  As Warlock swears to find Thanos and avenge the fallen assassin, we cut to Earth, where the Mighty Avengers are holding a strange midnight meeting to discuss… something?  It’s never actually made clear why the team has assembled in the middle of the night, but they’re quickly interrupted by the arrival of Mar-Vell and Moondragon, both of whom were drawn to Avengers Mansion by ominous premonitions of doom. Warlock arrives to explain that Thanos’ fleet is on its way (and also gives a multi-page recap of Thanos origins, the history of The Cosmic Cube, the Infinity Stones, Thanos’ first assemblage thereof and the events that led to Gamora’s death, all assembled from Starlin’s plots for the issues of Warlock that would have come, had the book not been cancelled) and that the Mad Titan’s current plan to impress the personification of mortality is to extinguish every star in the heavens.  As the team piles into Moondragon’s cruiser to head into space, each Avenger gets a little time to muse about their own part in the coming war and whether or not they’ll survive it.  It’s nicely done work by Starlin, and it really helps to get into the minds of these heroes, especially if you aren’t aware of their 1977 statuses quo, including reminding us that Mar-Vell is sharing a form with Rick Jones at this time.  Thor and Iron Man run interstellar interference, while the rest of the team takes the battle to Thanos’ flagship, where Warlock finds the mindless shell of his friend, Pip The Troll.  Absorbing another of his friend’s souls, Warlock is more determined than ever to bring Thanos down, leading to a beautiful shot of the two heroes Jim Starlin is most associated with in action together. Thanos greets Captain Marvel, whom he recognizes as an old nemesis, but barely recognizes Warlock, who has a much more personal grudge.  Overhelmed by grief and rage, Warlock strikes… …and Warlock DIES.  Just that quickly, his struggle is all over, and even Thanos comments on how easy is was to defeat the wielder of the Soul Gem.  Iron Man and Thor arrive in time to destroy Thanos giant synthetic Soul Gem, but can’t keep him from teleporting away, while swearing his undying enmity for The Avengers.  As for Warlock, a tiny spark of life remains in his shell, allowing him to look up and see himself.

Or at least, a past version of himself, transported forward in time to witness his own death (a story shown from the other side in Warlock #11 a little more than year earlier), with the dying Warlock declaring his entire life a failure and insisting that his younger self end it all.  Warlock obliges, absorbing his dying essence into the Soul Gem to keep him from ever turning into the genocidal Magus, and the stable time loop is maintained.  In this telling, though, we see that Mar-Vell is just out of frame to witness it all, and we get to see what happens next, as Warlock’s consciousness awakens within the Soul Gem. “Adam Warlock is at peace,” intones Captain Marvel, just before he and the Avengers set out for ANOTHER ’77 summer annual, where they will meet Thanos in combat.  I’ll be honest: I was going to review THAT issue (it’s Marvel Two-In-One Annual #2, if you want to seek it out), but I realized that, not knowing how ‘Endgame’ ends, I wouldn’t want to accidentally create a spoiler situation for an unwitting Spoilerite.  Still, Avengers Annual #7 has a LOT going for it, with stellar art, some wonderful introspective dialogue and space opera by Starlin and a lovely ending for Warlock, earning 4.5 out of 5 stars overall.  The only real flaw in this book is a relative lack of The Avengers, and even that is an external concern in a book this well-done.

The "final" chapter of Adam Warlock's tale is that rare happy ending that isn't happy, isn't an ending, and has been undone by later writers, but still packs an emotional punch.