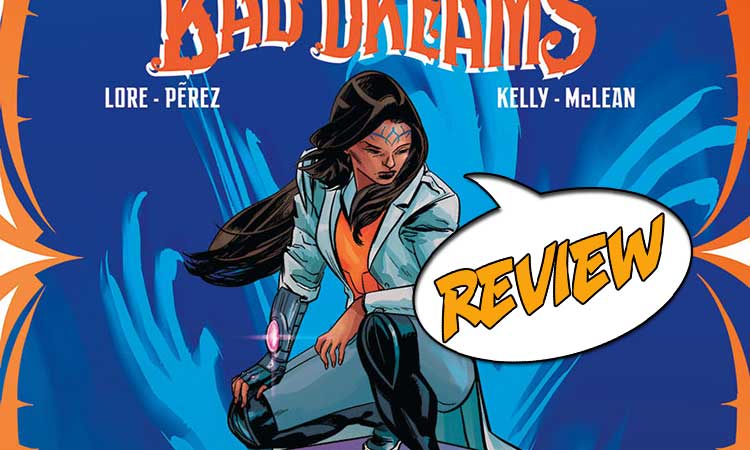 In a futuristic world where entities from dreams can slip into reality, it is Daher Wei’s job to track them and decide what to do about them. All in a day’s work, but what’s different about her new case? Find out in Queen of Bad Dreams #1 from Vault Comics. What does it mean to be real, and what does it mean to be human? In a future world, an incident caused beings from people’s dreams, now known as figments, to spill into reality. An enterprise has grown up around this – the Morphean Annex employs Inspector Judges to track figments down, but not just to dispatch them. Their job is to make the call – do they get reinserted into the dream, or are they granted agency in reality. And what happens with figments from the dreams of a powerful person?

Queen of Bad Dreams #1 opens right on the action, plunging us straight into the world. It is so well-crafted that, even though it is a strange, new world, we are subtly fed just enough bits of information to understand what’s going on. The sensation in reading it is that the world gradually expands around us as we go.

Daher Wei, the Inspector Judge (or I.J.) is battling a figment who came from the dreams of a precocious child and the narration that leads us in is not her thoughts; they come from someone who knows her intimiately, her ex. Daher is introduced as one of the best of the best, when it comes to being an I.J., and the narrator tells us that she never forgets that when you’re dealing with dreams, you’re actually dealing with people. Mull on that for a moment. It is an interesting thought.

Daher has a friend and former mentor from the Annex who’s retiring. He not so subtly asks if she’s heard from her ex-wife about his party.  Daher gets a message from the Chief, so they head back to the Annex. There’s a new situation. Emerson Chase is the son of an important politician (who happens to hate the Morphean Annex). A figment has escaped from his dreams.

This is a case fraught with challenges. Emerson is wealthy and privileged. He doesn’t want them messing about in his brain. He wants his figment, Ava, off the streets, but he doesn’t think they can let her stay in the world. Ava was the woman of his dreams for so long, growing, protecting him, until just a few months ago when she started changing and then she just…slipped out. Already I don’t trust him.

And then we meet Viv, who works at a shelter where figments stay. Viv and Daher were married; they have a daughter. Viv is our narrator. They still get along professionally, but things just didn’t work out between them. Daher asks around, looking for Ava, and gets a lead that points her to the bar with the delightful name of Pillowfort. Ava goes there on karoke night. Daher finds her and attempts to make some small talk. Ava becomes suspicious and runs; Daher chases her, catches up with her…and lets her go.

I really liked this issue. It succinctly sets up what Daher does for a living, and that figments have options for their future, and that Daher gets to make that choice. There is a strong sense that this little episode is only the tip of the iceberg, and that the main character will dig into whatever mystery she finds until she can get to the bottom of it.

The art in Queen of Bad Dreams #1 is terrific. Right away we are immersed in this world. The figment in the opening fight is meant to be from the dream of a young girl, and it looks like that’s where it came from. It appears to have been colored in with crayon, and it has weird teeth and a truly disgusting tongue. And then, as soon as this fight is over, we get a good look at Daher in her distinctive I.J. uniform, the sweeping coat, the practical boots. Between her glove and the special forehead crown she wears, she can manifest weapons to use against figments, which is a cool concept.

I like the look of the world. It is very sleek and modern. The cars are hover cars, with enough resemblance to cars that we recognize them as such. The Morphean Annex is very modern and spare, full of glass and virtual screens. There is a world of difference between that and the shelter where figments stay, which looks smaller, older, tucked away in the city as though figments are not fully accepted, even though they’ve been granted agency.

BOTTOM LINE: I CAN’T RESIST A MYSTERY, AND THIS ONE DRAWS ME IN