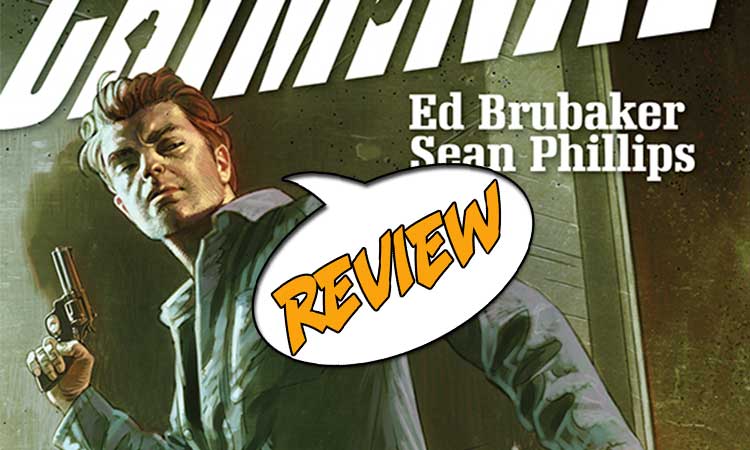 Ricky Lawless has always been a man on the run.  Now, methed to the eyeballs, can he outrun his demons?  Find out in our Major Spoilers review of Criminal #4! Previously in Criminal: After we spent the last two issues concentrating on a storyline inspired by the treatment of past comic greats, it’s back to regular criminal shenanigans as Ricky Lawless, riding high on a seemingly endless line of meth, plots his next criminal escapade.  Awake for the last five days, he’s haunted by figures who aren’t there, and memories he can’t shake.  Events take a violent turn before he seeks out an old flame in hope of finding assistance…

It’s back to regular illicit action in Criminal #4.  The long body of work by Brubaker and Phillips in this universe provides a deep setting, with different characters who can come to the fore when needed.  Case in point being Ricky Lawless, who has featured in other story arcs.  It’s March, 1993, and Lawless has been holed up in an abandoned auto shop for the last five days.  Recently paid in crystal meth for stealing cars, he’s been using again.  His paranoia is on the march, and he sees figures that aren’t there and soon makes a very poor life choice.

So, nothing new here.

The depiction of Lawless during the early pages of Criminal #4 is compelling.  Here we have a man slave to his addictions, despite his denial of being an addict, consumed by paranoia, despite being sure of his suspicions, trying to stay afloat in a world where the water level is always, always rising.  The look on his face that Phillips gives him on the first page is striking; a man adrift in a world he can’t quite grasp, his face half eaten by shadow.  The writing is equally striking, as the omnipresent narrator details Lawless’s downward spiral – the inability to stop using, the endless hallucinations and shows a man on the edge with nowhere to go but down.

And then Lawless sees his dead father in the toilet of a bar.

This week your reviewer also took a look at Detective Comics #1002.  Even though both of these stories are in the same genre (comics) we’re not even talking about works on the same level.  One provides a sugar rush and then a long drop, while the other engages the reader viscerally, tells a compelling story about a superficially attractive world, but spares no details about the corrosive, destructive nature of that lifestyle.  Criminal #4 is a wrenching story that reads very much like a novel, even though it is in the abbreviated format of a comic.

BROKEN BUT BATTLING ON

Ricky Lawless is scum.  He’s a killer, a robber, a drug user and a thief.  He’d kill you for the shirt on your back and not cast a glance over his shoulder at your cooling corpse as he makes his escape through the front door.  But in Brubaker and Phillips’ hands, he’s strangely a compelling figure who elicits sympathy and disgust, in equal measure.  In Criminal #4, his drug use heightens his fears, as well as revealing his grief over the loss of his father.  It allows him to give a long, eloquent speech to his ex-girlfriend about the nature of reality, referencing Vonnegut, Huxley and Robert Anton Wilson.

The characterization is also on point, with the narrator describing how he ruined a friendship with an old crony, Leo Patterson, at the same time as we see Lawless present Leo with the chance at revenge on a man who killed his father.  In the space of two pages, we see Leo’s belligerence drain away, and watch his hardened face as he drives cross-town with Lawless to seek that revenge.

In the notes at the end, Brubaker announces that future issues will feature the death of Lawless’s dad, who makes a cameo appearance in Criminal #4 as a vision.  While we look forward to that, we can savor the fine writing and excellent artwork in this latest issue of a damned strong story that only gets better with each issue.

And as a bonus, along with announcing future releases, Brubaker presents a several page review of a Depression-era noir movie, Wild Boys of the Road.  I’ll be tracking that down asap!

Crime doesn’t pay, but reading about it certainly pays off, again and again. Well-paced storytelling combined with characters both repellant and attractive, Criminal #4 pivots the storyline back to its criminal roots, and promises more, much, much more, to look forward to.