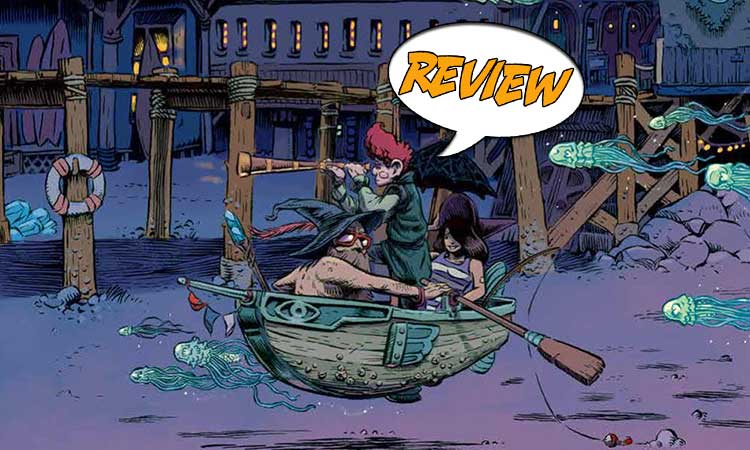 Hexley learned the spell he needed to save his homeland. How will that work out for him, and will he ever go back to the beach? Major Spoilers reviews Wizard Beach #5 from BOOM! Studios. Previously in Wizard Beach: Hexley Daggert Ragbottom has finally learned the spell he came for. However, he cannot leave the beach. He tries to do beach activities and look like he’s enjoying himself. He’s even met a young witch, Agnes, who seems interested in him. (Too bad he ran out on her on their first date.) He finally, grudgingly, admits to his Uncle Salazar that life on the beach is not all bad, and Salazar releases him from the curse. With a quirk of magic, he stumbles upon a secret meeting of Salazar’s friends and fellow-wizards. They’re planning something for Salazar and it sounds sinister.

GROWING UP AND FINDING YOURSELF

Wizard Beach #5 jumps right into the action as Salazar’s fellow wizards sneak up on his tent in the middle of the night and carry him off in silence, to who knows what doom. Meanwhile, in another part of the world that is not the beach, it looks like summer. The waterfall that was frozen in issue #1 is flowing; the brush on either side is lush and green. There is a battle cry, and we see hordes of magical creatures in battle, but they appear to be fighting mosquitoes now instead of ice giants.

Hex lies in a sunny meadow with butterflies around him and a book resting on his stomach. His father comes home in torn clothes and covered in insect bites. Yes, the cold weather is finally gone, but now the insects are a problem. They can’t go fishing or collect clean water. And in this moment, Hex realizes something. His father will not be content; there is always something for him to complain about. He refuses to try to live in peace; he does nothing but fight. Hex urges him to come to the beach and learn how to be happy. His father accuses him of having a rotted brain. Once again, Hex leaves home to go to the beach. It’s a really nice bit of character growth. Last issue, he looked as stubborn as his father, but clearly he’s learned something.

Back at the beach, Uncle Sally is not at his tent. Agnes passes by and Hex calls out to her. He says he’s happy to see her, and she challenges him. Is he really? What about going home? He tells her it didn’t work out like he expected, and he missed the beach, and he missed her. Then he tells her that he’s worried about his uncle. She isn’t ready to forgive him quite yet, but she is willing to help him out.  They go to the Wizard Beach Boat House where she finds a boat that’s been cursed with a tracking spell. With a smelly old hat of Salazar’s, maybe they can track him.

They find him in an underground room, seated in a chair. Hex apologizes for leaving, and whatever trouble he’s in, and says he’s going to get him out. The other wizards arrive and we get the setup for a big showdown. But Salazar believes these are his friends, and that it may not be what it looks like. He wants Hex to trust him — and not to attack them. Hex is unsure about this, but has learned to trust the nutty old wizard, and stands down. And Salazar was right – it was not what any of them were expecting. It’s a charming surprise, a lot of fun, and it ties up the last of the loose ends.

In the midst of all this, who should show up but Hex’s Dad. He starts to apologize to Salazar, who tells him there’s no need, and Hex starts showing him around. After a little time, Hex comes back and apologizes himself to Salazar. And then there is an absolutely sweet ending with Agnes.

The more I read of Wizard Beach, the more it grew on me. It’s a cute little coming of age story that takes full advantage of its wacky characters and the craziness of the setting.

FUN IN THE SUN

Wizard Beach #5 continues to delight with its art, which is just full of small details. I like the parallels in Hex’s homeland – it looks like a completely different place with the changes from winter to summer, but some things never change, like the mobs of wizards and strange creatures battling. It is amusing that they’re now fighting mosquitoes.

I like the change in Hex. When we first see him, it is plain that he, whether he realizes it yet or not, has brought some of the beach back with him to his homelands. He looks so relaxed and informal, even tanned, compared with how stiff and stuffy he was at the start. We see a lot of emotion cross his face when he talks with his father again, when he realizes there is more to life than constant conflict.

And it’s so fun getting back to Wizard Beach again. There is always so much going on in the background, and with different camera angles, we get to see it from several sides. I think that practically every character we’ve seen manages to come back in this issue, and we find out just enough about what they were doing that what once seemed random now retroactively ties in with the plot.

BOTTOM LINE: AN ENTERTAINING SUMMER VACATION OF A STORY

The flavor of Wizard Beach #5 is very much like a summer vacation. It’s fun; it’s satisfying; it has a sweet ending that is just delightful. It’s no wonder there are several wizards who’ve chosen to live at Wizard Beach. It’s a crazy place, but you could do a lot worse.

The flavor of Wizard Beach #5 is very much like a summer vacation. It’s fun; it’s satisfying; it has a sweet ending that is just delightful.