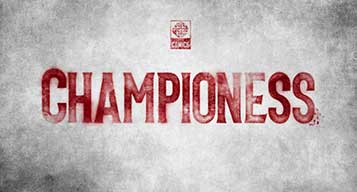 Legendary Comics is still alive and kicking and in the fall of 2020, we should be on the lookout for Championess from Tarun Shanker and Kelly Zekas.

In eighteenth-century London, Elizabeth Wilkinson is struggling to make ends meet for her and her sister Tess. While Elizabeth works odd jobs at the local newspaper, her true passion is bare-kuckle boxing. The only way to make enough money off of boxing is to train with one of the famous retired boxers and the only real fight promoter of any notoriety, James Figg. Figg refuses to train Elizabeth at first because she is a woman, but she cunningly forces his hand by taking an ad in the newspaper and claiming that she will fight another female bare-knuckle boxer as Figg’s pupil. As Elizabeth trains with Figg and James Stokes, she is forced to come to terms with her half-Indian side and her criminal father as she faces the powerful female bare-knuckle boxers of her day.

“When Tarun and Kelly first pitched me Championess, I loved that it was based on a true story and explored the life of a female bare-knuckle boxer in the 18th Century,” said Nikita Kannekanti, Editor of Legendary Comics. “It’s such a unique premise, and I had no idea women boxing was a thing back then! I have wanted to bring an incredibly strong, passionate female character to life in an original graphic novel, and the story Tarun and Kelly have created based on Elizabeth Wilkinson is the perfect opportunity.”

“There isn’t much known about Elizabeth Wilkinson, but when we first heard her story, our imaginations went wild as we hung on every detail, from her larger-than-life personality to the way she helped popularize the sport of boxing in its earliest, most brutal days,” said Shanker and Zekas. “We’re so excited to be working with Legendary to tell her remarkable story and explore this fascinating corner of history.”