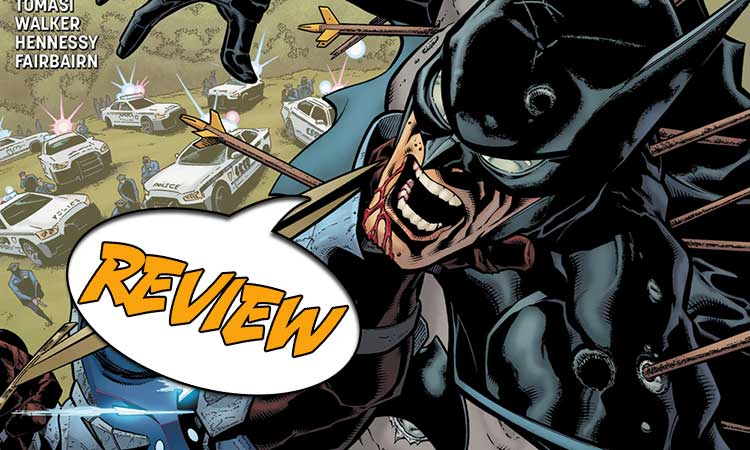 The Dark Knights face off in a steady as she goes issue that presents excellent artwork and a decent storyline. Mystery piles on mystery, while Damian flings himself into danger. Great artwork carry the larger burden of a story slowly unfolding before our eyes.

Peppered with arrows, trapped under the boot of a fearsome new foe and surrounded by police packing heat and onlookers with camera-phones, it seems the Arkham Knight has Batman where he wants him.  Does he?  Find out in our Major Spoilers review of Detective Comics #1002! Previously in Detective Comics: The deaths of bats across Gotham City began a new arc after the celebrations of Detective Comics #1000.  Lured into the light, Batman is brought down by the Arkham Knight and his allies.  Seemingly defeated, will Batman be able to rise once again and solve the mystery of Gotham’s latest threat?

Your reviewer really got into Batman only in the mid-90s when he worked at a comic book store.  These were the days of Norm Breyfogle (sadly missed) and Jim Aparo, two legends in the long Batman canon.  It’s particularly apt that Aparo is memorialized as the name of Gotham’s Aparo Bay, while the artwork in Detective Comics #1002 is reminiscent of Breyfogle’s iconic work.

Detective Comics #1002 picks up right where its predecessor left off, with Batman peppered with arrows, and the Arkham Knight grinding his face into the dirt.  Around them, the Knight’s armored allies face off against a contingent of police, while Batman struggles to rise.

Detective Comics #1002 is an enjoyable, if scant issue.  The artwork is the standout, with Brad Walker’s pencils brought to life by the firm inking of Andrew Hennessy.  Indeed, the early portions of the issue are dialogue-free, as the art powerfully displays the tension of the standoff between masked vigilantes and the police.  It brings palpable tension and atmosphere the latter portions of the issue lack.

At this stage in the Medieval storyline, writer Peter Tomasi is assembling his pieces onto the board.  With the events of the previous issue designed to gain Batman’s attention and lure him out into the open, Detective Comics #1002 feels very much like the opening bout in a much longer match designed to have a crashing finale off into the narrative distance.  As a result, while there are some very good set pieces, not a great deal happens.  Faithful listeners of the Major Spoilers podcast will have heard Stephen and the other hosts talk longingly of the day the big comics companies decide to abandon monthly (or in this case, fortnightly) issues for a steady release of graphic novels.  Something like the Medieval arc makes their case, convincingly.  As with the best soap operas, issues like Detective Comics #1002 inch the story along, never totally resolving everything, but giving you enough to come back to the next issue in the hope of just a little bit more.  But in this day and age, is this the right approach?

Still, for all that, we have some amusing quips from Alfred as he (yet again) patches up Bruce Wayne, and a very tense underwater struggle later in the issue when Damian Wayne goes on an unauthorized solo mission.  It just feels like the main thrust of the arc isn’t pushed forward as much as it could.  It’s only early days and undoubtedly there’s far more to come.

Just to circle around back to the art, looking over it as I write this review, I’m stunned at how good it is.  The art, and the coloring, are top notch, never better evidenced than the scenes where Damian makes his escape.  The contrasting darkness and light, the red/orange tones are really entrancing, and even if Damian is a mouthy little $^%!, it does bring out his tenacity and skills.  The design for the Arkham Knight is a little busy, for me, with a number of different elements competing for attention, but there’s no doubting his imposing nature, ably realized by the artwork.

BOTTOM LINE: STEADY AS SHE GOES

Detective Comics #1002 gives the constant Batman reader exactly what they want.  Great action, some nice moments of characterization (the panels where Jim Gordon helps a wounded Batman escape the Arkham Night, and those between Alfred and Bruce Wayne are cases in point) and a new (old) villain presenting a fresh mystery to solve.  It doesn’t try to extend itself too much, but neither does it simply sit pat and do nothing.