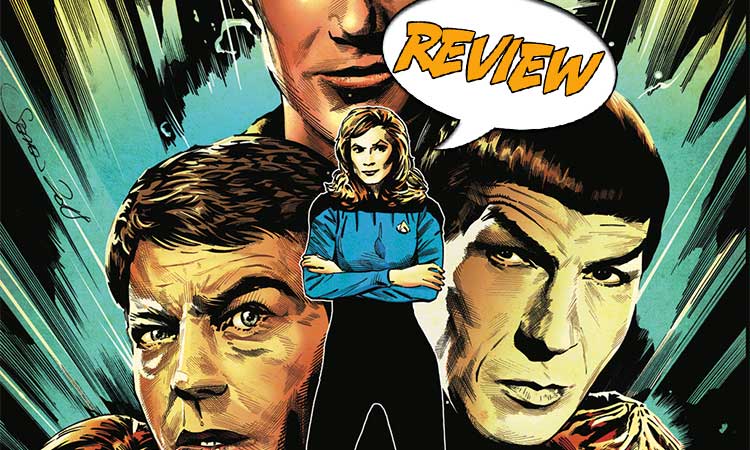 This week IDW Publishing releases a one-shot Star Trek anthology entitled, STAR TREK: WAYP POINT. As the name implies, the stories are little stops along the journeys of some of the most beloved characters in fiction. Is it worth checking out? Previously in STAR TREK: Star Trek has been a phenomenon almost since its inception from the mind of luminary Gene Roddenberry. More than stories of space battles and alien dynasties, Star Trek has been a medium for social commentary since it first graced the airwaves in 1966, a tradition which has continued into all of its incarnations, including comics. After a myriad of publishers, IDW Publishing has been in charge of the most recent entries into Star Trek’s four-color heritage.

Picking up the title and mission of a previous IDW publication, STAR TREK: WAYPOINT contains a series of short stories set among the crews of four different ships and series. These are stand-alone tales requiring only the most basic knowledge of their subjects and therefore they are perfect for the casual reader. At the same time, they reveal much about the cast involved, so the most diehard fan will find something to enjoy as well. Of the four stories featured in this title, I really found two of them to be stand out and want to focus my review efforts on them.

In the first story, we find the good doctor Leonard “Bones” McCoy with a troubling predicament. As the Chief Medical Officer for the USS Enterprise, he has to deal with not only his own crew’s illnesses, injuries and general woes, but also any that may come up in the course of the daily travels of the Enterprise. He often puts on the visage of a regular “country doctor” and issues his own brand of easygoing sarcasm along with homespun wisdom and solid medical advice. His skill with medical instruments is rivaled only by his skills with his wit. So what happens when that wit fails him and as he comes up against the one thing his medical knowledge cannot cure, love? He may be able to dole out advice with a crooked smile and sarcastic chuckle, but can he take his own medicine when he is the one with an illness of the romantic persuasion? How will he handle it when the focus of his amorous feelings is not even human? Worse yet, how will he handle it when the object of his desire is a Vulcan?

Then, in “The First Year”, we find Ambassador Worf as he attends to his duties serving the Klingon Empire. He has matters which to attend to and declares is not seeing anyone that day. But when an old friend in the form of Ezri Dax appears, how can he say no? When she reminds him that it has been one Klingon year since the death of his wife, and Dax’s former host Jadzia, he cannot refuse. As if he needed to be reminded of the day. He has duties which must be attended to, whether the Starfleet counselor follows him or not. Ezria is there with a purpose, and old wounds must be opened and lies faced if Work is to ever find the fulfillment which left him so long ago.

The remaining two stories deal with partnerships. In the Next Generation story, the unlikely team of Dr, Crusher and Lt. Yar are thrown together as they investigate mass amnesia and missing crew aboard a cargo vessel. In “The Swift Spoke” Second Officer Kathryn Janeway and Security Officer Tuvok conduct a first contact mission as the USS Billings is contacted to meet with the people of Aralia-Prime. Cultural differences are the least of their worries as they encounter an entirely new phenomenon. Will this first contact be their last?

SET A COURSE FOR AWESOME

Stephen Mooney his tale of the original series wonderfully. The Original Series has wonderful pacing. It reads and feels as if it were an original episode. He managed to relay the voices perfectly and the dialogue they speak evokes the sound of these iconic characters wonderfully. I can hear not only the dripping sarcasm of Doctor McCoy, but the calculated words of Spock and the casual tone of Kirk. It feels right, and is possibly one of my favorite Star Trek stories in years. Mooney also provides the artwork and delivers a wonderful job with the likenesses of the crew, capturing their expressions manners to a T.

In “THE FIRST YEAR”, Thom Zahler shows us a part of the Star Trek Universe that may have seemed closed. They open up this tale of mourning and remembrance and give Worf some of the closure the television series seemed to have skipped around. I really want to commend Andy Price; not only is the art solid and well executed, there are some breathtaking panels here that just show the versatility of the medium.

The remaining stories, pre-Voyager story of the USS Billings by Matt Sheean and Malachi Ward, as well as the Next Generation short by Corinna Bechko and Daniel Irizarri, are also excellent and could easily have been full television episodes.

If you have read my reviews for any real length of time, chances are you know that I have a deep-seated love for anthologies. The anthology format provides such an opportunity to explore ideas and events in a visual short story format, and they are great for little bits of entertainment. At the same time, the shortened format is difficult for some writers to master, as you have to get a lot of story into an abbreviated number of pages without making it a huge info dump. With STAR TREK: WAYPOINT, the writers are generally successful in accomplishing this. The stories are entertaining and fun, and at the same time self-contained and complete. The artist capture the likenesses of the characters, while at the same time staying true to their own style.

STAR TREK: WAYPOINT ONE-SHOT is an entertaining entry into the logs of Star Trek fiction, and you would do well to beam yourself a copy into your hold box.