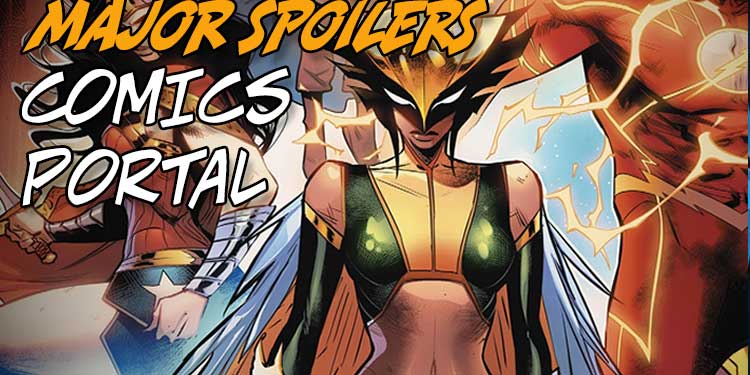 There’s an important celebration taking place this week that you might not know about. April 25 is Hawkgirl Day, and fans are showing their love for the character in many ways—YouTube videos, illustrations and fun facts.

Hawkgirl is important to the comics industry in several ways, so I’ll elaborate in celebration of her day!

HAWKGIRL BEHIND THE SCENES

One of the places that supports Hawkgirl on the Internet is a group called Hawkworld, which is managed by Tim Board. He recently had a birthday of his own, so I hope it was a happy one.

Tim explains why April 25th is her big day on that very blog:

Seventy-seven years ago, on April 25, 1941, Shiera Sanders flew for the first time as Hawkgirl, beginning a long career. She was considered a sort of sidekick for Hawkman at first, but over the years she has taken her own place as a popular character in the comics and on the TV cartoon shows, and she is now one of the most recognizable heroines in comics today. From Shiera Saunders to Shayera Thal to Kendra Saunders, Hawkgirl has left her mark in DC Comics no matter which identity she has been given. Kendra Saunders made a big comeback in the recent Metal series by Scott Snyder and will be taking her rightful place in the new Justice League comic.

Shiera Sanders made her debut on November 10, 1939 along with Carter Hall, Hawkman in Flash Comics No. 1 (cover date January 1940), but she did not appear as Hawkgirl until All-Star Comics No. 5 (cover date June 1941). We celebrate April 25th as her anniversary since that is the official release date of the comic.

Because her abilities are so close to Carter Hall’s, Hawkgirl had a tough time standing out on her own. Eventually, though, she has become her own hero, and that’s been good for the industry as well as fans of all stripes. Maybe it was just the era in which I was reading comics, but I used to think it was a good thing to call a female a “girl.” I thought it meant she looked young and appealing, for example. But the first heroine I saw who wanted to be called a “woman” was Shayera Thal.

I remember being surprised at it since I thought it was a compliment. But what did I know? I had to adjust my thinking on that, and it was because of Hawkwoman.

Granted, many heroines took on that moniker, including Invisible Woman, for example. But Shayera’s renaming struck me, so it changed my perspective. That’s saying something, a comic influencing my perception of the world.

Now, it’s important to point out that there were “woman” heroes before Hawkwoman. Batwoman immediately jumps to mind, and she was around in the 50s. But she was the first to rename herself that way that I encountered.

It interests me that using the name “Hawkwoman” has only been a temporary thing. When Hawkgirl took over the Hawkman title, she was indeed Hawkgirl. She uses the “girl” name when she’s younger in the DCU, and that’s fine. I think the point was well made when she made that change, and it still holds true.

DO FEMALE VERSIONS OF HEROES ALWAYS HAVE TO BE SIDEKICKS? It always fascinates me when I see sidekicks being female to a male lead. And it often means there are, shall we say, romantic overtones to such interactions. The Green Hornet and the female Kato are good recent examples of this, I believe.

I also notice that female heroes rarely, if ever, have male sidekicks in comics. The closest thing to that is Wonder Woman and Steve Trevor. He’s often in the more “sidekick” role, and he’s a rare example of that. It’s intriguing that Batwoman had Bat-Girl as a sidekick, but female leads/male sidekicks are rare things in comics.

I think our society has been changing over the decades, and women are evolving in our perception of how they function with men. Hawkgirl was, for me, an early example of that taking place. In the comics, she “grew up,” as one friend has put it, before our eyes, taking our perceptions with her.

It’s also been true that seeing a former “sidekick” take on a lead role has been enlightening. For instance, we see Hawkgirl in the Justice League currently while Carter Hall has his own title. That’s quite a step up from when she was granted a lower status until they made her a full member of the JLA.

I remember seeing the line-up for the Justice League animated series. Having Hawkgirl without Hawkman was a little unsettling to me at that point. But she was a character who could have a romance with Green Lantern/John Stewart, could be stronger and more aggressive than many of her teammates, and she should also be a traitor, which surprised me like crazy!

She was a vital character in that show, and her ability to achieve a lot of redemption was also very eye-opening to me.

HAWKGIRL AND THE COMICS INDUSTRY

I’m one of those fans of the comics industry who can glom onto a “secondary” or “minor” character very strongly. Hawkgirl has been one of those heroes.

Her growth as a character has been instructive as well as inspiring, I think. She’s been “new” in many ways, and that’s helped her become, on some levels, more popular than her male counterpart.

On my podcast, I often talk about some female friends of mine who believe a lead woman must be maternal in nature, not resorting to violence, but instead talking through problems. I really feel that’s very limiting to a character. After all, men can be scoundrels and scientists, villains and heroes, doctors and numbskulls. Women in real life have just as much of a variety, and I think Hawkgirl has really opened the eyes of some of us fans to what women can be and often are in the real world. Like the new Doctor in Doctor Who, she shows that a woman can be just as engaging as a man in a lead role in great storytelling.

In fact, I’d like to see Hawkgirl get her own title again while you keep Hawkman going. What do you say, DC?

What do you think? Is Hawkgirl an example of what you like to see in a comics character? Has she helped change your perspective because of who she is and what she does? Whatever your opinions, please be sure to share them in the space below! And have a Happy Hawkgirl Day!