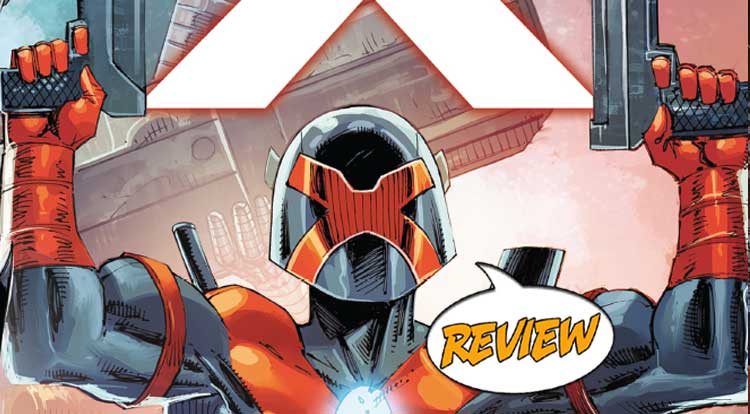 Once again a mysterious player from the future has arrived to shake up the X-Men’s status quo…  but who IS he?  Your Major Spoilers review of Major X #2 awaits! Previously in Major X:  The X-Istence was a world of peace and prosperity for mutantkind, a haven like none they’d known before.  But when the creator, The X-ential, disappears, the world begins to crumble around its inhabitants.  Major X, aka Alexander Summers manages to travel back in time before their world was destroyed, teaming up with his father, Cable and the X-Force in the hopes of saving his future utopia.

THE HISTORY OF THE FUTURE

This issue begins with an extended explanation of the origins of The X-Istence, the future settlement of Atlanteans and Mutants established when an undefined terrible war consumed the future.  We see a couple of moments with Sentinels fighting one another and a sequence very reminiscent of ‘X3’ before the X-ential (which I have no idea how to pronounce) teleports a group away to a hidden paradise.  Once in their new home, the survivors built their own society, using their gifts to forge a perfect little world.  Sadly, Nomar (who is implied to be the son of Namor and whose name makes me incredibly angry every time I think about it) betrays the mutants, leading to Major X’s desperate leap into the past.  We find that he has been explaining all of this to Wolverine and Cable, leading Cable to throw his lot in with his son to find a way to save the future.  It’s unclear what this might entail, though, as they make their way to Cable’s undersea base, Greymalkin.   They’re immediately attacked by a trio of Atlantean mutants called SURF, whom I think were last seen during the ‘Atlantis Attacks’ crossover of ’89.  Using clever strategies like “a gun on the highest possible setting” and “Cable’s cybernetic arm on the highest possible setting”, the duo fights off the Atlanteans, only for Greymalkin to EXPLODE!!!

BECAUSE NO ONE DEMANDED IT: THE RETURN OF SURF!

I’m having some troubles with this issue, not the least of which is the recent death of the older version of Cable seen in this comic at the hands of his own younger self.  That’s not a deal-breaker in itself, but there’s no real stakes to this story because I have NO idea what it is they’re actually doing.  Wolverine actually questions Cable about this during the issue and rather than try to give readers some information, the writer instead chooses to let Cable be mysterious and spout some patented Clint Eastwood-style dialogue.  It might help to build his mystique, but it’s infuriating to read.  The battle with SURF (whose battle cry of “SURF’S UP!” is just as ridiculous now as it was back in 1989) is a nonsensical thing full of slogan shouting and silliness.  Major X’s brilliant plan of “Turn the gun up to eleven” is really dumb, but it’s made even moreso by the fact that he got the strategy from Cable’s future genius super-computer.  As for the art, I’m glad that Peeples and Hanna are handling the visuals rather than the writer, but there is an overt attempt to capture some of the hallmarks of Liefeld’s style in the designs and figure work, which makes sense in a book clearly aimed at his fans.  What comes out is thus a mishmash of pseudo-Rob and generic 90s X-book, with bland costume designs, indistinguishable faces and facial expressions and a truly ridiculous helmet for our hero.

BOTTOM LINE: THIS… IS NOT GOOD

In short, if you’ve had a hankering for some 90s-style excess in the vein of ‘X-Force’ or ‘The X-tinction Agenda’, this book might be for you, presuming you’re not bothered by a lack of detail in the story and a general inability to generate any really effective drama.  Major X #2 is a blast from a past era that I personally don’t miss, with a story that cobbles together Cable’s backstory, ‘Days of Future Past’ and just a soupcon of ‘Logan’s Run’ into an overly familiar slog, with art that I feel might be better if they weren’t aping another creator, earning 1.5 out of 5 stars overall.  If you’re a super-fan of Rob Liefeld’s work, this is a book for you.  If you’re not, then I’d steer clear.

A lot of very familiar world-building, combined with endless tough guy dialogue and a big nonsensical fighty-fighty makes for one dull comic book.