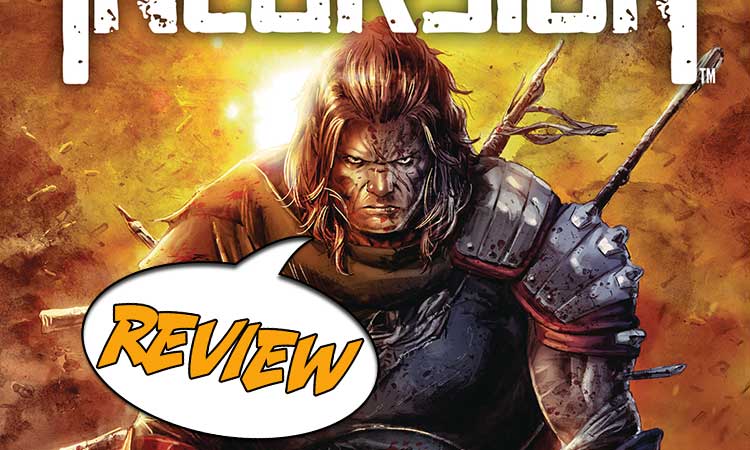 Imperatrix Virago has invaded Earth, and Gilad has infiltrated Virago’s keep to find Syntilla. With all life on Earth hanging in the balance, who will succeed? Take the jump for our review of Incursion #3 from Valiant Entertainment. Previously in Incursion: Tama (Earth’s Geomancer) is dying and is in the hands of Dr. Mirage and Hwen, who are also holding open a door to the Deadside. Gilad, the Eternal Warrior and Tama’s protector has gone into the Deadside. Imperatrix Virago’s companion Syntilla, who infected Tama, is there. She may be able to heal her, and Gilad is going to try to persuade her. He fights his way to the fortress and finds Syntilla, who is sleeping.

Incursion #3 opens on Earth, where we get the news headlines as to what is happening. “An invasion of the undead,” won’t necessarily fly, and I am amused by the CDC’s insistence that the attacks are by “mobs of rabies-infected individuals.” At any rate, there are crop failures and marauding attackers worldwide. And in Los Angeles, the attackers are within range to sense Tama’s presence.

Virago is under time pressure as well – her health is failing; her vision blurs. When some of her guards bring in a body, she is impatient that it be Tama, but it is merely another one of her men, who warns her that Gilad is in her keep. She orders her own biggest warrior, Kotila, to go to Syntilla’s chamber and kill anything that shouldn’t be there.

And Gilad is there, talking to Syntilla, asking her to help heal Tama. We finally learn more about her. Her very touch liberates necromantic energy from living things, and she can channel it to the Imperatrix. As a child, she could not control this, and ended up destroying her entire world, except for the warrior who became the Imperatrix. The more I think about it, the more I am intrigued by the parallel between Tama/Gilad and Syntilla/Virago. Is Syntilla essentially an anti-geomancer? And instead of protecting her at all costs, Virago uses her for her own selfish ends? I think Gilad sees this. He tries to reason with Syntilla and inform her that she is a slave. But Syntilla’s power is dangerous, and even as it is the key to her survival, it is destroying her emotionally. Kotila arrives, but Gilad has already left. Back on Earth, Dr. Mirage is doing all she can to keep Tama alive as Hwen holds the portal open.

In the open wastelands of the Deadside, Gilad goes looking for the demon he met earlier. But first he is accosted by another dead creature. After they battle, the demon appears, the one who claimed he could heal Tama. Is there a bargain in the works?

On Earth, Virago’s forces have reached Dr. Mirage’s house and she holds them off. One of them though, in the throes of death, offers himself to Imperatrix Virago as a bridge – and she comes to take Tama herself.

THE DEADSIDE IS NOT A NICE PLACE

I love the contrasts in the artwork in Incursion #3. The style has a light touch that looks like pencils and watercolor – no bold ink lines or brilliant colors. It gives everything a somewhat muted, almost dreamlike feel. The play of light against shadow looks as though there is a bit of haze in the air, scattering the light.

It sounds beautiful, and it truly is, except that this is a book that is all about death, and there is a lot of dying and a lot of blood. That stark contrast brings this to the forefront. The Deadside is not a nice place. Most of the denizens there are dead already; they have literally nothing to lose in a fight, and it is horrific that they still survive even with major chunks of their bodies hacked off. To be fair, hack off some of the useful bits and it will slow them down for a while. Gilad has to use this in his fighting, and he does so in a grandly gruesome fashion. It is as satisfying as it is horrifying.