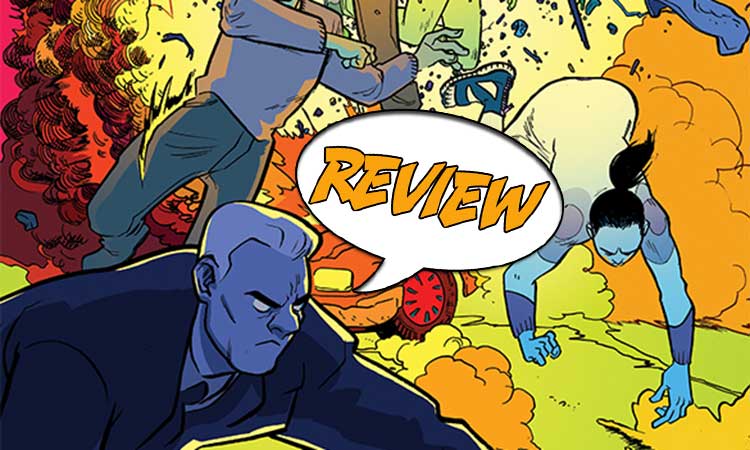 Through a series of unfortunate events, the world’s top twenty assassins have been reduced to seven.  Now, with their employer Rankin in need of protection, he hires them all as his personal bodyguards.  But can the greatest killers in the world save their boss from a tenacious adversary?…Find out in our Major Spoilers review of Assassin Nation #2! Previously in Assassin Nation: The former greatest hitman in the world, Rankin, is now the head of a crime organisation.  After a gathering of the top twenty hitmen is reduced in the bloody opening issue, those who remain are rapidly hired to protect him.  But can they?  And who will survive to the end of Assassin Nation #2?

Assassin Nation #2 leans even harder into the funny than the opening issue.  As with all scattergun comedy, sometimes it hits, and sometimes it misses (unlike all the hitmen in this issue).  When the opening lines are, ‘I came here to do two things:  get kills and make dollar bills’ you know there’s plenty of fun to be had in this issue.  It’s a fun, satirical issue that never takes itself too seriously, and should bring a smile to even the most jaded reader.

Rankin brought together the greatest hitmen operating in the world, and watched most of them get offed in an explosive opening issue.  Helpfully, there’s a chart at the start of the issue outlining the names and faces of the survivors.  Amusingly, they have all raced up to near the top of the charts, through no effort by themselves, other than surviving the mass slaughter in issue 1.

Assassin Nation #2 works because it doesn’t take itself too seriously.  Granted, it does have more than enough depictions of violent murder and mayhem, but Henderson’s art leans less to the realism and more to the cartoonish, lessening the effect of all that killing.  In fact, playing up some of the more absurd killings (the man who beats dogs ends up under a boulder) are played straight for laughs, hiding the more disturbing elements under humour.

Bishop is the lead character, a gay, no-nonsense black man who seems faintly appalled by the line of work he has fallen into.  Surrounding him are the survivors, with the  clear favourites of writer Kyle Starks being normcore Dave, and Fingerman, a rambunctious, over the top arrogant monster who tells it how he sees it, and is all the funnier for his fulminations.

IT’S ALL IN THE PUNCHLINE

Erica Henderson takes on the artistic duties in Assassin Nation #2.  Thankfully for her, with the thinning of the ranks at the end of the previous issue, she has a smaller cast of characters to depict.  The table at the front of the issue helps the reader, as does her excellent work in depicting each character individually.  Henderson has put a lot of effort into depicting these characters, and there’s no sense she is half-inching the look of each person.  There’s a vaguely cartoonish vibe to the look of the issue, which as I mentioned before tends to lessen the sense of atrocity that each violent act inflicts on the characters and their surroundings.  The art matches the writing; if it didn’t it would work against the humorous intent.

There’s a really good sequence where Henderson lays out several origin stories, using a half page for each character, with a slightly different panel layout, to tell effectively the same story of violence.  Another effective scene shows Smoke taking up Fingerman’s offer to dare to mock him one more time.  The speed of his weapon being drawn is ably shown as she enunciates the word ‘you’, finishing with the gun planted firmly in her face.

Aside from the levity, there’s time for some action at the end as drone attack on the group leads to yet more deaths, an origin story as one of the killer’s life passing them by as they prepare to die, and an intent to take the attack up to those who have been launching the attempts on Rankin’s life.  It’s an effective, funny sequence that augurs well for future issues.

Loaded with lots of funny one-liners and great confrontations, Assassin Nation #2 is a fun ride that never lets up.  Whether it’s the hatchet job Fingerman is itching to perform on those around him, or the relentless normality of Dave, this issue is full of great characters letting rip to the amusement of the readers.  The violence is never too over the top to undercut the humour, and Starks and Henderson are a great pairing.  Here’s too many more issues!

Action and laughs at a rapid-fire rate. Assassin Nation #2 picks up the ball from issue 1, and races for the end zone, filling its pages with relentless action and enough one-liners to keep you chuckling long after you finish the issue.