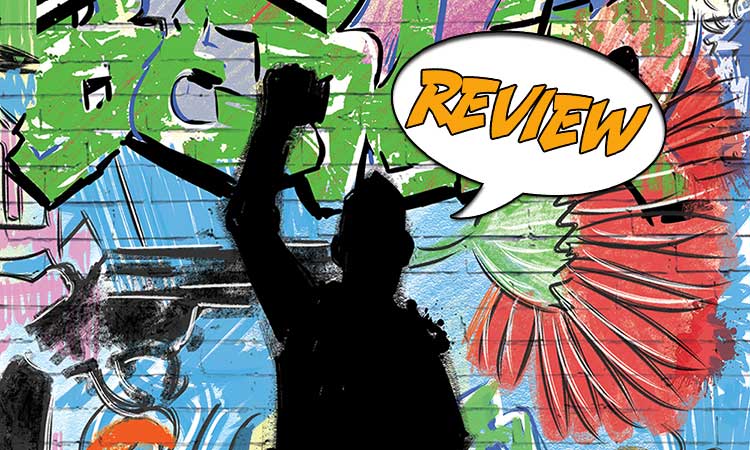 A fast-moving tale of kids in peril, no matter how highly trained, Black Badge #9 looks back and forward, deepening the mystery while introducing new elements that will no doubt fuel further storylines.

In the wake of winning the Jamboree, a competition between similar kid-friendly spy organizations, the Black Badge’s well-deserved R & R is disrupted in astonishing fashion. Now, in Black Badge #9, can the team find out was has happened to them? And where is Willy? Find out in our Major Spoilers review of Black Badge #9! Previously in Black Badge: The Black Badges are a group of children who are trained spies, masquerading as a band of scouts to infiltrate where no adults can reasonably go. After a sojourn in Pakistan, and surviving the rigors of the Jamboree, the Black Badges faced a cliffhanger in issue 8. Now, Black Badge #9 flashes back three decades, before returning to the group, who have no memory of where they are…

I really enjoyed this book. The flashback at the start to an incident in 1985 ticks all my boxes in terms of the Cold War and the 1980s. You millennials have no real idea of the existential dread that hung over us during that decade, particularly those of us who were teenagers. Shows like The Day After or the UK nuclear horror Threads, ably demonstrated that with the adults (a failing Reagan and a series of near-corpses ruling from the Kremlin) in charge, we were one mistake away from destroying humanity once and for all. Looking back, it’s a crazy sort of nostalgia, but Black Badge #9 manages to tap into it very well.

This earlier group of Black Badges manages to extricate a German professor from East Berlin, through a series of contrivances that would make MacGyver blush to see. Nevertheless, each of the participants – two boys and a girl is each given a chance to shine, demonstrating their skills and allowing writer Matt Kindt the chance to display his kinetic writing skills.

Afterwards, we return to the present day, where the heroes of the series awaken in a place they don’t recognize, run by people they don’t know, and unable to remember where Willy is. Nonetheless, their skills kick in, and they launch a desperate shot at freedom.

Throughout Black Badge #9, there’s a sense of waiting for something to explode. The imagery of a grenade that opens and closes the issue is a testament to that, even though events move at a low range rumble. The portion of the story in East Berlin is the highlight of the issue, its mix of confident bravado with the realization that this is children dicing with death creating a neat frisson of expectation. Kindt’s sparse writing with Jenkin’s almost thumbnail illustrative style pushes the story along and even though we might be eager to return to the present day, the events here are so compelling it never feels like filler material. In the world of Black Badge, everything means something.

The latter half of the story further develops the underlying mythos of the series. There’s a strong The Prisoner vibe, as our heroes come to in an unknown village of interesting architecture, monitored by a device that curtails their freedom. Their memories suspect, the trio, who only later wonder at Willy’s absence, make a break for freedom in the best traditions of that venerable 60s series’ mix of a paranoid spy thriller. And like The Prisoner, the ending is very bleak indeed. Kindt’s nod to the past demonstrates his understanding of the form and that while spy thrills and spills have limited entertainment value, it is the real world impact of high-level machinations that have the greatest effect on our protagonists.

Kindt and Jenkins bring the goods once again, in a tersely told, tense issue that moves the story along while introducing new elements that deepen the storyline. There’s a neat contrast between the two trios depicted in this story – the former a freewheeling tale of an extraordinary escape, the latter depicting the curtailment of freedom of action and the harsh reality of a world that puts children in harm’s way.