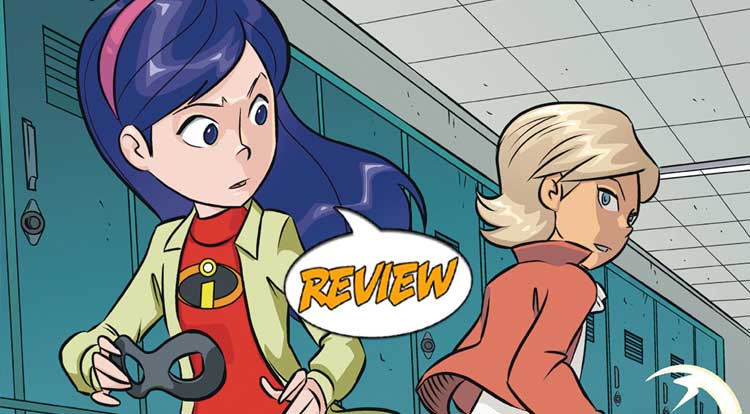 High school is never easy, but for VIolet Parr it’s even more complicated, thanks to her entire family’s super-powers.  Your Major Spoilers review of Incredibles 2: Secret Identities #1 awaits! Previously in Incredibles 2:  It’s tough being a teenager, and on top of that, a teenager with super powers!  Violet feels out of place at school and doesn’t fit in with the kids around her… until she meets another girl at school:  An outsider with powers just like her!  Is this the beginning of a beautiful friendship or are powers not the only thing her friend is keeping secret?

SOMETHING TO DO OUTSIDE OF SUPER-HEROING

We open with The Incredibles taking out the Robo-Sumo, thanks to Violet’s mastery of her force-fields, with both Mr. Incredible and Elasti-Girl complimenting her on clever use of her super-powers.  Cut immediately to school the next day, as a sleeping Violet is awakened by her teacher… who wants to see her after class.  Concerns about Violet’s attention span are about much more than falling asleep in class, but she just can’t bring herself to devote attention to middle school, seeing it as “boring and pointless.”  (I mean, she’s not wrong?)  Her parents suggest extracurricular activities to help hold her attention, leading to Violet joining the Drama Club and meeting Rose, the weird quiet kid.  When Vi discovers that Rose has powers, too, she makes the decision to share her secret, and the two of them start hanging out together.  Unfortunately, Rose is a bad influence, talking Violet into breaking into things, acting recklessly and being something of a delinquent.  When they encounter a bank being robbed, Rose talks her out of trying to stop it, leaving Violet wracked with guilt…

…and then she finds out that the bank-robber is actually Rose’s father!

PEER PRESSURE IS A REAL PAIN

This issue features some really interesting art, with Vinci working with a more traditional cartoony style rather than the 3-D animation of the movies, and it really works.  The characters are always perfectly recognizable, even with the change in tone/technique, and the range of expressions is really impressive.  Violet’s discomfort at her new friend’s daredevil antics is always clearly on the page, and the opening action sequence is really wonderful.  Best of all, Gage’s script focuses in on the teenage Parr child entirely, with only a couple of moments of parental advice from Bob and Helen, and the story is much stronger and more focused for it.  It’s nice to have the one-on-one moments, and for a character whose canonical appearances are only in two movies years apart, it’s remarkable how strong Violet’s design and character end up being.  Best of all, this issue keeps the exaggerated features and physiques of the movie, especially in the design of Bulbox/Hope’s dad, making it believable that he could threaten even the mighty Mr. Incredible.

For all the grit and violence in comics, it’s nice to get a good all-ages story once in a while, especially one that appeals to kids and adults equally.  Incredibles 2: Secret Identities #1 looks great, creates some really cool adventure-style drama out of Violet’s high-school drama and creates an interesting conflict in a very short time, earning a better than average 3.5 out of 5 stars overall.  I’d love to see similar limited series adventures for Elasti-Girl or Dash, especially if they are this well put-together.

It's fun to focus entirely on Violet rather than the ensemble, and the clean art makes every page a joy to read.