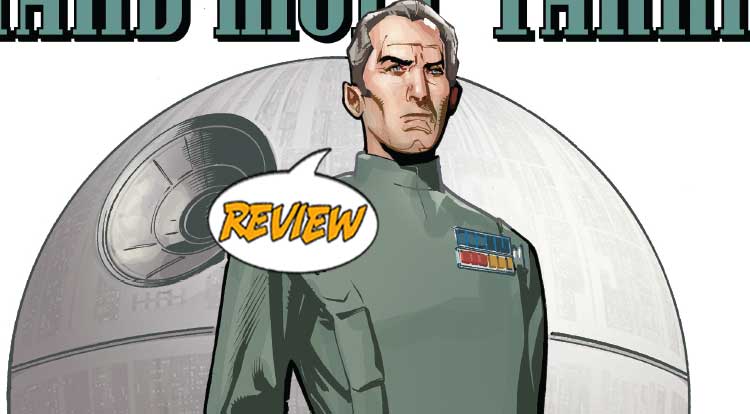 Sure, the Death Star is feared throughout the galaxy… but you should see its commander!  Your Major Spoilers review of Star Wars: Age of Rebellion – Grand Moff Tarkin #1 awaits! Previously in Star Wars: Age of Rebellion: The Empire has built the deadliest weapon the galaxy has ever seen. But even the most ruthless Imperial officer might hesitate before unleashing the Death Star’s power to kill millions in an instant. Behold the secret story of Grand Moff Tarkin, the horrors that hammered and honed his resolve, and the terrifying steps he takes to ensure that the Death Star lives up to its deadly name!

I PICKED THIS BOOK BECAUSE PETER CUSHING

This issue begins with a flashback to to Tarkin’s childhood on the distant planet Eriadu, we see a young Wilhuff Tarkin on what seems to be a spear-hunting expedition.  When he quarry gets the better of him, Tarkin cries for help, only to have his family teach him a terrible lesson: Kill or be killed.  Flash-forward to the point just before ‘A New Hope’, wherein he is running the final simulations on the Death Star, only to find that some of his gunners (apparently the station requires *168* of them working in concert to fire.)  Grand Moff Tarkin assembles them all to upbraid them, leading to a strange moment wherein he rips off his shirt and takes a blade to fight one of the hesitant guards hand-to-hand combat…  which all turns out to be a vivid hallucination.  (Also, he’s shredded like a bag of monterey jack, y’all.)  Flash-forward once more, and we witness nearly the entirety of the scene wherein Alderaan is destroyed, followed by the assembly of gunners once more, during which Tarkin reveals that he has installed devices that will let him know if any of them hesitates in the slightest…

…and then he ejects them all into space.  It’s a really shocking moment that helps to remind us why he’s nearly as feared as Vader in the first film, especially when he returns to his quarters and quietly reads as though he didn’t just murder an entire planet AND a couple dozen of his own officers.  This issue also understands that a large part of the character’s menace is the face of Peter Cushing (aka Professor Van Helsing, Baron Frankenstein and the movie version of Dr. Who, which is a long and difficult story to explain so we’ll just move on), and the likenesses are excellent throughout the issue.  Even though a large portion of this comic records a sequence in a film most of us have seen more than once, it never feels like it’s dragging or being predictable, with several big “OH HELL YEAH” moments, thanks to Pak’s excellent script.  The final page reveal that he actually has the ceremonial blade that he imagined murdering his subordinate with.

All in all, this issue succeeds in making Tarkin as terrifying as the Emperor or even Darth Vader himself in span of a few pages, making him more than just an angry man in a N*zi-inspired uniform, and making it clear why he alone was able to command the Sith lord in the original ‘Star Wars’.  Star Wars: Age of Rebellion – Grand Moff Tarkin #1 features strong art, a compelling story and fits into the movie continuity seamlessly, earning a very impressive 4 out of 5 stars overall.  If you’ve never understood what the big deal was about this relatively minor character, this is the issue for you.

If you've never been afraid of Grand Moff Tarkin, this issue will remedy that for you.