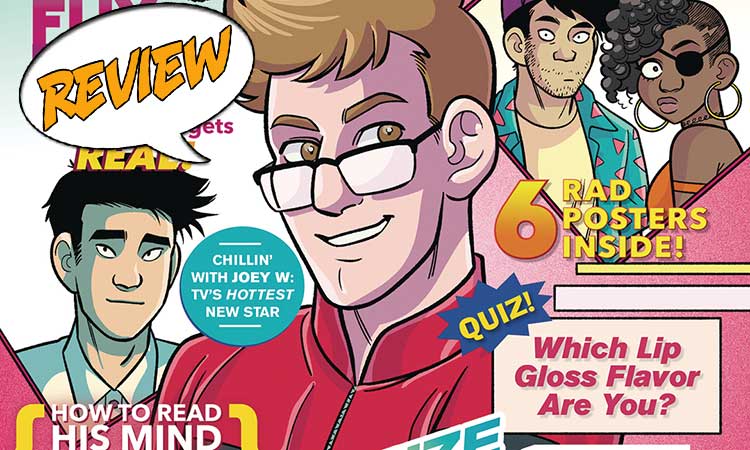 Gatekeepers and the court of continuity, oh my! Not to mention, who is the real Chip Nimitz, Flix or Rex? Check out the Major Spoilers review of The Long Con #8 from Oni Press. Previously in The Long Con: In an elaborate plot to get them into Hall F, Victor and Dez were handed off to the Skylarks as prisoners. As they reach a checkpoint, they are saved by the Battlefoxes, including Megyn (formerly a Star Hussar). And thanks to crossover events, Battlefoxes are in canon with Skylarks – although not in the eyes of the Special Guest. Apparently whatever is happening now may have its roots in the events of the past. But our heroes still need to get to Hall F, dodging the various panels that are still running, until they, with Flix Bixby in tow, run headlong into a bunch of Flix cultists.

The Long Con #8 starts out quietly this time, with a flashback to Skylarks: Quantum Redux featuring Flix as Chip trying to solve a virtually unsolvable puzzle. It’s a nice way to ease us back into the Flix cultists (who not only wears masks of his face, but know a frightening amount of stuff about him), who have tied up Flix and Dez and hauled them off to the Quantum Tribunal, a court that deals in certain Skylarks continuity disputes.

But the judge presiding is Flavia Happenstance. We saw her a few issues ago in the Skylarks writers’ room. Flix remembers her for trying to introduce more diverse midshipmen. Dez knows her from her books. (She wrote a tetralogy about “telepathic black lesbian space-angels who fight cosmic injustice and have natural hair.” I would read the heck out of that.) Anyway, Flix is on trial to establish whether he’s the real Chip or not. Dez points out that he was the only actor who played Chip. Well, there’s this new Skylarks that was being screened before the world ended…

It’s a scene that builds on the opening Skylarks scene we saw, with a twist – and with another actor playing Chip. That should settle it…but no, the cultists object. And the judge orders them thrown into the mop closet. But Dez takes the floor, quoting from one of Flavia’s first novel, in order to demand that Flix have a say. Flavia grants this and Flix comments in his inimitable style, and she has to admit it’s him. The door to the courtroom is flung open, and who should walk in but Rex – the actor who played Chip in the new Skylarks, with his army of fans. As it so happens, recasting feuds are settled by single combat, which greatly amuses me.

Dez and Flavia have the chance for a little conversation. Flavia does this once a week; most of her time is spent pitching stuff for a prequel spinoff the Special Guest is having someone put together. She’s been trying to change things, and wants to go back to her own work, but she’s stuck here. Dez confides in her with what they’re trying to do. Flavia is behind her, but Dez still has to get past the Grand Gatekeeper. Meanwhile, the single combat between Flix and Rex builds up to a resolution that is perfect, funny, and gets them out of the picture for now. Dex gets on her way, meets up with Victor and Loren, and Loren gets swept out of the picture for now too. Dez and Victor go face to face with the Grand Gatekeeper.

I just love the satire of this book. It pokes so much fun at, well, pretty much everything. Every issue has been a commentary on something, ramped up to a ridiculous extreme, and made delightful.

SO MUCH FUN TO BE HAD

One thing I have comment on about the art of The Long Con #8 is that the covers are great. They parody all sorts of different fandoms, or fan-related things and are so clever. They don’t directly reflect what’s going on inside, but once you finish the issue, you can see how the cover fits. This time we have a Teen Beat style, which is just perfect.

Again, it’s the little things that that it over the top. The Flix cultists all wear masks of him, from when he was quite young, and it’s a goofy smiling face which means it fits in with what’s happening rather weirdly, but weirdly in a good way.

I enjoyed Flavia’s and Dex’s conversation during the fight. They get popcorn – everyone here likes to watch a good fight – and as they have their serious talk, we see the occasional fist, or head, or foot show up in the periphery. And the whole dramatic take on the fight – again, delightful.

BOTTOM LINE: STILL A LOT GOING ON AT THE LONG CON

We’re at The Long Con #8, and the creative team has not run out of things to say, things to poke fun at, and wild takes on things that happen at a con. I suppose, when you think about it, there is huge potential there. I am so happy they’ve dived into this head first and taken us with them on this crazy journey.

I suppose, when you think about it, there is huge potential there. I am so happy they’ve dived into this head first and taken us with them on this crazy journey.