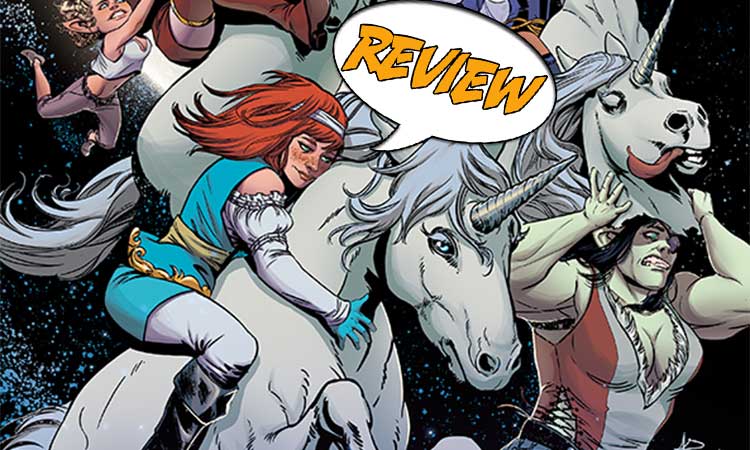 SWAMP ROMP is a great time to jump on the Rat Queen title and get a sneak preview of the new creative team.

The Rat Queen’s are in a little of a dry spell, so when an eccentric man with (part) of a unicorn comes and wants to hire them for an act of vengeance, who are they to say no? Well, they try, but beer don’t pay for itself. Find out what horrors await our favorite band of sisters in RAT QUEENS SPECIAL: SWAMP ROMP! It’s on shelves now from Image Comics. Previously in RAT QUEENS: The girls have been through a lot. Daddy issues have arisen, as have old gods, but through it all the Queen’s show they are the best at what they, well, one of the best… ok, pretty damn passable at what they do! Now they are on the skids and need a job, and are willing to take almost anything. Did I say almost?

IT WASN’T ME, IT WAS THE SWAMP GAS!

The Rat Queen’s are a little down on their luck and looking for a way to score some cash. It seems that Maestro has insisted they settle their bar tabs and that has put a major crimp in their after-hours lifestyle. So, of course, they decide to save their money in a high yield money market and take extra jobs so they can have a secure downtime and not worry financially.

Sorry, I really had a hard time writing that with a straight face. You’ve read this book before, haven’t you?

Anyway, things really are looking a little grim on the drunk side. Luckily, a man with a bag comes to offer them a job. Gossamer Hornwood may look like a decrepit old man carrying an unusually large sack… over his shoulder, but he really is rich. Really. He said so. He wants to share some of that wealth with the Rat Queens in the form of payment for a job. You see, someone killed his beloved unicorn, Chauncey. Well, killed it is a little tame. The large sack contains the head and horn of his beloved companion and he is heartbroken. He wants to hire the ladies to take revenge on the perpetrator of this horror, the Slog Chimp. Braga insists the Slog Chimp is an urban legend, but Betty, of course, insists she has met one before. Dee is intrigued, while Hannah is a little mortified. You see, her parents used the legend of the Slog Chimp to keep her in her room when they had their special, parties. Despite this all, it is decided they will take the job. Violet is all for it, as long as she gets to hang onto the remains of sweet, sweet Chauncey. Things take a turn when Violet becomes mysteriously ill in the swamp and the Queens are forced to leave her behind with Gossamer to complete their mission. Will they? With the terror of the Slog Chimp, the presence of unicorns, and being down one Queen, surely nothing can go wrong, right?

I WANT TO SEDUCE THE LOCK

Ryan Ferrier (The Fuse, Robocop: Last Stand) returns to the Rat Queens with this special and it just feels so right you might think Betty slipped you a little of her secret stash. He has constructed a great little special here that, once again, turns all the accepted fantasy conventions on their head and delivers a story that will have you on the edge of your seat or laughing aloud. Sometimes you get a writer who just understands the characters, and Ferrier not only understands each of the Queens, he contributes to their voices so seamlessly you will never have a moment of pause. These are the same rowdy and raunchy women adventurers who you have known for years, and here they are in rare form. My only concern? Braga just still does not seem to fit in. I know she has been a team member for a while but there is something about her that seems lacking. She’s like that cousin that sits in on your weekly game but never really commits. The core four are rock solid, but I always worry that Braga will be killed before she really clicks. Hopefully, that won’t happen, because at times she seems to be the voice of reason for the team.

Priscilla Petraites (New Talent Showcase 2018, Brilliant Trash) brings the artistic solidity to the adventure with consistent art and a flair for drawing you into the story. Yes, Ryan Ferrier is an awesome writer, but when you have an artist like Petraites on your creative team, you can rest assured the script will soar. Some great panels? Well, the first appearance of the Slog Chimp, as well as Violet’s encounter with the unicorns. But my favorite was probably the panel where Braga says, “Let me end you!” It was a great interpretation of Ferrier’s script.


BOTTOM LINE: A GREAT ISSUE WITH A TWIST

This issue is just plain fun. If you have enjoyed the Rat Queens adventures up to this point, rest assured that their future is in good hands. What, you didn’t hear? It seems that Ryan Ferrier, Priscilla Peraites and Marco Lesko are the new creative team starting with issue #16, and this little preview makes me look forward to the adventure.

RAT QUEENS SPECIAL: SWAMP ROMP #1 is a rip-roaring issue that will have you falling in love with the Rat Queens all over again.