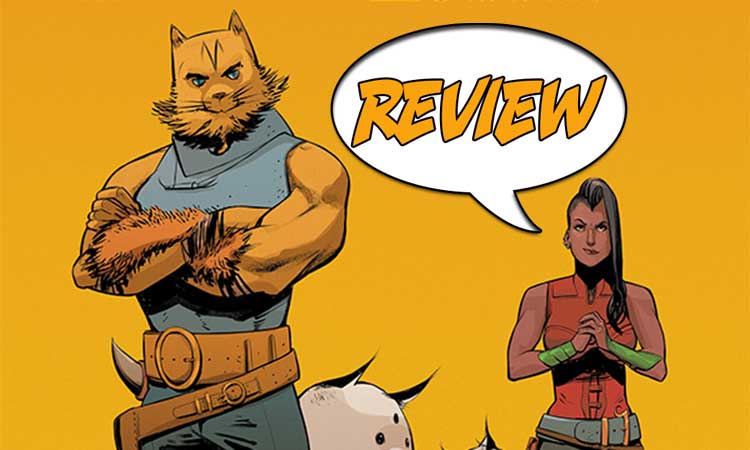 Jenner Faulds is the world’s only Fairlady – an ex-military licensed investigator in a high fantasy world. What mysteries await her? Let’s find out in our review of Fairlady #1 from Image Comics. Previously in Fairlady:  Jenner Faulds posed as a man to fight in the War of the Harshland. Now that the war is over, former soldiers struggle to re-enter society. Some of them have become licensed investigators – the first Fairmen. Among them is Jenner, the first Fairlady. She takes the cases no one else cares about.

MYSTERY AND INVESTIGATION IN A FASCINATING SETTING

I love a good detective story, and Fairlady #1 does not disappoint. I really enjoy the concept of taking the idea of an investigator and putting them to work in a place or time period where investigation (as we have come to know it) would not normally be expected to exist. The human brain is capable of deductive reasoning, and when we read a story like this, we accept that this is plausible.

The setting is a high fantasy world in the aftermath of some kind of war. Even though Jenner, our protagonist, is a woman, this is not a world where most women fight in the war, much less become investigators. This also gives the creative team an excuse to give her a variety of investigations that not every Fairman would take.

The story opens with Jenner and her partner Oanu, who is a Jessu (a feline-like humanoid) talking to an innkeeper who basically tells them to get lost and insults Oanu. Then we cut to The Feld (the town where this is set) five days earlier. Jenner and Oanu are on top of a ruined stone wall looking down at a small house, wondering if the guy who hired them to find a woman named Samanda also hired the couple guys who are in that house. Jenner confronts them – they’re a couple of lizard-like men. Samanda isn’t there, and they’re ransacking her house. Jenner gets one in a hold that lets her dislocate his arm and she sends them running and brings Oanu in.

And then, a truly nice touch, we get an idea of the kinds of things that they find in the wreckage – broken glass, framed pictures, correspondence, her journal, bad poetry, etc. We see a fragment of writing which sounds like it may come from her journal – it doesn’t quite sound like Jenner.

Jenner goes back to her client, Aken, to find out if he hired the lizard men. It turns out he did not, but we also find out that Samanda had apparently embezzled money from him. He wants his money back. As they leave, Oanu talks with her. The money makes Jenner think, and they talk to a lender she knows, named Husker. The lizard men are his men. So now there are a couple people interested in Samanda. She borrowed a lot of money from him. I do like that Jenner knows people like him. They aren’t close associates, but they know each other, and they’re willing to share some small amount of information. Investigators rely on contacts like this – no one can simply know everything on their own.

Back at their home base, Jenner and Oano look over Samada’s belongings. Nothing seems all that remarkable, but she does have a blue rock, not a gemstone, a rock. Jenner’s main job involves overseeing security in a wizard’s tower, and she takes the rock to Nejla, the wizard’s administrator. She is cranky, with some scathing dialogue to go with it, but the rock catches her attention. We get some back story about the war, the magic used in it, and an unintended blaze that killed a lot of people. The blue rock is all that remains of someone killed in that particular battle.

This information sends Jenner and Oanu to the small town where that battle took place where, with some questioning, they find themselves at the inn we saw in the opening scene. Jenner finds the missing Samanda, alone in a dark room, half naked, wearing talismans of protection. She is hiding, and she does not feel she can go back to the world she lives in. Throughout, we’ve seen small bits of writing from her journal, and seen the despair and loneliness. She lost someone in that battle, and has cracked from the stress.

There’s a satisfactory conclusion to the story. While we are promised a series, with story arcs, I think it’s great that it starts out with an entire case solved so we get a feel for the characters and how they operate. I like that Jenner is really tough when she needs to be, but she still has a human heart and some compassion, and I look forward to seeing more.

There’s an establishing shot in Fairlady #1 that tells you a lot about this world, and shows you that it is not like our own. The Feld is a village that set in and around the remains of a gargantuan humanoid construct. Parts of it are missing, but there are clearly chunks of arms and legs, and even a hand protruding from the ground. A lot of the world seems fairly low-tech, as in no electronics, but there are mechanisms, and some of the trappings of life (correspondence and pictures) seem more modern than, say, medieval. It is an interesting place.

I really like the splash of Samanda’s bungalow. The angle is looking down into the main room from the top, and potential clues are circled and labeled. To me, this says the story is a mystery first and foremost. We see this again later, as Jenner goes through Samanda’s belongings.

I also like the character and costume designs. Jenner has modern-looking, asymmetrically cut hair. She isn’t overly bulky, but she certainly looks strong. The supporting cast are equally interesting. Mr. Aken is a bit paunchy, balding, and dressed fairly plainly. Husker is considerably more dapper – vest, boots, goatee. And then there’s a guy they rough up briefly. He’s apparently the proprietor of a shop that sells talismans and potions. He’s wearing an octopus on his head. This is not something you see every day, and I love it.

BOTTOM LINE: A REMARKABLE INVESTIGATOR IN AN EQUALLY REMARKABLE WORLD

Fairlady #1 is a solid mystery with engaging characters and fascinating world building. Right out of the gate, we have a complete story, but there are plenty of places to go with story arcs. If you love a classic P.I. in a different kind of setting (and I know I do), this is a book to pick up.