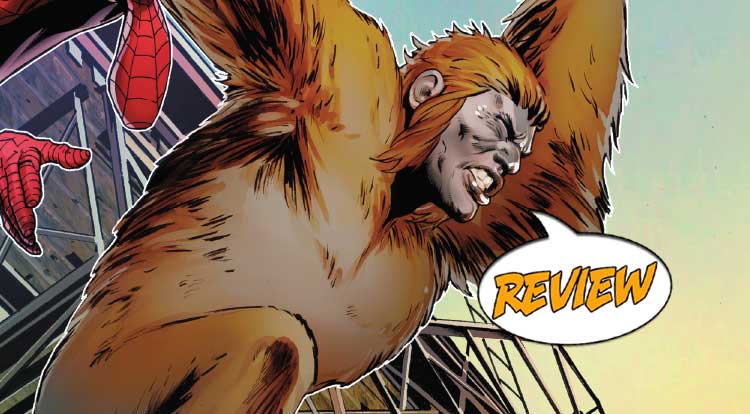 Kraven’s latest hunt is underway, and square in his sights is The Gibbon!  Your Major Spoilers review of Amazing Spider-Man #18.HU awaits! Previously in Amazing Spider-Man:  Witness Sergei Kravinoff (Kraven The Hunter) reclaim his lost glory as he and he one true heir lead the grandest hunt the modern world will ever see.  In Manhattan, millionaires and billionaires who once settled for guided sorties of the savanna will at last unshackle their predatory mastery pursuing the deadliest game: Criminals who dare claim affinity with the beasts of the wild!

REQUIEM FOR A GIBBON

With the great hunt underway, this issue is all about Marty Blank, the sorta-kinda supervillain known as The Gibbon, who has been around for a long time, but hasn’t really done a whole lot.  That makes this issue, which is literally just Marty narrating his career, so infuriating to me, with Gibbon escaping the rich idiots who want to kill him.  As part of Kraven’s plan, all animal-themed folk are fair game, and Gibbon is a particularly low-level target, so jerks with guns are swarming over him as he thinks about everything that has gone wrong in his life, mostly centered around his hatred of being laughed at.  He is eventually overcome, and brutally shot down in VERY gory detail, and ends up lying on the ground dying of a gunshot wound to the head as Spider-Man arrives.  He can’t even speak by this point, and Martin Blank passes away without ever getting to say any of the things he spent this whole issue realizing.  It’s very much a downer ending.

NOT THRILLED ABOUT THE CONFUSING NUMBERING

The first impression that I had of this issue was one of annoyance as I realized that 18.HU is actually the issue number, as I thought it was Amazing #18 when I picked it up, but that annoyance grew as I realized that the cover was a Greg Land glamour shot where Gibbon is clearly modeled facially on professional wrestler Triple H.  The story really tries to break readers’ heart with the tragic tale of the Gibbon, but it ends up fighting with itself, as Martin talks about how he hates being laughed at while Spencer’s dialogue makes it clear that the creators are kind of doing that.  Even Marty’s admission that the greatest time of his life came during the events of the awful ‘Marvel Apes’ crossover, making for an unsatisfying read.  Lashley’s art is a little bit better, but most of the issue is dark and muddy, consisting of bloody close-ups of Gibbon’s face with narration captions and with the exception of one pinup of Taskmaster in action, the art feels very scratchy and unfinished throughout the issue.

I understand what the intention with this issue was, and as it started, I felt like they might be able to pull off an emotional issue that makes us feel bad that a minor Spider-Man foe bit the dust.  Sadly, this writer wasn’t able to get the emotional beats to work, leaving Amazing Spider-Man #18.HU feel like it was mocking its protagonist and the indistinct art doesn’t help, leaving this issue with a disappointed 2 out of 5 stars overall.  Add in a truly unpleasant cover, a nonsensical numbering scheme and unmotivated blood and gore, and this is a book you can absolutely skip.

Blatant heartstring tugging works better when the story isn't working against itself, and the art is quite bland, not to mention the strange numbering making things confusing.