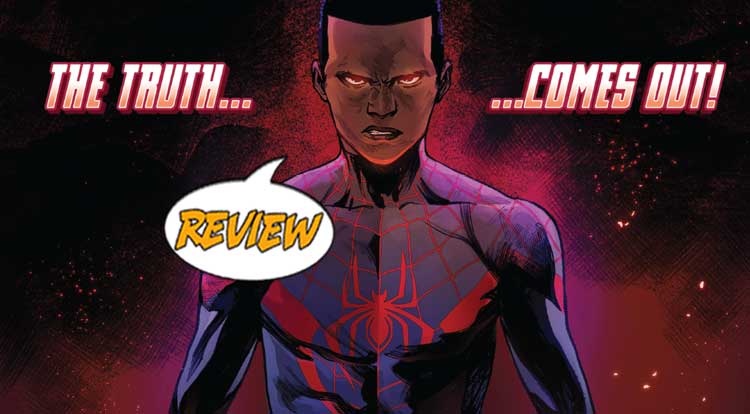 What has Miles Morales, the Ultimate Spider-Man done? And can it be fixed?  Your Major Spoilers review of Champions #4 awaits! Previously in Champions:  The Champions were on top of the world.  With Ms. Marvel as their new leader and an army of promising recruits on their side, it seemed like nothing could slow them down.  After Viv and Ms. Marvel were killed on a mission to Dubai, Spider-Man and Brawn secretly accepted a do-over from the demon Mephisto to save their friends.  It worked, but Miles couldn’t shake the memory of a girl name Faridah, whom he rescued in the first version of that fateful day.  Returning to Dubai, Miles was faced with the devastating news that Faridah didn’t survive the second time around, and now Ms. Marvel wants answers…

AN ASSASSIN AFTER NOVA

While Ms. Marvel and Spider-Man talk it out in Dubai, Sam Alexander, the hero formerly known as Nova, has to not get killed by an alien assassin while also not crashing the Champions mobile bunker into the middle of the city.  I missed an issue or two, so I’m not sure when The Falcon returned to the team or when Dust arrived, but they join Brawn, Viv and Snowguard in their attempt to save lives and their flying headquarters.  With a little help from Viv’s computer brain, the mobile bunker crashes to Earth with no casualties, but Sam is still being attacked by Kaldera, the alien assassin who has wanted to destroy him since he had his own book.  When she finds out that he has been stripped of his Black Nova helmet, she insists that he accompany her into space to get it back so she can kill him with honor.  It’s a bad idea presented by a lunatic, but one that Sam astonishingly accepts, flying off to space in the hope of getting back his powers.  In Dubai, Spider-Man reveals to Ms. Marvel what he did and how tortured he is at accidentally trading an innocent life for hers, leading to him quitting the Champions while Mephisto and his son Blackheart watch and gloat.

SPIDER-MEN SHOULD *NOT* TRUCK WITH MEPHISTO

First off, I love the idea of a really HUGE team of teen heroes, a Legion of super-types, if you will, and I appreciate how this creative team keeps characters in play after they are no longer the new hotness.  Amadeus Cho, the new Falcon, even Dust were big players during their initial stories, whose stars have somewhat faded but it’s good to see them in play here.  The back-and-forth plotting of this issue is very nicely handled, balancing Miles’ stupid decision with Sam’s stupid decision without shorting the other Champions in their time.  Cummings’ are is really well-done as well, especially when it comes to big-screen moments like the ship crashing or the battle with Kaldera.  I’m a little bit less enamored of some of his faces, but I”m not sure if it’s the pencils or heavy inking that makes some characters like wide-eyed and possessed.  I’m also not sure about Spider-Man’s mask in this issue, though I think that it’s an actual change in the eye-shape of Miles’ mask, because I wasn’t sure about it when I recently reviewed and issue of his solo series.

In short, Zub and Cummings are delivering a strong book with some very entertaining use of characters who deserve the spotlight, and you should really be checking this book out if you fondly remember books like ‘New Warriors’, ‘Legion of Super-Heroes’ or ‘Young Heroes In Love.’  Champions #4 deepens the drama, puts the devil in the mix and makes it all a gripping read, with art that gets the job done when it counts, earning 4 out of 5 stars overall.  I would like to see an issue where the entire Champions army comes into play, especially my fave-rave, The Locust, but that’s probably a big arc-ending moment.

Love the cast, love the slow-burn drama, love the teenage angst. The art is mostly good, with the occasional wobbly moment in facial expressions, but the total package is well worth the price tag.