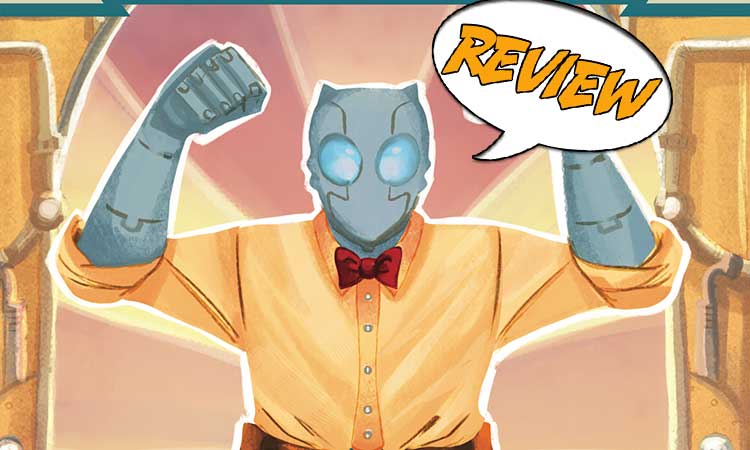 Robo’s work on Alan is secret no longer, and Jenkins turns his focus on the new interns. Who has it worse? Let’s find out in Atomic Robo: Dawn of a New Era #4 from IDW Publishing. Previously in Atomic Robo: Dawn of a New Era: Bernard is lost in the lava tubes and finding more crystal shards than he expected. But that’s not all, as he reaches apparently into the rock and pulls Princess Nequa to safety. And he can communicate with her. At Los Alamos, Vik and Lang battle vampires and they run into Jenkins, who has found out that the Earth is under siege by the vampire dimensions. This sounds like a job for Tesladyne, if only they had the resources to do it.

Atomic Robo: Dawn of a New Era #4 begins in the lava tubes as Bernard catches us up on what’s going on. Princess Nequa’s people, the Akni, are dying, thanks to something Doctor Dinosaur did ages ago. There is a cure, and to begin it, Bernard must go on a vision quest. I was not expecting this, and I am so excited. He has to collect the heart stones of three ancient and terrible guardians, as one does. And they all have punny names, which is awesome. But first, Bernard needs to learn to phasewalk.

Back at Tesladyne, Robo is trying to keep Jenkins occupied, and Foley suggests the morning workout for the interns. He converts the old hangar into a fitness complex and gets them up at four thirty (in the morning), which goes over about as well as you’d expect. He’s put together an obstacle course for them, which lands them in the infirmary. But the interns wonder who Jenkins is, and decide to hack into the personnel files. They do find his file, only to find that most of it has been redacted.

Alan is also progressing, and Robo has reached the point of agonizing about keeping him secret. It’s for his protection, but Robo doesn’t really know if he can be out in public yet. And then Lang, looking for a book of Vik’s, wanders in and finds them. She calls an emergency staff meeting (which the interns have to listen in on). But yes, Robo brought Alan back – why should they think he isn’t just going to try to destroy everything on Earth? But Robo believes that they can bring him up in an environment where he can learn better. It’s a fascinating discussion. And as the interns listen in to the scientists, Alan watches the interns.

Meanwhile, Bernard is trying to learn to phasewalk and is starting to lose hope when Princess Nequa explains that when he reached through the rock to her, he was phasewalking. She talks about how the songs of the crystals contain all space and all time, and Bernard starts to understand!

Atomic Robo: The Dawn of a New Era #4 is enormous fun to look at. The art is always energetic and hugely expressive. The lava tubes have a distinct purple tone, reminiscent of Atvatabar. Bernard varies between determination and frustration, as one might expect.

I love the poor interns in this issue. They started out having a lot of fun in addition to their work. Now they’re starting to get kind of frazzled. I suppose starting out the day with Jenkins and an airhorn could lead to that. But they’re smart and engaging, curious about what’s going on and intelligent enough to realize that there are some serious ramifications.

Atomic Robo: The Dawn of a New Era#4 is dependably fun. I just adore that Bernard is getting a hero’s journey – everything he could have dreamed of, right? There is a constant sense of, “What could possibly go wrong?” followed by the most interesting twists.