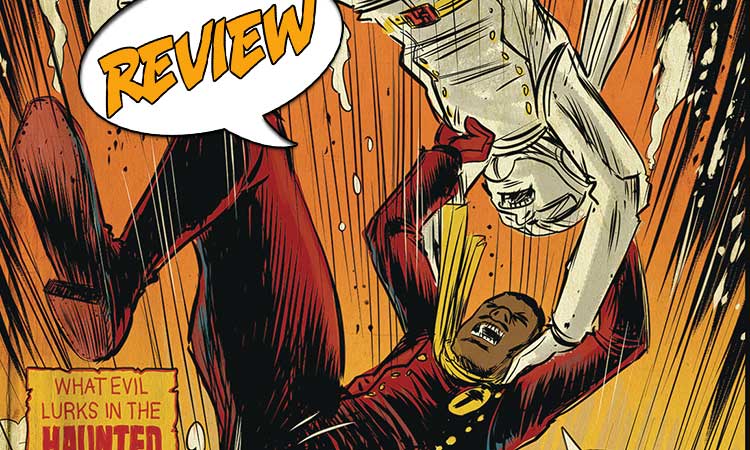 In the present, Hammer Hawthorne and Li are on their way to a mysterious memorial service and have picked up a passenger. In the past, The Black Hammer Squadron are flying a mission into Germany on which the outcome of the war may hang. BLACK HAMMER ’45 #2 is out from Dark Horse Comics. Previously in BLACK HAMMER ‘45: A present-day Hawthorne Hammer and old squadron mate Li are on a mysterious mission. Every year they memorialize this day, but why? What does it have to do with their final mission of World War II? What happened to the rest of The Black Hammer Squadron?

THE DEAD ARE NOT DEAD IF THEY ARE REMEMBERED.

Present day. Hammer and Li are still on their way to a somber, mysterious memorial, but they have picked up a passenger. Stopping at the Spiral Asylum, the winged man and World War II veteran known as Wingman has joined them, for he too is part of the unknown memorial tradition. Unfortunately, Wingman is rather verbose in his memories of World War II and his teammates in the Liberty Squadron. This does not sit well with Hammer, who angrily reminds Wingman they agreed to give him a ride if he did not relay all of his wartime memories to them… again. He angrily tells Wingman, “This isn’t your day!” which causes the old winged warrior to fall silent, for a moment.

In the past. At the end of the last issue, the three planes of the Black Hammer Squadron found themselves flying into what seemed to be a giant Norse god of Thunder, Thor, emerging from the clouds, swinging his great hammer and declaring allegiance for the master race. As the trio close in, JP begins to panic, until Hammer explains it is a Nazi trick, a cloud shaper attached to a lighting generator to give the impression of a giant Norse warrior. The team goes in for the attack, but JP’s plane’s instruments go on the fritz. But through teamwork and skill, they succeed in taking down the weapon but not without a fair amount of damage to Li’s plane. Landing in a field, it is determined that repairs to Li’s plane will take too long, they are on a deadline. Instructing Li to repair his plane and catch up as he can, the others prepare for takeoff.

Elsewhere, in a German prison camp, the subjects of a wolf-like Nazi officer instructs his men to gather all of the information they will need and to destroy the rest. The Greenbaum family, subject of the Black Hammer Squadron’s rescue mission, are ordered killed before the Allies arrive. Seconds before that order can be carried out, an artillery shell strikes the building, killing the soldiers, and freeing the Greenbaum’s for a chance to escape. But the wolf-like officer, wounded, gives chase, determined to finish them.

Nearly to their target, Hammer and JP fly over the battlefield leading to Nuremburg. They witness members of the Liberty Squadron taking the fight to the enemy and theorize it won’t be long before they liberate the city. Unfortunately, they have other problems. A small flying object, too small to be another plane, has entered their airspace. Too late, they realize the Nazi superhuman known as Die Fledermaus has entered the battle, and strikes a devastating first blow.

TO GIVE YOUR LIFE FOR ANOTHER…

From a story by Jeff Lemire and Ray Fawkes, Fawkes continues to deliver another wonderfully scripted issue this month. You quickly realize from his dialogue of Hammer Hawthrone that the old vet is not exactly a loveable guy, and that he has a short fuse. It matches with his Word War II characterization for the flyer, he is portrayed as determined and single-minded. He cares for the men under his command, but at the same time realizes men die in war. The mission comes first. Li, on the other hand, is much subservient to Hammer, seeming to allow Hammer to take the role of leader even in their old age. The introduction of Wingman is almost heartbreaking, as his rambling remembrances are familiar to anyone who has experience with a lonely elder person who just wants to matter again. The story is still hitting on all cylinders with this issue. The tension is mounting as you begin to wonder what happened so long ago, and why does it still affect the men involved?

Matt Kindt and Sharlene Kindt are still providing the same amazing art as the last issue. I am in awe of the watercolors, and just now noticed a subtle storytelling technique in them. The present-day pages have a bright white background and gutters, while the World War II sequences have a yellowed tone to them, drawing you in with the idea that the story happened in another time. This is just one example of the little things that have left me in awe of this storytelling team.

While the segments in the past are thrilling, they provide an excellent counterpoint to the somber feeling of the present day parts. Hawthrone is clearly a man haunted, while the others seem to have moved on. You almost get the sense his friend Li is humoring him so as to not hurt him more than past events already have. Even as you are enjoying discovering the history of these characters, there is a feeling of ominous dread floating over the storytelling. It makes for a tense but enjoyable read.

BLACK HAMMER ’45 #2 is still striking all the storytelling points that have made it a monthly read on my pull list. Check it out!

SUSPENSEFUL AND EXCITING! More than worth the pull list addition.