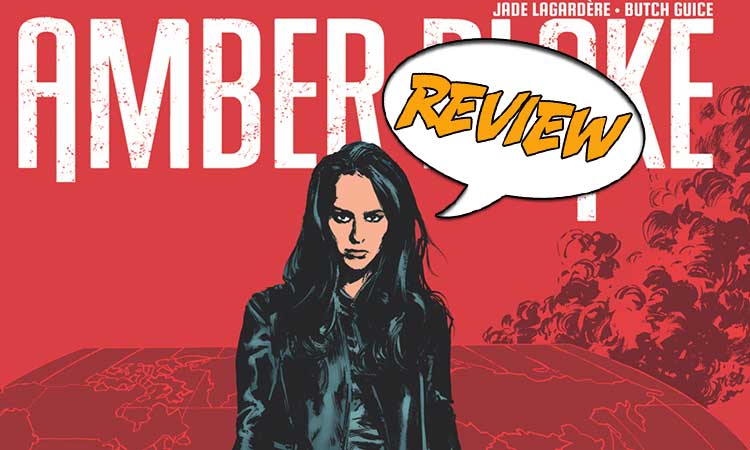 Abandoned by her mother, protected by her soon to be lover, Amber Blake looks ahead to a future bright with promise and opportunity.  But when all that is taken from her, Amber Blake is offered a chance at revenge against those who turned her life upside down.  But will Amber Blake survive her initiation into this dangerous new world …find out in our Major Spoilers review of Amber Blake #1! Previously in Amber Blake:  Abandoned at an orphanage, Amber Blake makes friends with Amanda, and the two girls blossom together.  Years later, they are chosen as inductees at Cleverland, and institute of higher learning.  However, as with all these sorts of places, dark crimes are committed, the innocent corrupted by those in charge of them.  When a ghastly event happens, Amber is given the chance to avenge her friends, but only if she is strong enough to take it.

Wow.  I mean, wow.  Amber Blake #1 goes so far all over the place you need a map, about three hundred pins and about a mile of yarn just to track exactly where it ventures.

Every badass has an origin story, and Amber Blake #1 is that story.  The eye-catching front cover promises sophisticated thrills and action, with a number of elements that harken back to 60s spy thrillers.  Unfortunately, that’s not what we get inside the covers.

What we do get is a real mess, especially in the tone of the story by Jade Lagardere.  We open with the poignant scene of a mother abandoning her daughter at the doors of an orphanage.  We then shift to a new friendship forged in the heat of conflict, as Amanda comes to Amber’s aid.  We warp forward five years where a creepy fellow visits out of the blue and announces the girls are bright enough to be inducted into (wait for it) Cleverland, an institute of higher learning.  Sexual abuse ensues, someone’s neck is snapped and another girl has her wrists slashed, and soon Amber looks to be cruising towards forced child prostitution and a stint as a white slave.

I’m not making light of the individual elements in the preceding paragraphs.  It’s all vile stuff.  But the Amber Blake #1 seems to slide from poignancy to celebration to abuse and murder with disconcerting ease.  Indeed, while your reviewer curses like a sailor, the introduction of it into this issue is so totally out of keeping with the book I don’t know where to begin.

OFF-KILTER AND NOT LIKELY TO RIGHT ITSELF ANYTIME SOON

Everything feels off.  Butch Guice’s artwork feels stilted, with characters posing like shop store mannequins displayed by staff drunk after the work Christmas party.  The dialogue is equally as stiff – we have one character proudly talking about his soon to be completed mind reading machine in the manner of a person saying they’re going out to get some milk.  It just feels…really, really bizarre.

As I said before, the tonal shifts in Amber Blake #1 come out odd times and are just unsuited to the story.  We jump from a celebratory party to a revelation of the abuse of one of the students, and then to a double murder.  In the next few pages, a near-rape occurs in two panels that will sear themselves into your mind’s eye.  If this had all been of a piece, of a dark world filled by the exploiters and the exploited, then Amber Blake #1 might’ve worked.  But the sudden shifts really bash the story around to the point where the reader doesn’t know where they stand.

BOTTOM LINE: IN A SERIOUS, BUT STABLE CONDITION

Amber Blake #1 starts as one thing, before morphing into several other things.  It’s quite a feat of storytelling, if you don’t mind your brain being ripped in two.  On the positive side, this is only the first issue, and not all is lost.  While I found the art stiff, it is very well done.  And if the near rape of the main character isn’t something you expected going in, at least the art doesn’t flinch from the horror that almost comes.  Given this is a first issue, there’s enough time for the series to be salvaged, if only the writer can decide on what exactly he wants Amber Blake to be.

A mess, but one with some promise. Amber Blake #1 feels a lot like a try out for what works, and what doesn’t. Hopefully, Jade Lagardere has worked out exactly what sort of story he wants to tell, and sticks to it for the remainder of the run. If he doesn’t, Amber Blake may simply fade away, which would be a crime.