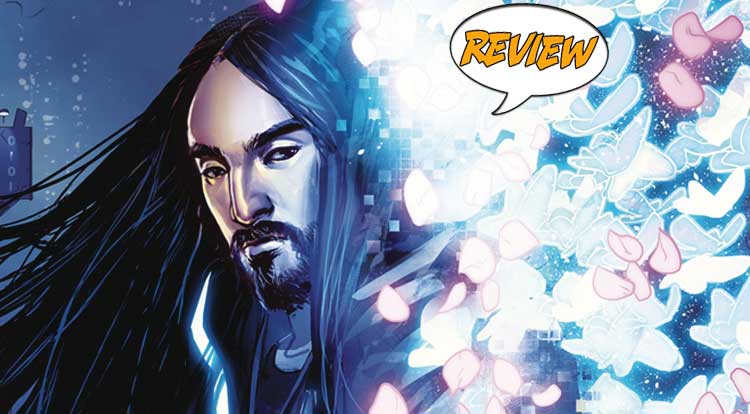 Thirty years in the future, the resistance movement known as Neon Future protects the innocent and works to live in harmony with technology…  Your Major Spoilers review of Neon Future #1 awaits! Previously in Neon Future: The world is in the grips of an economic crisis.  Due to mass unemployment, advanced technology has been outlawed.  The world is now divided between those with implanted technology and those without.  When the world’s most famous anti-tech crusader dies and is resurrected using the illegal technology he has sworn to eliminate, he must decide who to fight with his terrifying new powers.

We open with a news report, explaining the death of Clay Campbell, after which someone opines that he’s GLAD to see a famous person deceased.  Cut back a couple of weeks to the point where Clay’s body was being evacuated, only to be intercepted by a massive bald due named Mars and his band of cyborg merry men.  Campbell’s barely living form is taken to a surgical theatre owned by Kita Sovee, the brains of the Neon Future outfit, and implanted with extensive cyborg technology.  Clay awakens in a strange digital landscape (which, by the way, is beautifully colored and drawn) and told that he has a choice:  The blade or the butterfly.  A war is coming, and Clay has to choose his side.  Naturally, Kita hopes that he’ll be an asset for Neon Future, and as the issue ends, Clay gets attacked by a masked enemy and activates his psionic implants for the first time, realizing that his world just got much larger.

FAMILIAR, BUT NOT BAD

While I have seen elements of this story many times and the cyberpunk future is a pretty well-worked setting at this point, I have to say I liked this story and the way it unfolds.  Clay’s seeming death and rebuilding has elements of ‘The Matrix’ and other stories, but strong dialogue and pacing provide freshness.  The strength of the art and coloring also helps to keep things feeling new, and the visuals of Clay’s cyberspace awakening are pretty incredible.  There’s clearly more to Kita’s plan than meets the eye and having the man who dedicated his life to eliminating technology as a potential recruit to the team is a nicely ironic bit.  All in all, it’s an issue that makes me want to read more, and I’m really impressed with what this creative team has put together.

In short, though Neon Future #1 is playing on some familiar ground, it’s got a lot of metaphorical game, with excellent art and dynamic coloring, as well as some nice work from the writing team, earning a better-than-average 3.5 out of 5 stars overall.  It’s not always easy to play within the confines of such a specific genre without feeling like a retread, but this book pulls it off with style.

A lot of familiar elements with some new twists, all delivered with excellent art. This book has tons of potential.