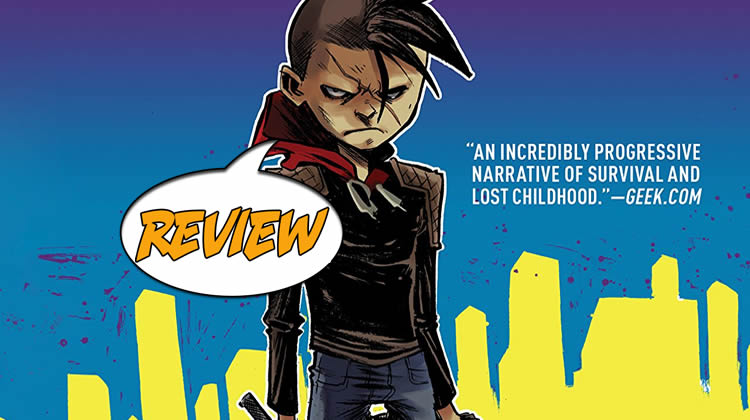 The Ballad of Sang OGN Review

It’s always great to see an excellent writer’s career blossom. For instance, Ed Brisson caught my attention with The Mantle, a unique take on superheroes. Since then, he’s been writing a lot of wonderful comics, including a lot of Marvel books, and has had well-deserved success.

I find it fun to explore the world-building imagination of such a writer, and that leads me to the collected edition of his book The Ballad of Sang, just released from Oni Press. I had missed the individual issues, but it was something special to read it in trade paperback form. THE BALLAD OF SANG OGN

SOLICITATION: Hit writer Ed Brisson (Old Man Logan, Cable) and newcomer Alessandro Micelli present a homage to Takashi Miike films with THE BALLAD OF SANG, the story of a child assassin raised in violence and out for revenge after his master is murdered. When a mistake on a job brings the wrath of Don Minchella down on him, Sang barely escapes with his life. While Sang swears revenge for his fallen mentor, every gang in the city mobilizes to return him to Minchella… dead or alive.

ACTION AND CHARACTER PERFECTLY BLENDED TOGETHER

Now, I have to admit that I haven’t seen the Takashi Miike films this book reflects, but that didn’t stop me from enjoying it! For instance, I liked the fact that the main character was a young boy (somewhere between 8 and 12 years of age, seems like), and he finds help from an adult woman willing to stand up for him when she realizes what he’s been going through. Add to that the fact that Sang is mute and doesn’t speak, and you get quite a touching tale of conflict and compassion.

The character moments are indeed heart-wrenching, including having Sang have to write out everything he wants to communicate. When we read what he’s been through and how he’s become the skilled assassin he is, well, it really pulled on my heart strings. The reaction of Lucy to his story helps us understand it all as well.

When Sang goes to far and kills someone he was supposed to frighten, a contract is put on his head, leading some of the city’s oddest gangs after him to collect. The fun ones are the Vexxed and Black Eyed Betties, both deadly but having quirks that makes you actually kind of like these groups. When we find out that Lucy was once working with the Black Eyed Betties, we get an emotional component added there as well.

When the action hits, it’s fast and furious, to coin a phrase, and all the stops get pulled out. The weapon of choice for Sang is a sword, and he uses it to strong effect, often chopping off the hands or even arms of the people he’s confronting. He cuts off the arm of Minchella, and the Boss wants it back and is willing to pay for it.

It’s a great story of character development, too, as we see what Sang really wants, which isn’t the life he’s currently being forced to lead. Will he reach the way of living he really wants or will he remain in a life of crime? You have to read the entire story to find out!

I always want to compare two aspects of art when I review a comic: Character and their expressions, and action sequences. Micelli’s art is a little sketchy for my tastes, but you simply can’t take your eyes off it.

We can clearly tell who is who, immediately a plus! Then we understand what each person is feeling and what’s going on inside as well. I even liked Sang’s pouty face! The action sequences are terrific, keeping me engaged and in awe of how well crafted they are. Well done!

BOTTOM LINE: An OGN Not to Be Missed!

As I mentioned, I got to read this story in the collected edition, which pulled me in and wouldn’t let me go! Even when the action sequences are concluded, I was fully engaged in the dramatic moments among the various characters.

Unlike many comics, this one actually has a satisfying and enjoyable end! I don’t get to say that very often as a reader! There is room for Sang to return, but even if he doesn’t, this complete story was a powerful one, and I highly recommend it!

The Ballad of Sang OGN

I find it fun to explore the world-building imagination of such a writer as Ed Brisson, and that leads me to the collected edition of his book The Ballad of Sang, just released from Oni Press.